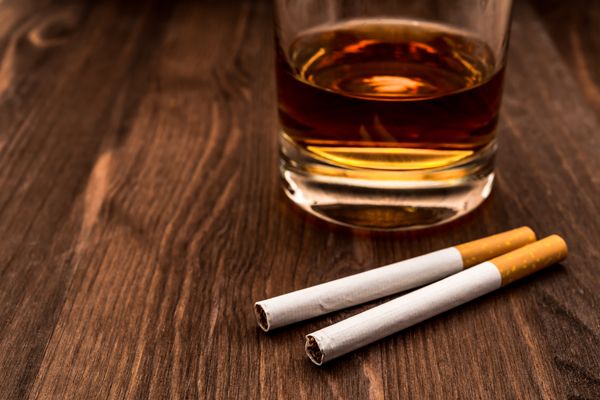 Drinkers and smokers are being hit hard once again in the proposed States Budget for 2017, with cigarettes facing an 8.1% increase, or roughly 43p on a pack of 20, and alcohol going up by around 5% - more than three times the current inflation rate. Users of hand-rolling tobacco face a whopping 10% increase.

And motorists will be sharing some of their pain, with fuel also set to go up - the Treasury Minister wants to add 2p to a litre of unleaded, an increase of 4.2%, in a measure which he hopes will bring in an extra £921,000.

The Minister also confirmed that plans to move to 'independent taxation,' where each person is responsible for their own tax rather than wives being included on their husband's tax assessment, has been shelved until 2019 at the earliest, while the Taxes Office gets new computer systems. Currently, they are building a 'model' of how it might work.

In other taxes, Senator Maclean is proposing a new 'mansion tax' with owners of properties worth £3million or more paying an extra 1% in stamp duty, rising to an extra 2% if the house is worth £6million or more - he hopes this will swell the States coffers by around £220,000 extra each year.

Once again, the exemption limit, which means anyone earning below that number doesn't pay tax, will be increased by the June 2016 RPI figure of 1.5%, setting it at £14,550 for a single person, and £23,350 for a married couple - that means approximately 30% of the population don't pay tax at all, and the top 10% of earners pay more than half of the total collected from personal tax.

Other personal tax measures include increasing the maximum child care tax relief for pre-school children from £14,000 to £16,000 to encourage parents back to work, as well as increasing the allowance given to 'second earners' from £4,500 to £5,000.

The Treasury Minister also took the opportunity to warn that penalties for tax evasion were going to be beefed up, and so the Treasury would be offering a one-off 'tax amnesty' from April to December 2017, so that Islanders can tidy up their tax affairs.

“This Budget helps lower and middle earners by increasing our generous tax free allowances for personal income taxpayers by the rate of inflation. This will increase the amount people can earn tax-free, which leaves taxpayers on the Marginal Rate with more disposable income.

"We are helping working parents with the cost of child care and we are reducing the tax paid by working couples who are married or in a civil partnership. This change improves fairness between married and unmarried working couples and encourages work.

“At the same time we propose to increase duty on tobacco, alcohol, fuel and vehicle emissions. These items damage our health and environment and put pressure on public finances.”

The Budget includes £65million of capital spending for 2017, with the biggest amount going on Les Quennevais School at £39million, with the new computer system for the Taxes Office coming in at £8.4miilion. 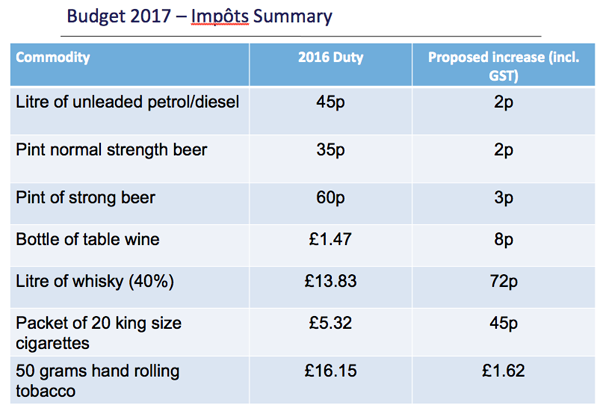 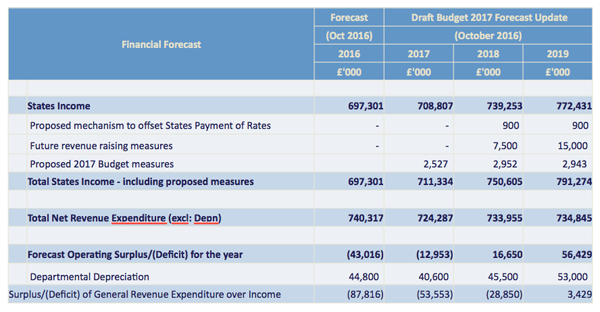 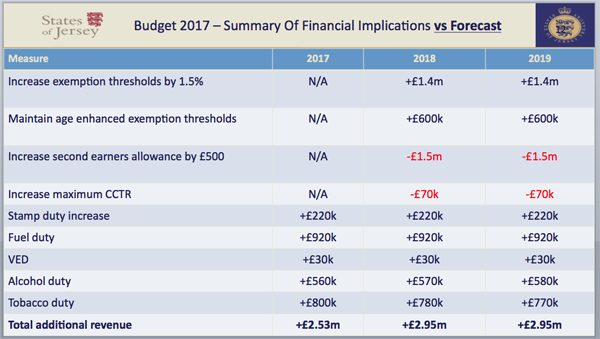