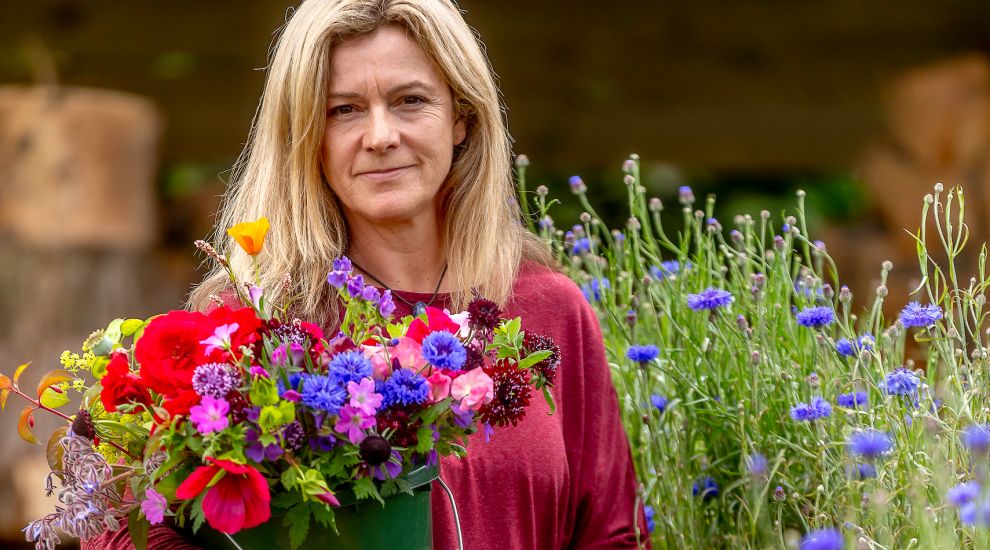 Next time you buy a beautiful bunch of flowers, it’s worth remembering that the chances are those flowers will have travelled hundreds or even thousands of miles and been grown in conditions some might say are not very green.

One woman, whose dream was to start a business that allowed her to pursue her love of gardening and being outdoors, is proving that you can grow beautiful flowers here sustainably. Elise Stubbs is part of a network of farmers in the British Isles who are growing cut flowers. Chris Rayner went to meet her at the Jersey Flower Farm in Sion.

These days we are used to seeing patches of flowers along roadsides and within our communities to attract the pollinating insects we need to keep the planet’s ecological systems functioning. Habitat loss, climate change and the effect of human activity have brought a greater focus on how we can repair some of the damage. Sion just happens to be home to two enterprises that have that focus and sit next to each other. One is Thrive Jersey’s Grow project, and the other is Forge Farm, home to Elise Stubbs’ Jersey Farm Flowers business.

Just off the main road through Sion, Elise has transformed a small field into a farm for cut flowers. It’s immediately clear that the land here is productive, but unlike many other commercial operations, it is managed in a way that is in balance with nature.

Elise, who turned her back on a life spent working in an office, has combined her creativity with her dream of working outside. 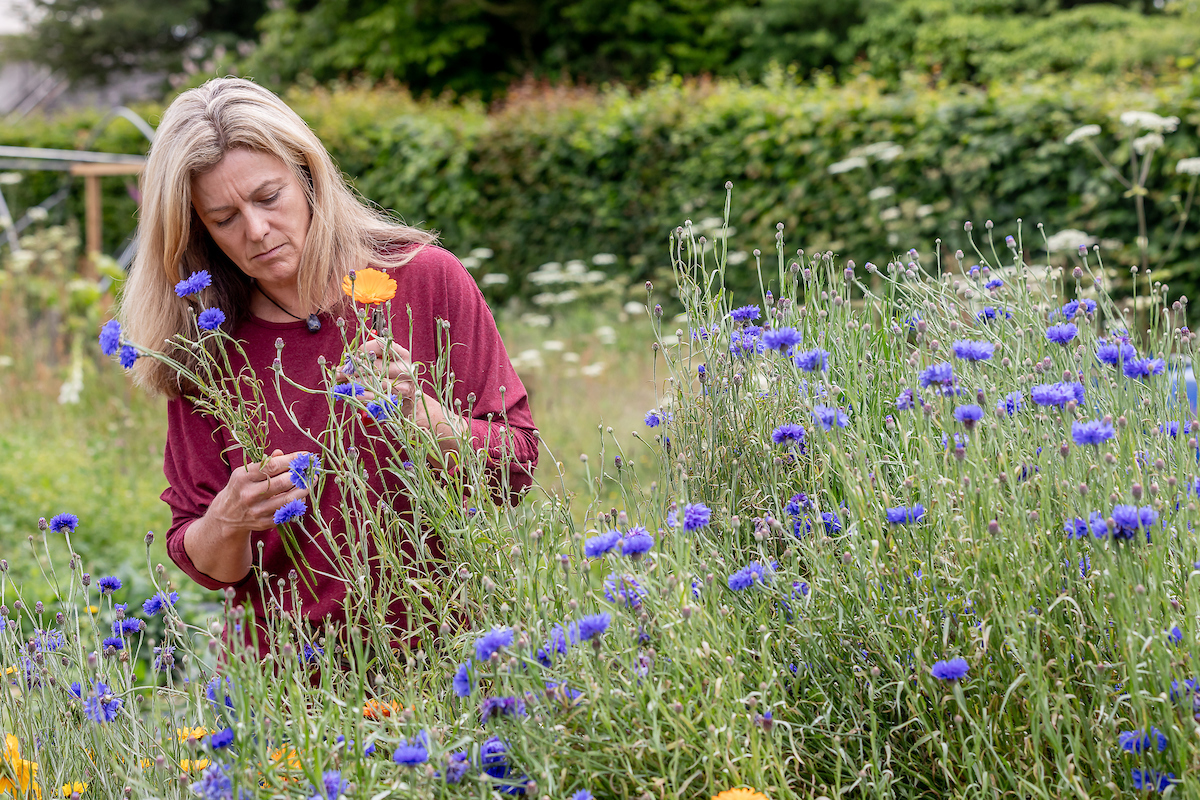 Pictured: Elise has always been a gardener and loves being outside and turned her back on office life.

“This is bliss,” she says as I am shown first ‘the Field,’ a beautiful extension to her garden where she grows her flowers, and then the shed where she makes up her orders and hangs flowers for drying. The smell of mint and other herbs mixes with the scent from the flowers cut only moments ago a few yards away.

She’s right, it is bliss and a year-round labour of love.

“I’ve always been a gardener and loved flowers. When I went away to college at the Chelsea School of Arts, I did a degree in Printed Textile Design, so I have always been a designer at heart. I used to draw flowers for a living, working as a floral textile designer in London for a company that supplied designs mainly for America and Japan. I loved the artistic side and learned about balance, texture and colour but I hated sitting still.”

Pictured: She describes being in the field as "bliss".

As you might have guessed, Elise likes to be moving around, preferably outside. The idea of working in an office now is not something she would contemplate. The lifestyle that she and her husband Neil have designed, suits the family and is only just up the lane from where she grew up.

“I’ve done lots of office jobs just to get us on the ladder, but this works around the family. I always wanted to do this, but we didn’t have the place to do it and it wasn’t until ten years ago we managed to get this house. It was derelict but I wanted it because of the Field.”

And that area has become a haven for wildlife as well as flowers, who are destined for floral arrangements but still do their job providing nectar for the bees and other insects. There are owl boxes, dry brushwood for hedgehogs to shelter under and Elise has picked up a couple of second-hand pond liners which will provide more habitats for wildlife.

“There are some farms in England where they are re-wilding areas and they have found that birds that haven’t been seen in years have returned in numbers. My challenge is to get glow worms back in our lane. As a kid, I remember the glow worms and I haven’t seen one since. We don’t spray so perhaps this will be an indicator of whether what we’re doing here is right.”

Everything she does at the Jersey Flower Farm is aimed at working with nature. It’s a seasonal enterprise that makes the most of our mild climate with everything that’s sold and supplied grown right there with no imported flowers. Only natural fertilisers are used, such as vraic gathered from Elise’s favourite coastal swimming spots as well as manure from other Genuine Jersey members. 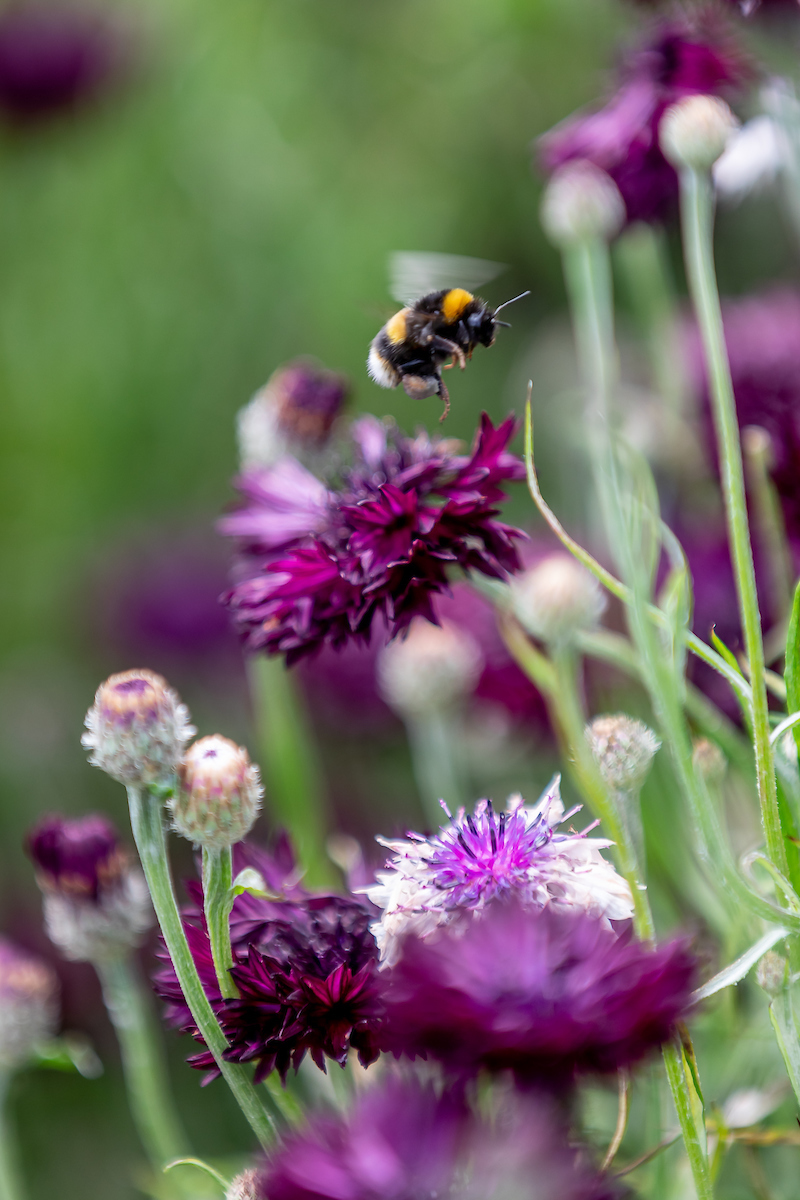 Pictured: Elise tries to work with nature, recycling waste and making the most of local climate and resources.

“I try my hardest to recycle and use other people’s waste. I’m collecting used coffee grounds from Coopers Coffee, which go in the compost, and I use their coffee sacks to suppress weeds in the long flower beds.”

Her flowers have provided stunning displays of fresh natural flowers at weddings and provided colour at island events, most recently on the tables of the Platinum Jubilee High Tea on the High Street. Last year she was asked by Government House to make the seasonal bouquet presented to Princess Anne.

Growing her flowers is her passion, and because of that, she has stepped back from making amazing floral displays for weddings, instead supplying her locally grown and chemical-free flowers to local florists and offering DIY wedding flowers for brides who want to make their own floral arrangements. There’s also a subscription service for those who want to experience her flowers throughout the season. 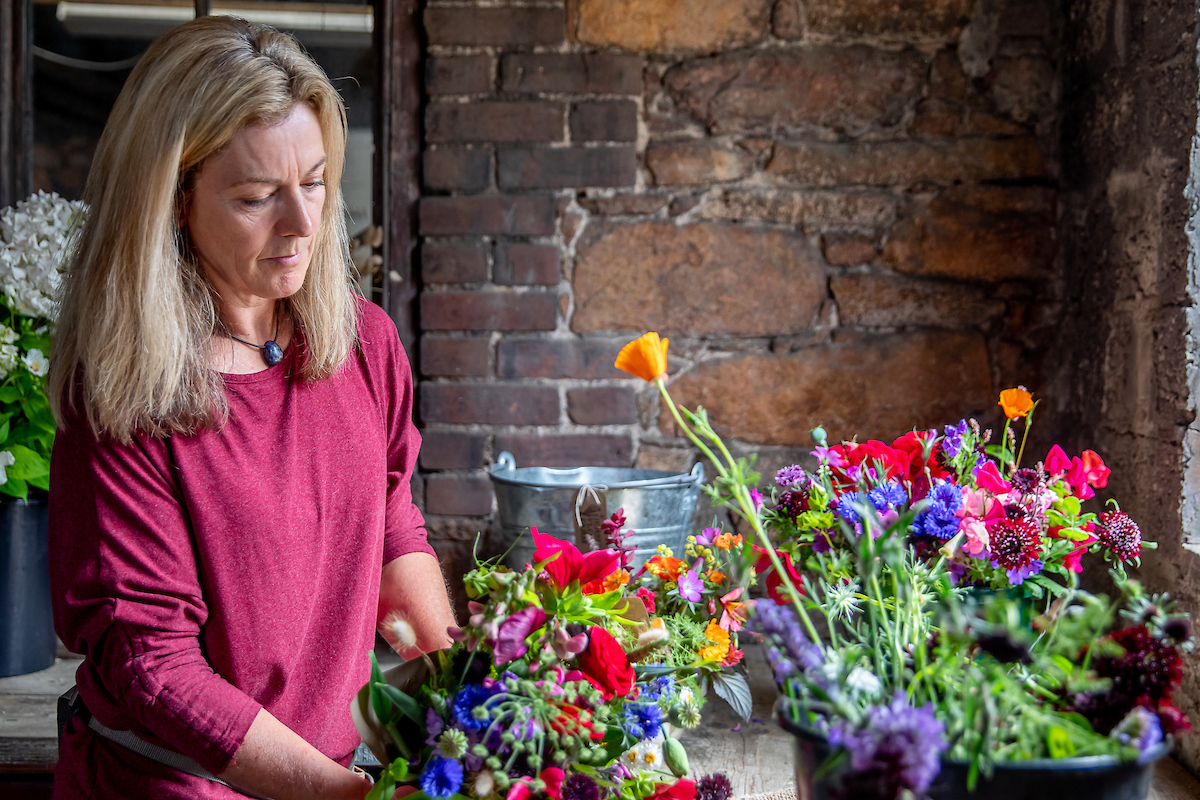 “I have some lovely ladies who are really into their flowers, and I offer a flower arranger’s wrap, which is made up of a cross section of the flowers from the Field. They get a certain number of stems, and they take them home and arrange it themselves. They love it and post photos of their amazing creations. I do that weekly and sometimes monthly depending on their budget and they really look forward to it.”

Elise is also continually boosting her knowledge and trying new techniques. During lockdown, when the demand for cut flowers dropped, she completed a Permaculture Design course. As she explained, permaculture is all about getting nature to do the work.

“To most people this would probably be too messy but actually, it’s really workable and I can get a lot out of growing in this way. The idea is to plant in zones, so the things that need the most attention are closer to the house,” she explains. “Working with the seasons, small sections are planted that help the biodiversity of the Field. If I am planting the same flowers, I will grow them in different areas. While one may get blackfly, it won’t attack another and that’s how I am able to offer flowers throughout the season.” 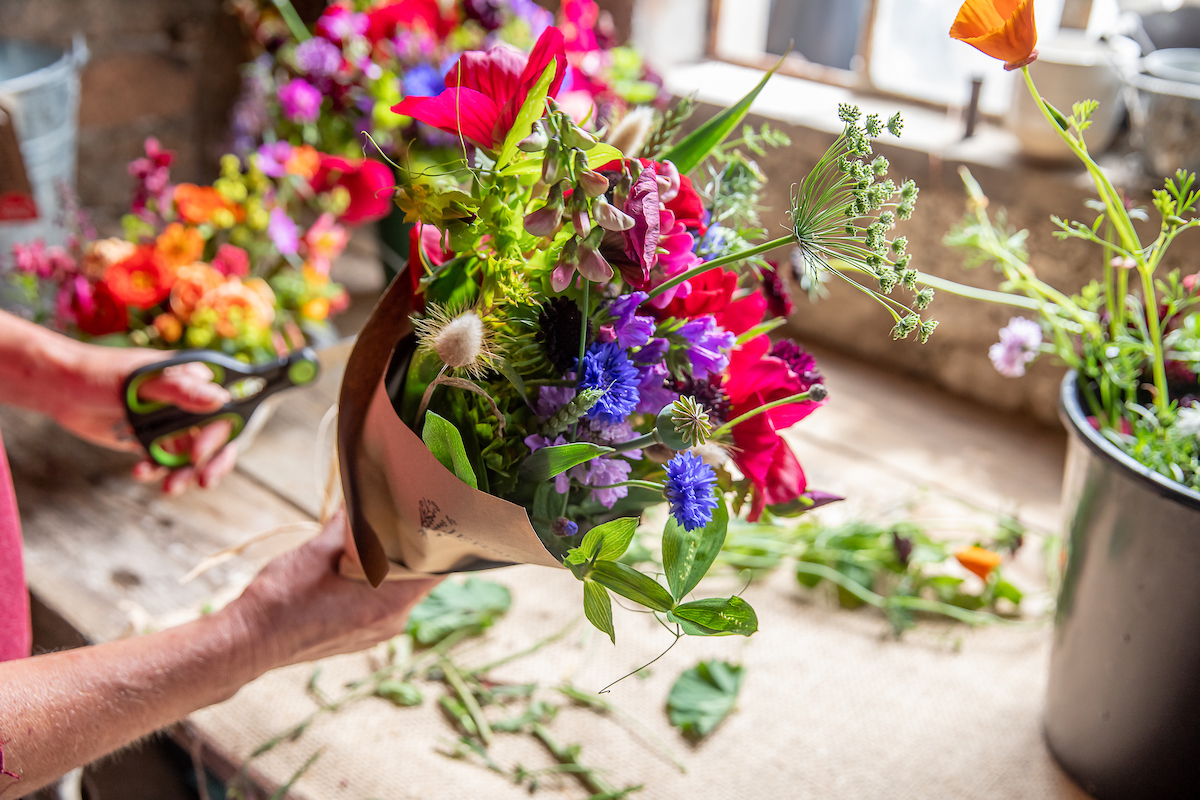 Pictured: Last year, she was asked to make the seasonal bouquet presented to Princess Anne.

Other techniques include using what are called dynamic accumulator plants such as comfrey, stinging nettles, borage and dandelion which, rather than be viewed as weeds, are an easy way to add nutrients to the soil. Companion planting also helps build resilience and reduce pests.

“When you plough the soil, it breaks up the living web of micro-organisms that’s in the soil. So, if you use a different technique that doesn’t disturb the soil, the carbon is kept in, and it enriches soil diversity, reduces erosion and the need to use pesticides. I use cardboard and grass cuttings underneath to kill off the weeds. It’s almost like a lasagne layer. I do that in the Autumn and by February or March the soil is ready, and I haven’t had to plough.” 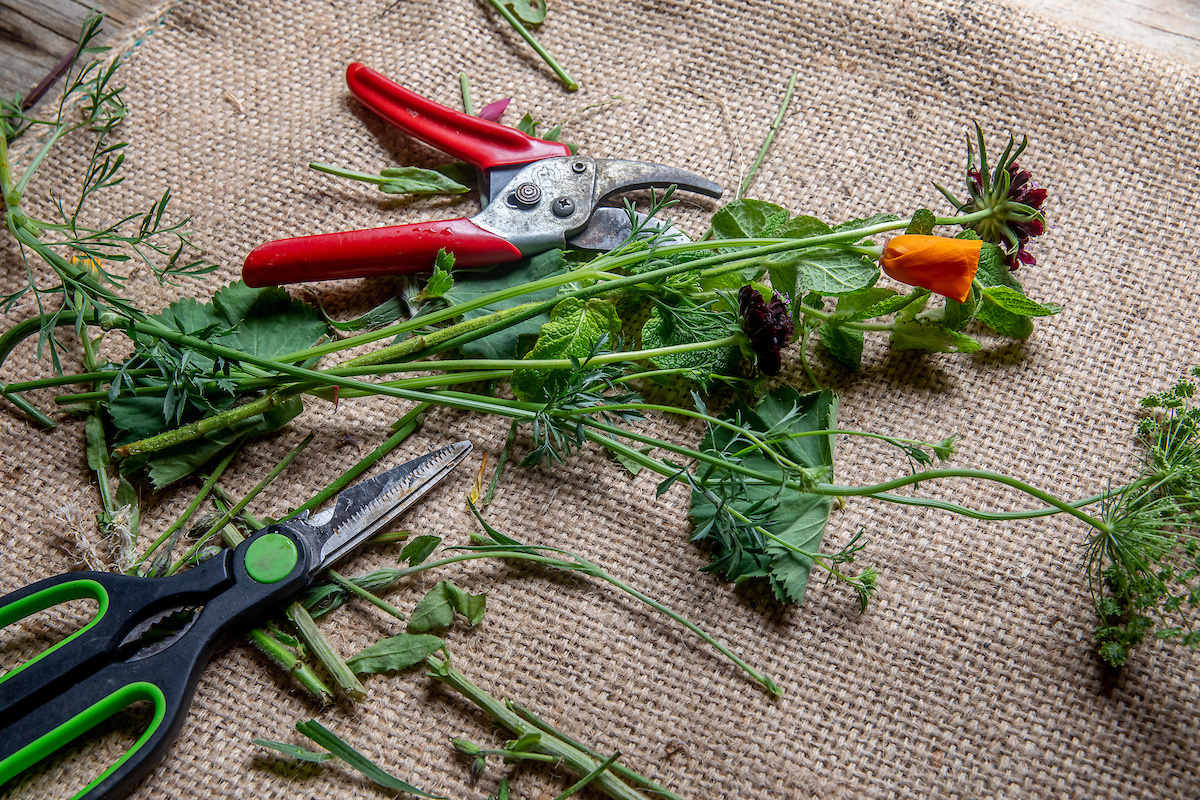 Elise is a member of a group that’s trying to revive the cut flower industry that’s faced competition of year-round imports from abroad. Flowers from the Farm UK is an award-winning membership association for artisan cut flower growers.

“It's a movement that’s taking off and everyone is helping each other. We are trying to get a market back in the UK rather than relying on the imports from Holland. It’s a big network and I’ve had enquiries from the UK and Australia who’ve seen me on the Flowers from the Farm website and want to send some flowers to a relative over here.”

Wandering through the Field, it’s easy to forget that this is a farm and not a family garden. Elise is here every day tending to her plants and making up the orders from customers.

“This is 24/7. I can’t get away from it. Even on a Sunday I’m doing things,” she laughs. “We put a table and chairs in the garden near the house. This area was our lockdown project and once we’d finished it, we put the table and chairs there just to get us to sit down. But it’s not worked!”

This column first appeared in Connect Magazine, which you can read in full HERE.

The August edition is dropping on Monday - sign up here to make sure not miss it.