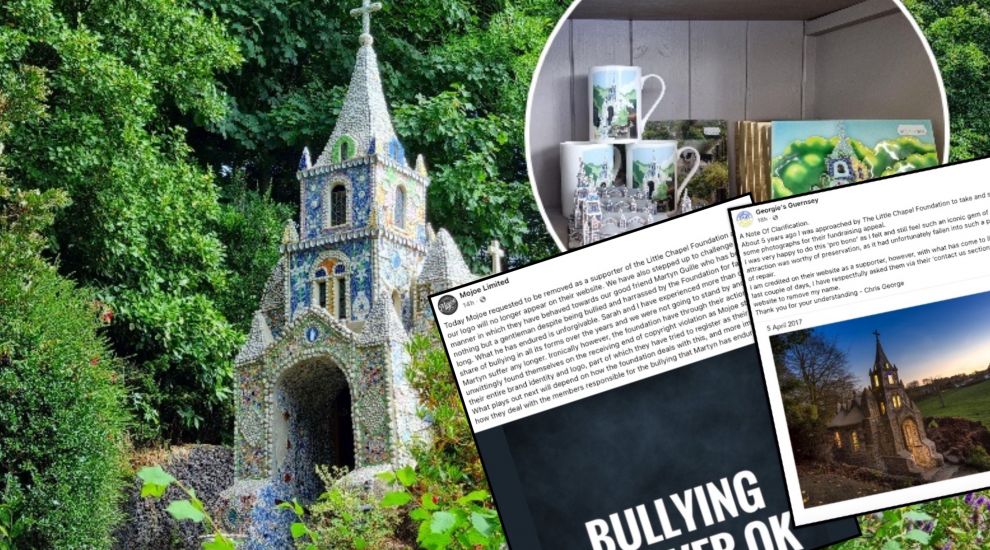 The guardians of Guernsey's iconic 'Little Chapel' have spoken out for the first time since their legal action against an independent souvenir seller was revealed - sparking significant public backlash and a decision by some businesses to pull their support.

A public statement has been released “with the unanimous agreement of the Foundation’s Councillors”, maintaining that some products sold by Martyn Guille Silversmith’s can be easily confused as conferring a direct charitable benefit to the Little Chapel.

“Our volunteers have encountered many visitors who believe they have supported the Foundation because they have purchased 'Little Chapel' branded goods from Mr Guille's shop. Obviously, this is not the case,” the Foundation said in a statement.

But it claimed it has “no desire to contact” other vendors who sell Little Chapel merchandise across the island, suggesting that the close proximity of Mr Guille’s shop to the attraction creates “a perceived link between the Foundation as a charity and his privately run business”.

The Foundation accused Mr Guille of failing to meet with them “over the last five years”, saying all of its invitations were “rebuffed”.

It said it hopes good relations can be fostered in the future, however, through “a spirit of co-operation befitting of Brother Déodat’s legacy and the Chapel’s spiritual heritage”.

It also rejected speculation that charitable donations might have been used to fund their legal costs.

“Every donation received and every penny spent by the Foundation is applied towards the restoration work and the maintenance of the Chapel."

The Foundation has declined to answer additional questions on the matter “until further notice”. 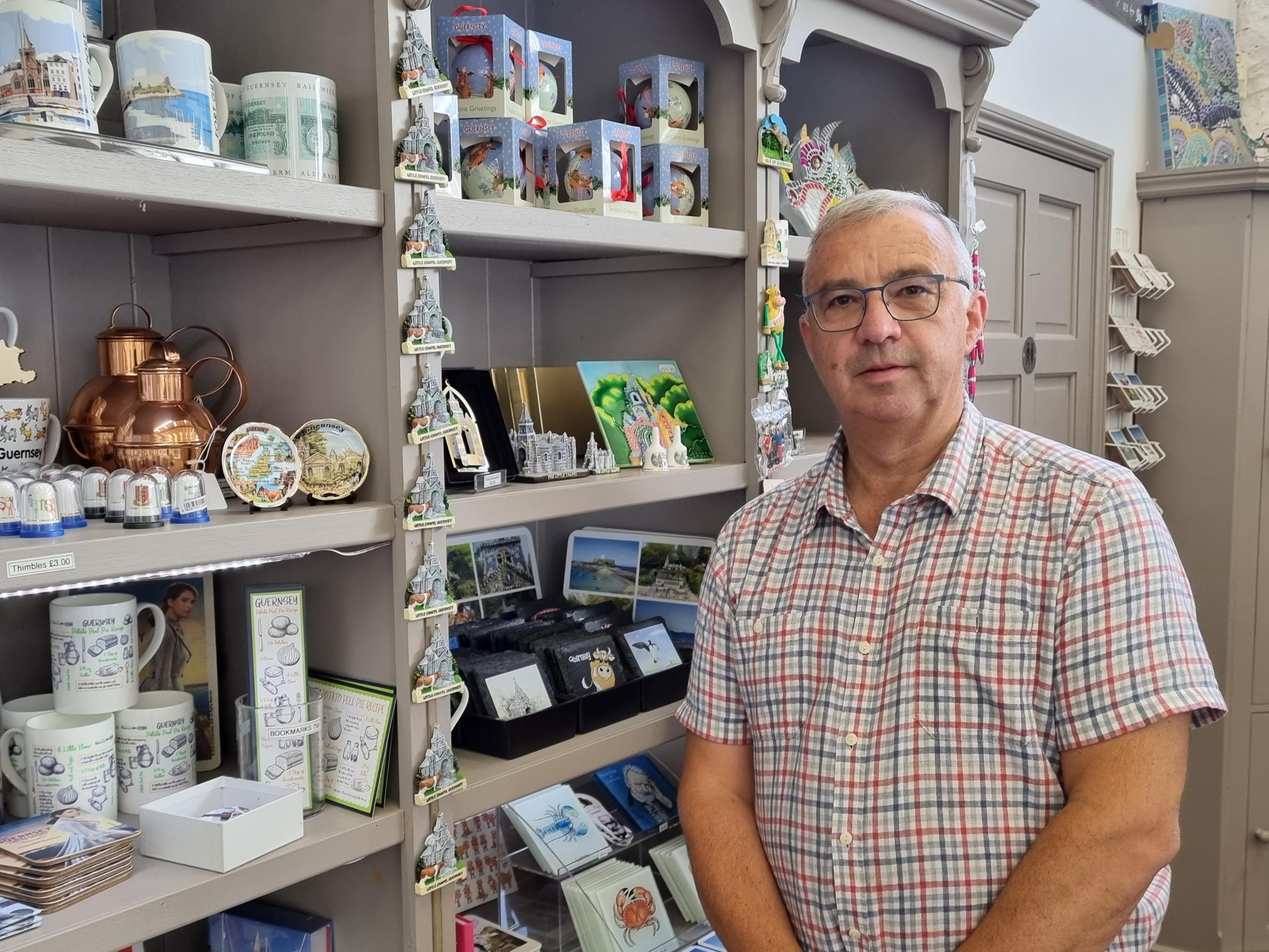 Pictured: Martyn Guille has been accused of failing to cooperate with the Foundation.

The Foundation argue it is not “personally attacking” Mr Guille, saying its councillors “have a legal obligation to act in the best interests of the Little Chapel at all times and to protect its assets”.

Hopes of avoiding legal action “did not prove possible”, and it noted that Mr Guille had “chosen” to address their concerns “via the media”.

The Foundation estimated that around 70,000 people visit the site each year and that “this valuable footfall naturally flows to Mr Guille's business, and for some visitors, it may appear that the business is directly connected to the Little Chapel Foundation”.

It also rejected insinuations that it is attempting to commercialise the attraction, and bemoaned abuse directed at its volunteers by some in the community.

“The Foundation endorses the view that the Little Chapel should continue to be available for everyone to enjoy, both now and for generations to come.

“None of the Foundation Councillors is paid, nor indeed are any of our pro bono community partners, such as our advocates, architects and surveyors, all of whom ask for no payment for their professional services.

“They have been subjected to a totally unacceptable level of personal abuse. Enormous pressure has also been applied to long term, loyal and much appreciated Chapel benefactors.”

Since the story emerged, several public associates to the Little Chapel Foundation have withdrawn their support.

Amongst them is Joseph Smith of Mojoe Ltd, who designed the logo for Foundation which it is now attempting to trademark through the registrar.

He accused the charity of bullying and harassing Mr Guille, saying: “We were not going to stand by and watch Martyn suffer any longer." 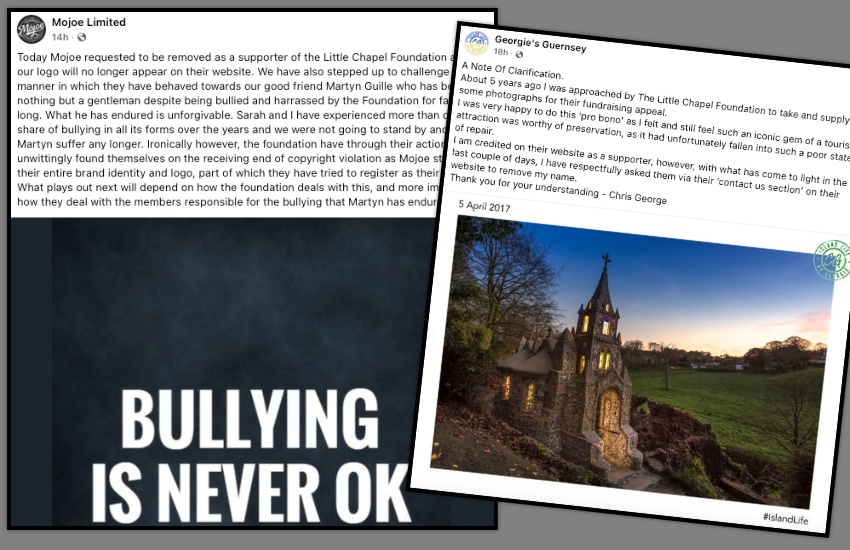 Pictured: Two local businesses revealed they had disassociated with the Foundation in social media posts.

Mr Smith believes he legally retains ownership of the creative assets used in the Foundation’s branding, and said its actions have inadvertently placed themselves “on the receiving end of copyright violation”.

The Foundation has denied themselves the opportunity to respond to questions over whether Mr Smith’s claims are legitimate.

Photographer Chris George, who supplied free photographs when the Foundation began its fundraising drive to repair the Chapel, has also withdrawn public support.

“With what has come to light in the last couple of days, I have respectfully asked them via their ‘contact us section’ on their website to remove my name,” he said.

Both of their company logos no longer appear on the ‘supporters’ section of the Foundation’s website.