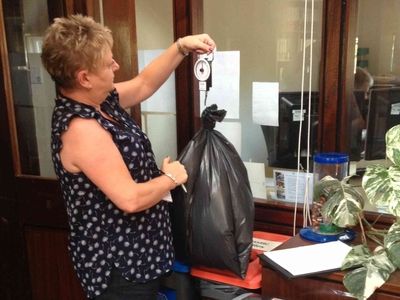 Jersey businesses are being encouraged to audit their rubbish to reduce the 100,000 tonnes of waste produced on the Island each year.

A new Eco-Active campaign calls for companies, plus States departments, schools and community groups, to carry out a waste audit to make staff more aware about what rubbish is being produced and how it can be recycled.

Eco-Active Programme Manager Jane Burns said: “People don’t know how much they throw away. This campaign is about giving people really simple ways to recycle more and produce less waste.

“As an island 100,000 tonnes of waste is a huge amount to produce and the aim is to reduce that.

“People don’t like the idea of going through their colleagues’ rubbish but this kind of audit is quite simple as you can see how much waste your company is producing just by weighing it.

“It’s also about getting people to think laterally. If you don’t have a bin under your desk and have to get up to walk to communal bins you end up thinking more about the most appropriate bin for the item.”

The audits are supposed to help staff understand how much waste their company produces, to demonstrate how much waste they already separate for recycling, to identify what can be improved and to provide targets to measure this against.

Transport and Technical Services Department Recycling Manager, Emma Richardson-Calladine, said: “Knowing what you throw away is essential if you want to waste less and recycle more.  It’s often the simplest of steps, like printing double-sided, that can make big changes to reducing your waste and saving you money. “

The Eco-Active posters and film are also designed to demystify what happens to waste and recycling collections in Jersey.

Jane said: “There are conspiracy theories in Jersey about what happens to the waste collected for recycling and some people believe it all just goes for incineration. It doesn’t.

“One of the island’s parishes uses the same truck for collecting waste and recycling and that confuses people, but it’s more efficient than having two separate trucks.”