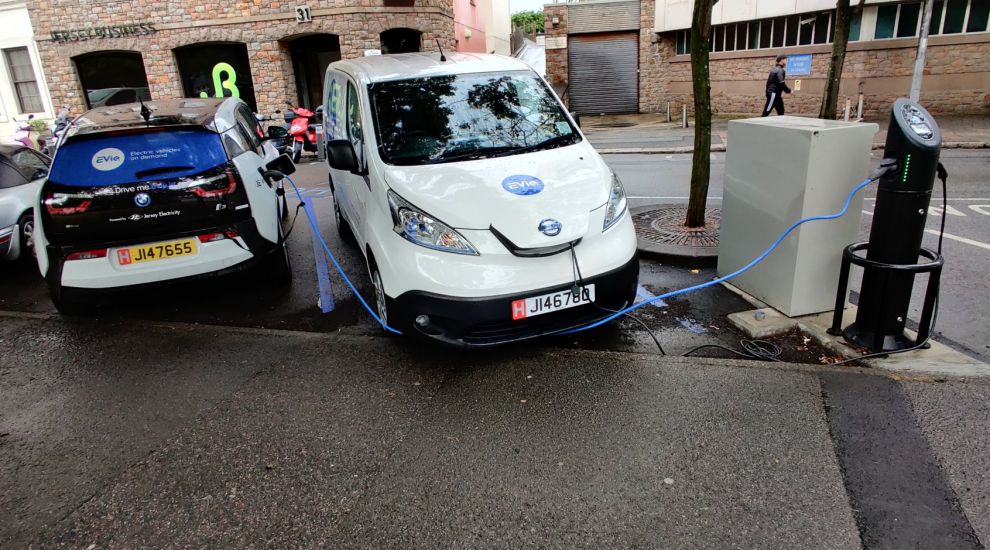 St. Helier is reviewing the position of a charging point for electric cars after concerns were raised about its safety.

A photo posted on social media showed a long cable charging a car pulled across the front of an electric van in the area of the Parade, close to Cyril Le Marquand House.

Another suggested that it would make more sense to have a charging bay each side of the station rather than two on one side.

Now the Parish of St. Helier, which chose the location of the black charging point, its associated grey box, and the two blue-lined parallel charging bays, says the arrangement is under review.

Surely this isn't safe, certainly not legal!
Why wasn't the charge point between the two spaces?
That van should surely not be reversed out onto the road at that angle (especially risking dragging the other car's strewn cable)
Really poor design @Deputy_Lewis pic.twitter.com/ksPOdC7poY

Parish CEO Jason Turner said: “It would certainly be a reasonable suggestion to move one bay to the other side; it might also be sensible to lengthen the charging cable, so it runs along the ground rather than across the van.

“We are keeping this under review and will continue to liaise with EVie and the JEC, who installed the point, about making improvements. Electric vehicles have plugs in all sorts of places so having a long cable will probably still be necessary. The bay on the other side is reserved for GPs so we need to look at that too.”

EVie director Gavin Breeze said that it was not a public charging point and the spaces were only used by company vehicles and staff.

“We didn’t choose this arrangement, but we have an excellent relationship with both St Helier and the JEC and we’re always keen to make improvements if possible,” he said.

Posted by nigel pearce on Jul 31st, 2020
Hardly a difficult decision to make: swap the doctor's reserved bay with the second charging bay. Hopefully they won't have to get a consultant in from the UK to advise them!
Posted by Jon Jon on Aug 3rd, 2020
Why I’ll keep my diesel!
Posted by The old git Git on Aug 4th, 2020
Well Nigel that just shows what happens when you don't get the UK consultants in before going it alone. Maybe our local safety officers weren't consulted either.
To place a comment please login Login »