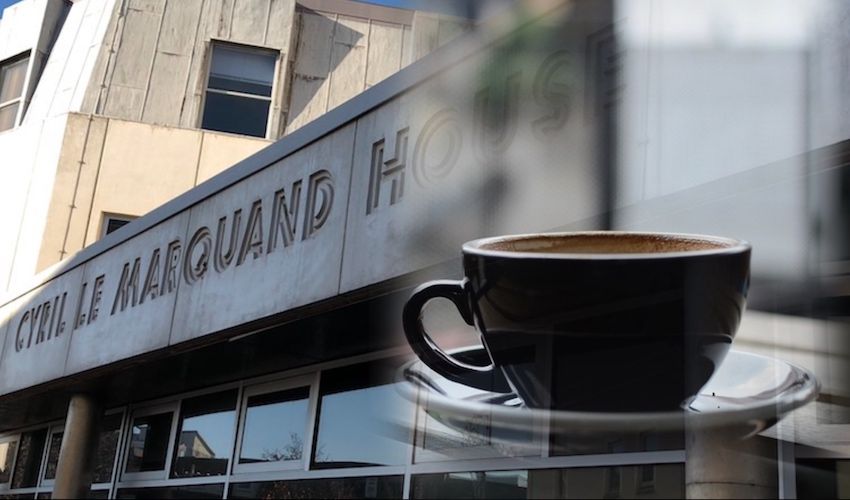 The government's former HQ is on course for transformation into a café, housing or a tribute to one of the island's longest serving post-war politicians.

Issuing a draft document outlining all the potential uses for the former headquarters for many civil servants, the Environment Minister has suggested various schemes to regenerate the area around Cyril Le Marquand House – including housing, eateries and a public art piece.

The former government HQ used to house the Taxes Office as well as many other departments, but became defunct after the civil service relocated to Broad Street last year.

Former Senator Le Marquand was a States Member between 1948 and 1980 and the President of the Finance and Economics Committee from 1957 and 1980.

Now, the Environment Department is contemplating what to do with the old office building, and is consulting islanders on the subject.

Among the preferred schemes in a 'Planning Guidance' document issued by Environment Minister Deputy John Young are keeping the site as offices or transforming it into accommodation with some retail and restaurant spaces attached.

The document states: “A key issue for the redevelopment of this site is whether it continues to provide office accommodation or whether it is redeveloped to provide an alternative use.”

Referring to the possibility of introducing a retail or café element to the site, the planning guidance reflects: “This might serve the users of the site whilst also making a positive contribution to the life and vitality of activities in and around the ground floor of buildings on this site and make a positive contribution to the enlivening the street scene and the adjacent public space at Parade Gardens.”

Pictured: The site could have some retail or cafe elements introduced through the redevelopment.

It's also suggested that some artistic elements of the redevelopment could pay tribute to the building’s namesake. A plaque on the current site reads: “This building is named in recognition of the outstanding services rendered to the island of Jersey by Senator Cyril Le Marquand.”

The planning guidance says: “Given that the existing building on the site was named in honour of the contribution of the former States Member… to public life, this might be references within any redevelopment proposals for the site and/or through any artistic input to its design and implementation.”

Islanders will be consulted on the proposals before a planning application is made.

Posted by William Boyd on Feb 24th, 2020
Cyril House and the 2 Hue Court blocks are a disgrace with no architectural merit whatsoever. Well they could go in for and probably win a "what not to build' building contest. All 3 should be knocked down but I see we are refitting the 2 Hue Court eyesores. Can we not (safely) clad them and put on sloping roofs? Cyril House should go and go now.
Posted by nigel pearce on Feb 24th, 2020
This building would be ideal for accommodating many of the clinics from the general hospital and possibly Overdale leaving an opportunity to develop the general on its present site with great savings over relocation.. Its proximity to the general makes any other suggestion a 'no brainer'.
To place a comment please login Login »