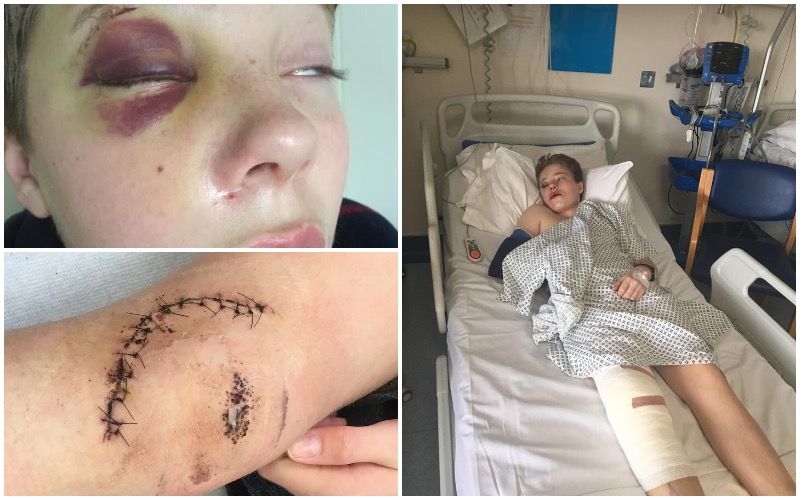 A Jersey family is calling for a law change after a driver who badly injured their son while riding his bike escaped prosecution.

Paul and Jo Dentskewich had been hoping that they would be able to soon move on from the shock of dealing with the physical and emotional scars following their son’s experience in March, when he was hit by a van, while cycling on his bike in St Martin.

But last week they received the news that the driver of the van - who failed to stop after hitting their 14-year-old son Freddie - would not be prosecuted due to a lack of evidence, with the police considering it an unfortunate accident.

The family now want to see a change in the law to close what they see as a loophole - whereby someone will not be prosecuted if they say they didn’t know what they hit.

Mrs Dentskewich said: “We’ve just found out that the driver is not to be charged - due to insufficient evidence to secure a conviction - with failure to stop, assist or report after they left the scene knowing they had hit 'something' and, upon returning to the area over 20 minutes later, was seen peering around the corner rather than making themselves known or offering assistance.

“We are very lucky that Freddie is still with us but it makes you wonder how you can have faith in a system that has no respect for an unconscious and seriously injured victim and allows the perpetrator to leave the scene of a collision having caused serious injury to evade prosecution or sanction?”

On 26 March, Freddie was out on his bicycle and, at about 14:15, he tried to cross La Grand Route de Faldouet, from Rue de la Genestière over to La Longue Rue.

He had stopped at the yellow line and was inching out to see around the wall on his right when he was hit by a van that was driving on the main road towards Ransoms.

He can remember little of the accident but his last memory is of a van filling up his vision. The driver did not stop, but returned later. The van’s windscreen had been cracked by Freddie’s head and its wing mirror on the passenger side had been ripped off by the 14-year-old being bounced off the side.

Three witnesses rushed to help Freddie, where they found him unconscious in a pool of blood. One of them, an army nurse who had served in Afghanistan, put Freddie in the recovery position and called an ambulance. 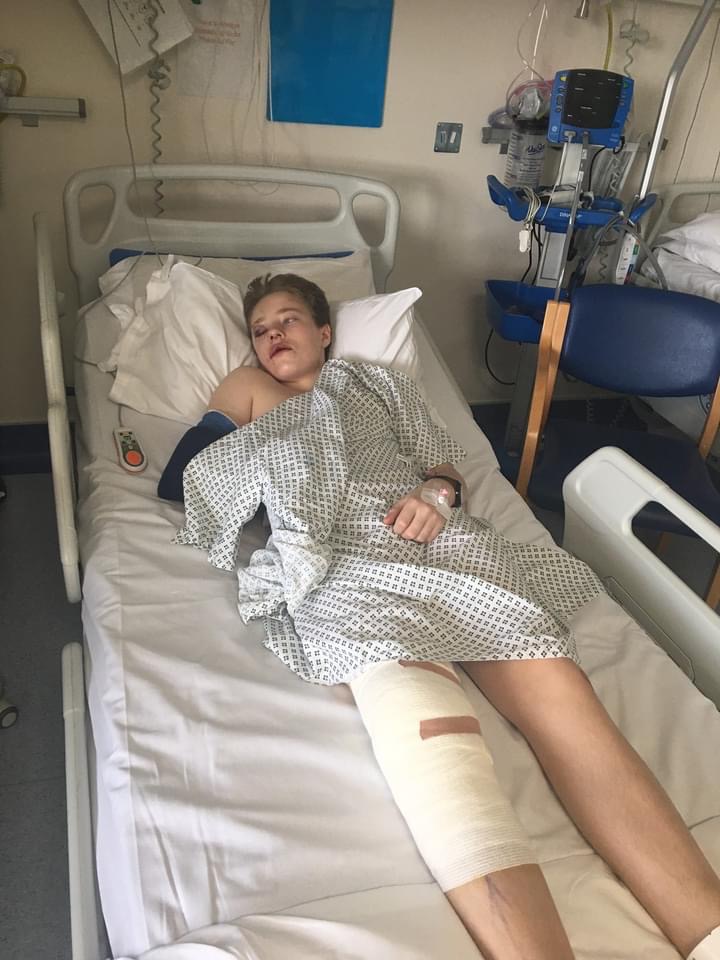 Pictured: Freddie in his hospital bed.

Paramedics treated Freddie at the roadside. After the ambulance, but before the police arrived, witnesses reported seeing a van pull up in La Longue Rue opposite and a lady get out to peer around the corner to see what was going on.

Freddie was driven to A&E by a policewoman as both paramedics were in the back attending to him.

In hospital, Freddie had an operation to attach a large flap of skin that had been cut off by a headlight and another to stitch his eye.

He also fractured his right arm in two places and lost his two front teeth. At the moment these have been replaced by temporary dentures but Freddie will have dental implants when he is 18.

Continuing the story, Mrs Dentskevich said: “By Easter, Freddie seemed to be recovering well but in online lessons during lockdown, he began to quickly tire.

“Although he wasn’t initially diagnosed with concussion, a UK specialist later clearly identified it and Freddie was limited to just 30 minutes of screen time and 30 minutes of exercise a day, and ordered to rest otherwise.

“The goal was to be fit enough to return to school by September but it took until December for him to complete a full day.

“Things are looking much more positive now but he still can’t remember anything from that day beyond the van.

“Both Freddie and the driver were interviewed under caution, but we were told in August that the prosecution had concluded that no crime had been committed.

“The victim has a right to ask for a review, which we did and this was completed by the Law Officers’ Department last week, when we were again told that there was insufficient evidence to secure a realistic chance of a successful prosecution.

“We are having difficulty in coming to terms with this decision. How do we explain to our son that the driver who did this to him is not accountable, especially as she knew she hit something but didn’t stop. And she then returned to look from around a nearby corner.

“From our perspective, it doesn’t seem as though the police followed their own National Police Chiefs Council published code of practice in that they didn’t put out an appeal for more witnesses nor did they get formal statements from the witnesses who were there in their initial investigation.

“The Law Officers can only review the evidence before them, but how could they look comprehensively at the case if the evidence was incomplete?

“As a family, we want to move on but if there is any good to come from this, we want to see the law changed so no one else has to go through what we’ve had to. To us, it doesn’t make sense that someone can get away with hitting someone and failing to stop simply because there is no evidence that they intended to do it.

“In other jurisdictions, such as the Netherlands, if a driver hits a cyclist, they are guilty. I don’t think Jersey needs to be that extreme but we need to have some happy medium. The law needs to better protect unconscious victims because it appears to us to favour the driver.”

A police spokesperson said: “After careful consideration, we deem this to be an unfortunate accident and we don’t believe it would be appropriate, necessary, in the spirit of the law, or proportionate to prosecute either party in this case.”

Saying that this is a disgraceful decison without knowing all the facts of what happened is simply misleading and unhelpful. Was the young man wearing a fluorescent jacket? Was his viewed obscured before he rode out onto what is a busy main road? Did he look in both directions before he moved. Was the van driver distracted? The list of possibilities is endless.

Car drivers are constantly having to drive with a view that a cyclist might shoot out of a side road without stopping at a yellow line and without looking. How on earth can you blame the driver if that happens? Cyclists have as much responsibility to make sure they are not involved in a collision with another vehicle. For which they should be insured.

Drivers do not go out of their way to run down cyclists, they are simply another uninsured hazard on our roads who pay no road tax to use the highways.

I wish the young man a full and speedy recovery.
Posted by John Smith on Jan 12th, 2021
Outrageous. Name and shame the driver.
Posted by Martin Buxton on Jan 12th, 2021
Addressed to private individual posted Jan 12th, are you for real questioning the ins and outs of this case !!!!. Irrespective of whether or not high viz was worn or who was at fault the poor child's head cracked the windscreen and she drove off., there is no way possible she was distracted to the extent she missed that. Then to come back and have a look shows she knew exactly what happened. This is a disgusting individual who deserves to be behind bars for her callous actions.
The blame is not for the accident as the cyclist could easily have been the one at fault, the blame lies with not stopping as any responsible person would. The States of Jersey Police decision is also a disgrace.
Posted by J G on Jan 13th, 2021
Vans right of way. She did not try to evade responsibility, she returned. Accidents happen, hope he recovers. Would not be a sob story attempt If it was an adult so why treat a kid differently. So much we don’t know about the facts here so stop pretending.
Posted by Alistair Watts3 on Jan 13th, 2021
Here we go any opportunity to have a pop at cyclist's, it is not law for cyclist's to wear a yellow jacket it is to stop and report an accident and give assistance.
Posted by Andy Buchanan on May 25th, 2021
Many people have had life altering effects after head injuries in collisions. How did the driver get away with it or not penalised for coming back so late. This is a joke. You can't hit and run every one knows that don't have to be lawyer to work that out. My oh my !
To place a comment please login Login »