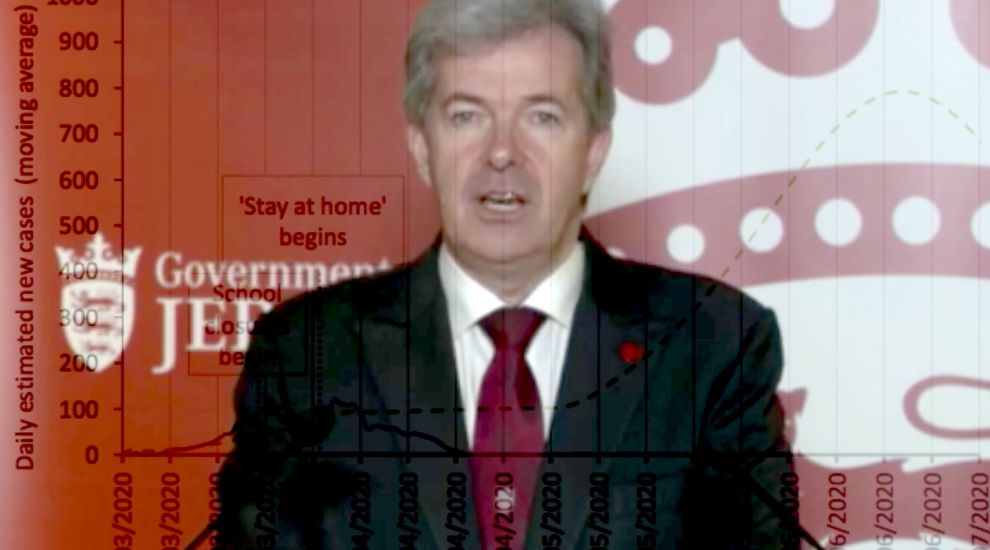 Calls are intensifying for a plan to get Jersey back in business after new data showed the island's covid-19 infection curve appearing to be flattened.

A graph released by Statistics Jersey on Friday showed a significant drop in the number of daily new virus cases after the ‘stay at home’ restrictions began. 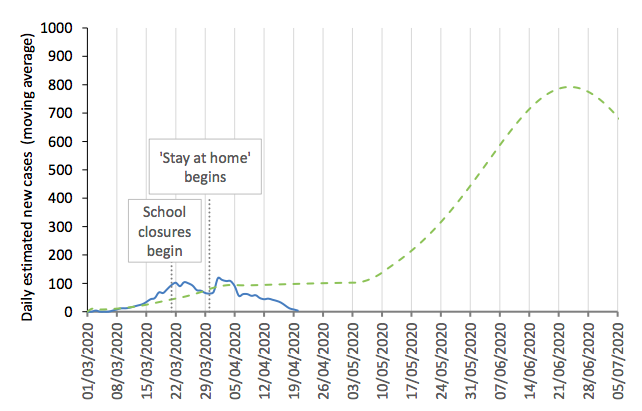 When Express asked for the rationale behind the decision, Health Minister Deputy Richard Renouf said: “It has been necessary to extend it because islanders have been doing well, but we still need to keep those restrictions on to delay the spread of the virus and contain the cases that we have and to shield the vulnerable in our community.”

With the peak of cases estimated to hit in May, the Chief Minister later explained that the government was concerned that releasing from lockdown too early would “undo all the good work that has been happening”.

However, he pledged that an ‘exit strategy’ was on its way and due to be published by the end of the month.

Video: The Chief Minister pledged that an exit strategy would be shared by the end of the month during a press conference last week.

While he wouldn’t be drawn on any details “at this stage”, he suggested that it would involve a phased approach and that the early part of the release plan could see children go back to school in smaller groups, rather than everyone returning “back on day one”.

The comments created some disquiet in the business community, with some questioning why Guernsey had been able to release its exit plan so much earlier.

Local business guru Kevin Keen said on Twitter: "Starting to lose confidence in management of this crisis & I don’t say that lightly. First model far too pessimistic, & now not sure about latest version. A sensibly phased exit plan cannot come soon enough for so many reasons."

Amid such comments on social media, Senator Sam Mézec took to Twitter to argue that the view of health experts should be prioritised over business considerations.

Owner of aMaizin! Adventure Park Kristina Le Feuvre replied saying that her focus was on being able to “plan ahead”.

Me, myself and I, would just like to see a timeline that @GovJersey is working too so we can just plan ahead.

There’s a lot of frustration because the numbers don’t add up.

That view was echoed by owner of Cooper & Co David Warr, who wrote in Express today about the problems of food and beverage outlets potentially reopening under a social distancing scenario.

“Therein lies our dilemma. How do we viably trade in a café where under social distancing rules we need to remove half the seating?... The reality is that it is less costly for us to remain closed than to trade with half-empty cafes. That will be the case for all food service outlets, hotels, airlines etc.”

He later added: “If we open and are only able to operate at half-capacity, we will inevitably need to shed staff - the very staff our government rightly wants us to keep employed. That means financial assistance from government cannot realistically stop at simply co-funding payroll through this transition period.”

Meanwhile, Dominic Jones of JP Restaurants mused that, while he was happy to see more businesses eligible for phase two of the co-funded payroll scheme launched last week, the scheme was “still not optimally designed for economic recovery and now overly complex, inequitable and anti-competitive”.

While Jersey struggles to keep its economy alive post-covid, on a national level, some businesses have already buckled.

Flybe was a notable loss for the islands. The Chief Minister warned on Friday that the health crisis’s impact on other airlines could also spell trouble for the island’s links with the mainland.

Currently, islanders can only travel via Blue Islands to the mainland with government permission for reasons such as essential work, medical treatment or other compassionate reasons. Routine work or leisure travel remains prohibited.

It was further hinted that unlocking the borders would be the final step in the lockdown exit plan – in common with Guernsey – but that this might not happen until as late as 2021.

Pictured: Off-island travel may not start until 2021.

As much as the health of the airlines, Senator Le Fondré said that when Jersey relaunches its air and sea routes will largely depend on the UK government’s wishes, as the island is part of the Common Travel Area.

However, Deputy Renouf expressed concerns on health grounds, describing opening up the flow of travel in and out of the island as “our greatest risk”.

Posted by John Henwood on Apr 27th, 2020
"it's the economy, stupid". Well, yes it is and without a vibrant economy we will not be in any shape to face the next crisis, and be assured, there will be a next crisis. Meanwhile, there's a need to rebuild the depleted Strategic Reserve. That said, it's not an entirely simple issue and Senator Mézec shows his inexperience by making it an issue between business and the wellbeing of the community. Both are inextricably linked. Without business we have no economy and can afford nothing. The whole purpose of the lockdown was to moderate the infection curve and so give our health service the ability to cope with a sharply increasing number of Covid-19 cases. And, give credit where it's due, it seems to have worked. The curve has been lower than forecast and is declining more quickly. But, and it's an important but, if lifting the precautions happens too soon we may face a sharp uplift in the infections curve and have to lockdown again. The last thing we need is a start - stop - start - stop exit from restrictions. I can't offer a solution because I don't have access to the data or the predictions, but I do think the government can't afford to dither. It would be helpful to see a plan (and I don't care what Guernsey is doing) that plots an optimistic, realistic and pessimistic route from where we are now. And the sooner the better.
Posted by Michael Le Masurier on Apr 27th, 2020
Not to sure how we can believe the numbers. My wife had a phone consultation with her GP and she was told she most likely had the virus. No offer of testing was made and when I called the Helpdesk all I got was told about self isolating and again no mention of testing. I am aware of 2 others with similar experience, so therefore the incidence number are not true.
Posted by PaulBurton51 on Apr 28th, 2020
On the basis UK flights will start, at least to Europe, in the next few months then Jersey needs to have off island flights. One reason being that I like many have booked trips and holiday packages months ago and if the UK allows flights to certain countries then our insurance will NOT cover us as flights and holidays will be going so we have to go on vacation or on weekend trips which I have plenty of booked from July onwards. Insurance refunds are based on UK travel advice only. I checked my policy. So unless Jersey gov is willing to refund us for all these lots trips, locking down off island trips will not happen.

I am going to see my fiancee in Germany. Not seen her since February and the gov can not stop me from our weekend get togethers. And this relates to all those with relatives around Europe.
In addition there may never be a vaccine so the government need to consider that too.
To place a comment please login Login »