Cast of The Durrells revealed 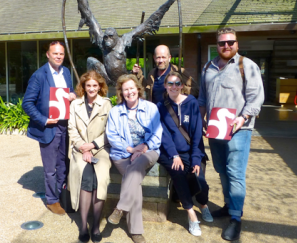 Cast of The Durrells revealed

The English star of Line of Duty and Ashes to Ashes - who is a life-long fan of Gerald Durrell’s books - is leading the cast as Louisa Durrell in the new six part series based on the early life of Jersey’s world famous conservationist.

ITV has commissioned the new series based on Durrell's famous trilogy - memoirs of his time growing up in Corfu.

'My Family and Other Animals’, ‘Birds, Beasts and Relatives’ and ‘The Garden of the Gods’ are all being brought to life by Simon Nye - the man who wrote 'Men Behaving Badly'. It's set in 1935 when the Durrell family left the UK to start a new life on the Greek Island.

Filming is due to start next month in Corfu in the same locations the Durrell family frequented along with their eccentric friends and “other animals”.

Lee Durrell is delighted the work of her late husband is being adapted.

She said: “I am absolutely thrilled that Gerald Durrell and his idyllic childhood in Corfu will appear on our television screens.  Those sunny, magical days, when eccentric family affairs were interwoven with Gerry’s discovery of the natural world, inspired his life’s work to rescue animals from the brink of extinction.  I hope that the new series will be a gentle, but timely reminder of the importance of Gerry’s work today and will inspire others to take up his cause.”

Milo Parker who stars in Mr Holmes and Ghosthunters will play the young Gerry who’s obsessed with animals and the cast also includes Ripper Street and Peaky Blinders' actor Josh O'Connor who's taking on the role of Larry. Daisy Waterstone who has been in Silent Witness and Testament of Youth will play Margo and newcomer Callum Woodhouse is taking on the role of Leslie.

Leslie Caron, who starred in the 50's musicals 'An American in Paris' and 'Gigi' will play the Countess who befriends Margo. Some well-known Greek actors have been cast as the Durrell family’s Greek friends – Spiro, Theo and Kosti.

The Durrells will hit our screens next year.