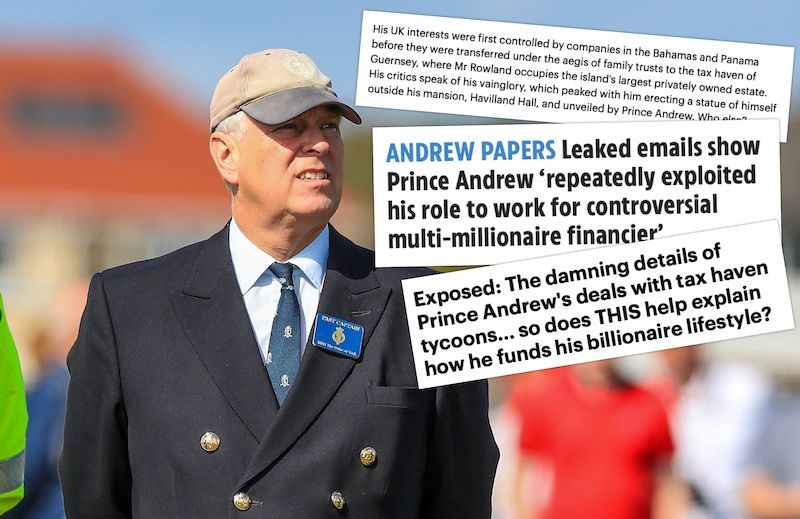 Scandal-hit Prince Andrew is facing fresh scrutiny over his dealings with a Channel Islands businessman.

The Mail on Sunday released yesterday what were dubbed the ‘Andrew Papers’, documenting a reported close relationship with Guernsey resident David Rowland.

The son of a scrap dealer who made his fortune in property, Mr Rowland owns Havilland Hall in the island and is reported to have a net worth of £612m, according to the Sunday Times Rich List.

It has previously been reported that Prince Andrew (59) has attended functions at Havilland Hall, including in 2005 when he is believed to have unveiled a statue in the grounds of the property.

Later picked up by the Sun, Mirror, Telegraph and Guardian among other media, the Mail’s recent article focused on a set of leaked emails purporting to show how Prince Andrew – at the time a British trade envoy - promoted a private Luxembourg-based bank owned by the Rowlands, while on official trade visits.

It also places the Prince under further scrutiny following a damning BBC interview in which he defended his friendship with convicted paedophile Jeffrey Epstein and denied allegations he had slept with Virginia Giuffre – née Roberts – who claims she had been trafficked to him when she was 17.

Prince Andrew is stepping back from royal duties for the “foreseeable future” following criticism over his relationship with convicted sex offender Jeffrey Epstein.

Last week, Prince Andrew told @maitlis he "let the side down" by staying with Jeffrey Epstein#Newsnight pic.twitter.com/7nKdoJB66f

During the interview, he referred to his position as trade envoy many times, suggesting that Mr Epstein’s home was a convenient location to stay while away on business in the US.

Days later, it was announced that Prince Andrew would be stepping back from public duty.

Responding to the latest reports, Buckingham Palace maintained in a statement that the Duke of York’s aim while trade envoy was “to promote Britain and British interests overseas, not the interests of individuals”.

The Rowlands said they could not comment on the reports for legal reasons, according to the Mail on Sunday.

As concerns mount up about the Duke, a number of organisations also said that they would be reviewing their patronages, including prestigious golf club Royal Portrush.

Two weeks ago, Express contacted the Royal Jersey Golf Club – of which the prince is also a patron – but is still yet to receive a reply.

Pictured top: Prince Andrew and some of the headlines in national publications over the weekend. (PA)