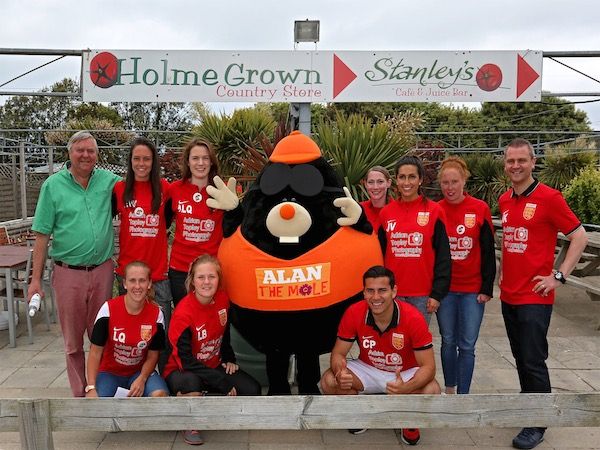 A local charity is making sure everyone factors in staying safe in the sun when they are out watching the action at the NatWest Island Games.

The Donna Annand Melanoma Charity is giving out free suncream to all spectators at all the outdoor venues and they’ve got a giant mole to help spread the word on sun safety.

Their new mascot ‘Alan the Mole’ will be out and about throughout the Games when they kick off a week on Saturday and there will be a team handing out advice about protecting your skin in the medical tent in the Island Games Village in Howard Davis Park.

The charity’s Kerry Petula said: “The NatWest Island Games is going to be a most spectacular event in Jersey and in these summer months we really want to make sure everyone involved is sun aware and protects themselves best they can.

“People in Jersey don’t realise how strong our sun is, so it’s likely our visitors won’t either and so it’s important we are on hand.”

The team are making sure all the Games Makers are kitted out with UV bands and will have more on offer during the week.

Kerry said: “The UV bands are white until the UV activates them and they turn purple. We thought it important all Games Makers had one so that they could tell people when the UV was high and to apply sun cream. Even on a cloudy day the bands will change colour.”

Alan the Mole has already made his first public appearance at Holme Grown where he was helping the Jersey Women's Football Team to bag pack, helping to raise money to cover the cost of their away game against Everton FC this weekend. The team are keen supporters of the charity and Alan will be flying the flag for Jersey at all their matches during the Games.

The charity was set up four years ago to educate people of the dangers of malignant melanoma following the death of Jersey woman Donna Annand who died from the disease aged 29.

Malignant Melanoma is a form of skin cancer, which affects the pigment producing cells (Malanocytes) and often appears as a new or changing mole.

Changes in character, size, shape and colour are all signs of the disease that is one of the most common forms of cancer in young adults aged between 25 and 29.

Click here to visit our charity section for more information on The Donna Annand Melanoma Charity, and other local charities.