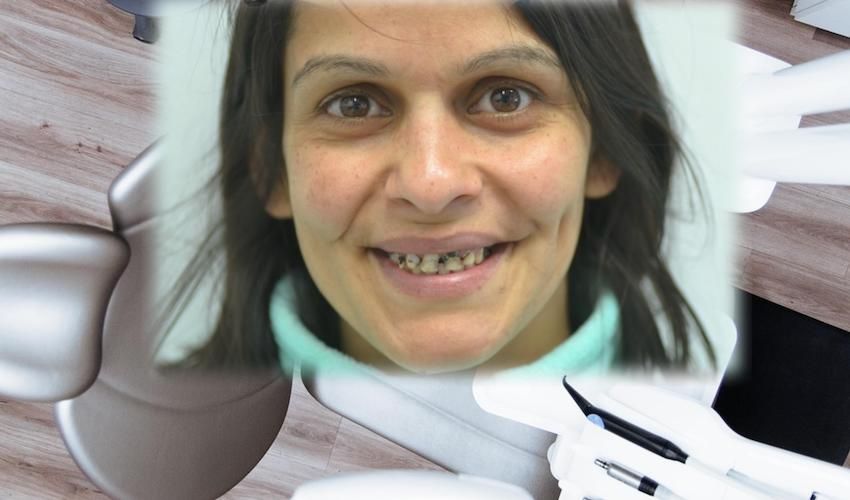 A Romanian woman, who was orphaned as a toddler, has had her smile restored in Jersey thanks to a “life changing” collaboration between a local charity and a dentist.

Iolanda – known as Ioli – travelled to the island over the weekend to have the last stage of her transformative dental reconstruction so that she can smile again after enduring a lifetime of hunger, personal tragedy and a serious car accident.

The surgery is due to the joint efforts of local charity Mustard Seed Jersey – which aims to ease suffering in eastern Europe – and Jersey Dental Care who were determined to help Ioli whose teeth were causing her not only severe pain, but low self-confidence.

Well-known for their annual ‘Shoebox Appeal’ which is currently underway, Mustard Seed Jersey also runs a variety of other projects focusing mainly on countries like Romania, Ukraine and Moldova.

Pictured: Drag the slider across to reveal what Ioli looks like after her surgery.

From Oradea, Ioli was orphaned aged just three years old and until she was 19 she lived in an orphanage.

Before she was found and taken into the care of a foundation for orphans, Ioli was living hand to mouth on the streets of the city for almost a decade.

Now hesitant to talk about her past, Ioli has survived many ordeals including poor nutrition, personal tragedy and a serious car accident when someone simply drove straight into her.

It was after she was taken in by the ‘Romanian Orphans’ Ministries’ that Rose Helie from Mustard Seed came across Ioli.

Explaining how Ioli’s dental treatment in Jersey came about, Rose said: “At the end of 2018 we wrote to a group of charities we support in ‘Oradea’ in Romania offering support for people with medical needs.

“Ioli was made known to us as an orphaned young lady whose life path has been particularly difficult and whose teeth were in an atrocious state – causing her not only pain and suffering but also denying her of any self-confidence.”

It was speaking to her own dentist, Derik Mare at Jersey Dental Care which sparked the collaboration.

“Hearing about it Derik immediately offered to undertake whatever restorative treatment Ioli needed, free of charge. I was astounded by his generous offer, so we started to put the wheels in motion.”

Ioli’s treatment has been split up over three separate appointments – two in March and the final one over the weekend. The charity funded Ioli’s first two flights over to the island and then the dentist – along with Schalk Both Dental Ceramics - has covered the costs of the treatment and the woman’s last trip to Jersey.

Speaking about the project from his point of view, Derik said: “When Rose explained her situation, it was simple - we needed to help this young lady. We have come to know Ioli and the support social worker and translator Geta, who travels with her, so well."

“We are delighted to be able to give back her confidence - to smile, to communicate and be more confident and to make her own way in life. We have also learnt a lot from her - which is a reminder to us all of just how privileged we all are.”

Elaborating on the impact of the treatment on Ioli’s life, Rose said: “What Derik and the team have done for Ioli cannot be underestimated. It really has changed Ioli’s life and she has surpassed all our expectations…. Ioli has also broadened her horizons by travelling to the airport, getting on a plane, seeing somewhere new and meeting new people - things we all take for granted; as well as being able to hold her head up high and smile.

“Orphans grow up, and it’s all too easy to forget that hardship as a child can be no less lonely, frightening and uncertain as young person and as an adult. They are people just like us and need - and deserve - to be given the chance to have their own lives, jobs, sense of value, self-esteem and love; and maybe one day to even have a family of their own. Through her transformation, Ioli now has those chances.”

Following the success of this project, Mustard Seed are keeping the appeal for dental care funds open, in case opportunities arise for the treatment of other people in similar situations to Ioli.