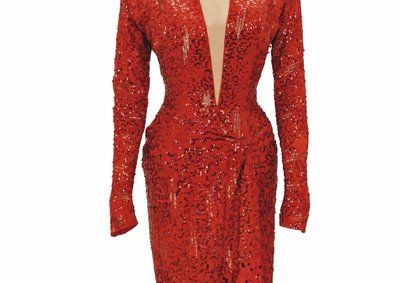 Items previously belonging to some of the most famous people in the world, amassed by a Jersey collector, are to go on show at Christie’s in London.

Highlights from the collection of David Gainsborough Roberts will be open to the public until 2 September.

The exhibition will feature Marilyn Monroe’s dress from the film Gentlemen Prefer Blondes, Lawrence of Arabia’s silk robe and headdress, and a slice of Queen Victoria’s wedding cake.

The exhibition ‘Famous and Infamous: Highlights from the Collection of David Gainsborough Roberts’ spans over 150 years of celebrity memorabilia, with each piece telling the story of the cultural icon it once belonged to.

David Gainsborough Roberts began collecting at the age of seven when his grandmother gave him a piece of wood that came from Nelson’s flagship, The HMS Victory. He became serious about collecting when he paid £16,000 for the Marilyn dress at Christie’s after seeing it modeled by a friend.

He said: “In 1989 I bought a Marilyn Monroe film costume from Christie’s and my life changed completely. Although I have always been a collector of antiques since before I could read or write, that day in 1989 brought out the serious collector in me.”

Other items in the exhibition include a pair of onyx ‘eye design’ cufflinks, presented to John Lennon to commemorate The Beatles’ first live appearance on The Ed Sullivan Show in 1964, and a card case given to Oscar Wilde by Lord Alfred Douglas, which Mr Gainsborough Roberts nearly lost to Stephen Fry.

As well as items previously belonging to celebrities, the exhibition also features objects once in the possession of criminals such as Bonnie and Clyde, Al Capone and a Dr Crippen.

Mr Gainsborough Roberts said: “I’ve always been interested in crime, I’ve got lots of things that belonged to Al Capone and Bonnie and Clyde – they were notorious. I have things of Dr Crippen – in 1910 he killed his wife, chopped her up and put her in the cellar.”

The exhibition will take place at Christie’s, South Kensington. Entry is free.

Mr Gainsborough Roberts added: “Although I have put on dozens of exhibitions worldwide, this is my first one with Christie’s. I hope all you fellow collectors enjoy this small selection of highlights from my collection.”