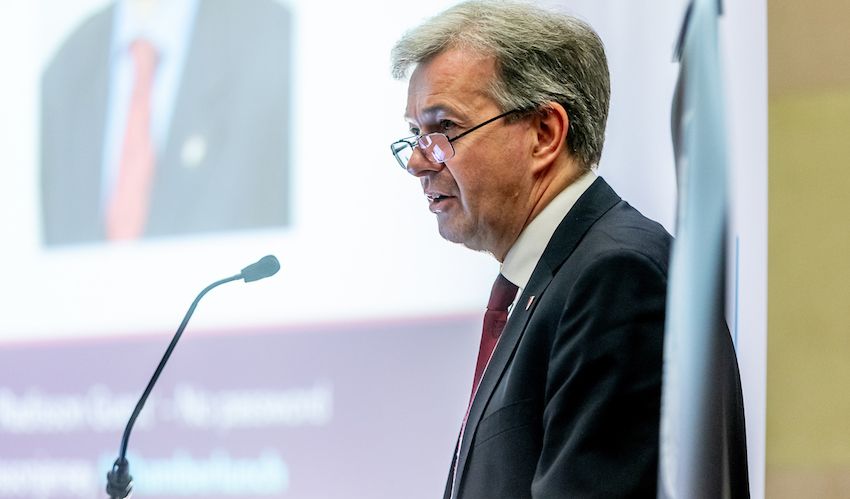 The Chief Minister has hit back at perceptions that his government have failed to take action on major issues facing the island, instead promising decisions on the location of the new hospital and immigration policy in 2020.

Addressing almost 250 representatives of Jersey’s business community at the first Chamber of Commerce lunch event this year, Senator John Le Fondré strove to put criticisms of his Council of Ministers to bed, promising “a year of action”.

In the speech he prepared for the event, the Chief Minister promised to deliver several major projects in 2020.

Pictured: The Chief Minister addressed a packed Chamber lunch at the first event of 2020.

The location of the new hospital

Speaking to the packed audience of business representatives, Senator Le Fondré said that “in 2020, I’m absolutely committed to concluding the debate on the new hospital location and construction."

Later on, during the Q&A portion of the event, the Chief Minister emphasised that it was just under a year ago that the Environment Minister decided to reject the planning application for redeveloping the hospital on its current Gloucester Street site.

One audience member asked: “There are probably 300 people in the audience, how many people does the Chief Minister think will still be alive when the new hospital is completed?”

Pictured: The costly and long-delayed question of where to put the hospital will be resolved this year, the Chief Minister has promised.

Responding to the tongue-in-cheek question, Senator Le Fondré emphasised that politicians’ rescindment of the decision to build the new hospital on the current site was not that long ago and that the project is now “in a much better place".

He explained that he has been speaking with possible contractors, with the intention of announcing the partner on the build and design of the new health estate in summer. He added that the government is “still on track” for the original timeline of having the new hospital completed by 2029-2030.

Bringing his response to a close, Senator Le Fondré tried to distance himself from the lack of decision-making on this major project in the past, saying: “We are trying not to dwell on the past about who said what and when and wherever, we are trying to achieve delivery."

Also among the Chief Minister’s promises of “action” was a promise of "an effective migration policy" agreed by the end of 2020.

Little has moved forward publicly on this issue since the Migration Policy Development Board published their interim report, which included several hypothetical policies, including work permits and health charges to curb population. 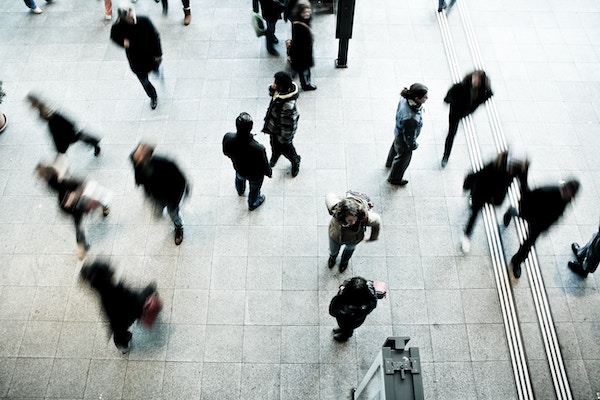 Pictured: The Chief Minister promised a policy debate on the population issue over the summer.

However, the Chief Minister has now assured the public that there will be a policy debate on “proposed migration controls” in the summer.

Elaborating on this issue during his speech, Senator Le Fondré continued: “I don’t deny that this will be the most difficult policy decision faced by an Island government in recent years and will likely be controversial. But, for the sake of our economy and long-term sustainability, it is critical that we get it right.”

Prompted by an audience member’s question on the cost of food in Jersey, Chamber CEO Murray Norton, who was also chairing the event, asked the Chief Minister for his views on GST-limits for imported goods.

“In terms of the de minimis issue [it] is, in my view, an unfair barrier for local businesses, because essentially its already a cost that you will incur and… an individual buying… from the UK isn’t.”

Senator Le Fondré explained that, in the Government Plan, the threshold for charging GST on imported goods was lowered from items costing £240 down to £135.

“It’s not enough, in my view, but it is that first step bearing in mind that the Treasury Minister first tried it I think in 2018… but it didn’t get the support that it, in my view, needed.”

The Chief Minister also took the opportunity to note what he has accomplished whilst at the helm of the Government, including settling pay disputes with public sector workers – placing the States Employment Board “on the front foot” to negotiate next year’s pay – his Office Modernisation Strategy, and securing the new Damages Law.

On this last subject, the Senator said the new legislation will be key in “reducing our risk to exposure to such lawsuits, while continuing to safeguard the needs of people who have suffered injury.

“In the first six months of operation, we have seen one claim reduce from approximately £19million to £8million, and another from £49million to £15million. That is about £45million in total, so far.”

During the Q&A, the Chief Minister was also probed about a range of issues from housing, the cost of living in Jersey and staff shortages.