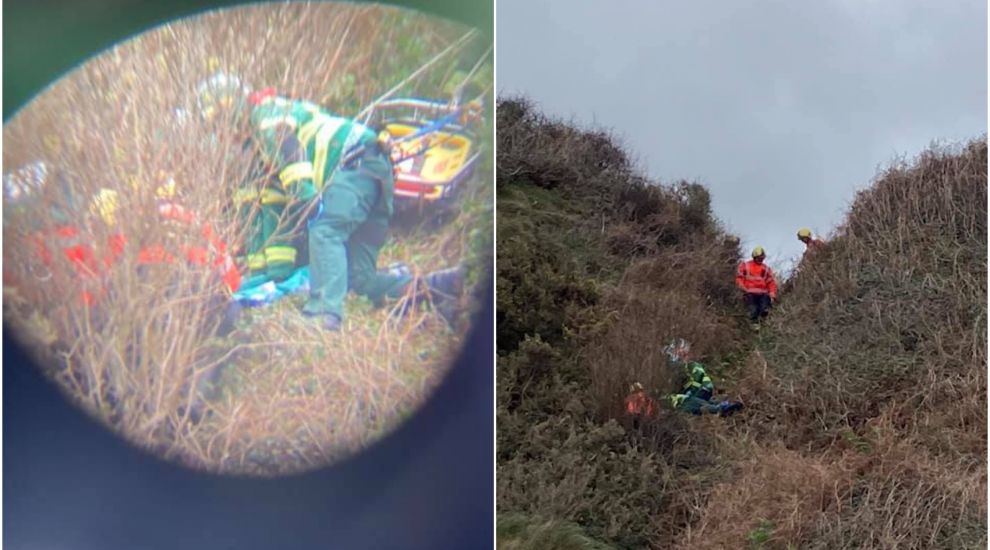 The Emergency Services have been praised for rescuing a cyclist who fell down a coastal embankment yesterday, leaving her one metre from a "shear drop" of 20m onto the rocks below.

Jersey's Fire and Rescue Service received a request from Ambulance Service to assist a fallen cyclist at Greve De Lecq around 11:30 on Monday (5 April).

The cyclist had fallen from her bicycle and down an embankment of approximately 20 feet, but was stopped by the vegetation from falling any further.

A crew from the Western Fire station and a specialist Rescue Unit were sent to the area along with a Fire Duty Officer, to meet the senior paramedic on the scene.

Using Height Rescue Equipment, the crew from both the Fire and Ambulance Services were then able to secure the injured cyclist, and transport her safely to the ambulance.

Though the cyclist's injuries are not expected to be serious, officers said there was "no doubt" it was down to the fact she was wearing a helmet that there were no serious head injuries.

Station Commander Ryan Hall said: “It was absolutely the right tactical decision working closely with ambulance paramedics using our safety systems. The safety of the casualty and our crews meant that we could work to the best and safest outcome.

"The terrain was difficult and within 1 meter a shear drop from the edge to a further 20 meter drop to the rocks on the beach below. Thankfully the casualty was wearing a cycle helmet that prevented any serious injuries to her head.”

News of the rescue was shared on Facebook, with scores of islanders praising the Emergency Services for their efforts.

"Fantastic work as always by our combined services. So glad she escaped without major injuries, hope she has a speedy recover," one islander wrote.

Another said: "Safety gear worn by the rider, excellent preparation and saved her from greater injury, great work as ever by the combined efforts of our emergency services."