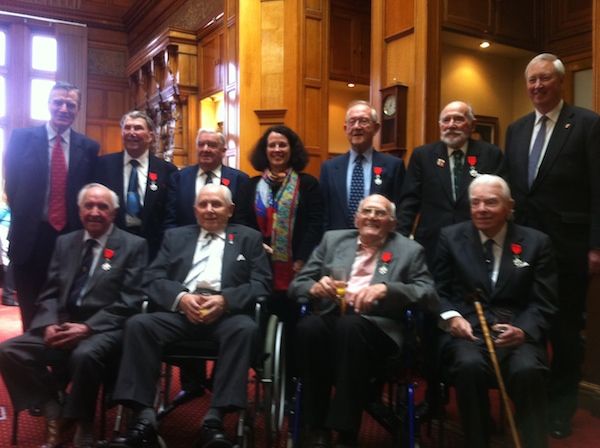 Six Jersey men, now all in their late nineties, who took part in D-Day on June 6th 1944 have been given France's highest military award - the Legion d'Honneur.

The men were presented with the medal by the French ambassador Her Excellency Sylvie Bermann at a simple ceremony in the States building. In her speech she praised the men for their bravery and said that it's thanks to their actions that we enjoy our freedom today.

Historians view D-Day as one of the turning points in World War II, and Britain's wartime leader Winston Churchill described it as the "beginning of the end" for Hitler. It was the largest seaborne invasion in history and involved nearly 5,000 landing and assault craft, 289 escort vessels, and 277 minesweepers. It's estimated nearly 160,000 troops were involved and that there were more than 4,000 allied deaths on the first day.

Just over a decade ago soldiers, sailors and airmen living in Jersey who were involved in the battle formed the Jersey Normandy Veterans' Association and regularly organised return trips to the beaches. Over the years the group has steadily dwindled to just eight. One of them, Clive Kemp, had already been awarded the Legion d'Honneur, but recently the French president announced all D-Day veterans should be given the award, so Clive has now been joined by fellow island residents Fred Evans, Harry Fenn, Dennis Knee, Dennis Palmer, Bill Reynolds, Peter Utley, and Arthur Wright.

Afterwards veteran Harry Fenn said, "...I feel honoured by the award, but I don't think of myself as a hero. The real heroes are those who never came back."