Date with destiny for Danny in Leeds 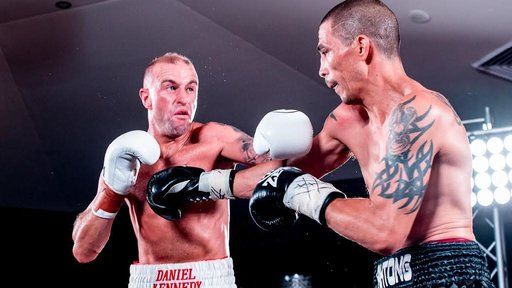 Date with destiny for Danny in Leeds

He jokes about it, while also being deadly serious; as boxer Danny Kennedy will leave no stone unturned as he pursues his ambitions – both in and out of the ring.

That’s because the Jersey pro also works as a stonemason in the Island, but he still wants to go as far as he can in the toughest sport of them all. “I always tell people I will leave no stone unturned in my day job as a stonemason and my other job as a boxer!” said the 33-year-old.

“I’m going to give it my best shot and see where it takes me. I love the sport and I’m unbeaten and raring to go in Leeds on November 18th.”

Kennedy, a former Le Rocquier School pupil, is a 3-0 fighter as a pro and had 62 bouts in the amateurs.

“I fought in the Amateur Boxing Association finals in 2009 and reached the quarter-finals, where I lost to the eventual winner.

“After that I sort of drifted out of the sport for a while, went travelling and working in Australia, and then got back into boxing when I went to one of their all-time greats, Anthony Mundine’s gym.”

Kennedy fought three times Down Under, winning all three and in his last bout he was crowned New South Wales’ welterweight champion in November last year.

“I am now concentrating on fights back in the UK and I want to get to the stage next summer where I will be 6-0 or even 7-0 and fighting for an English title. Hopefully that fight will be in Jersey. I know I can do it and I’ve got an amazing back-up team behind me, including my coach Tom Lambert, who is flying all the way over from Australia for November 18th.”

As well as a strength and conditioning coach and dietican, he also has his girlfriend to thank for organising his schedule.

“I couldn’t have done any of this without Jade and my sponsors, who have been so good to me. We are taking 50 people from Jersey to Leeds for the fight and I will be doing it for them. I will win, no doubt about it.

“I may be 33, which is relatively late to be starting a boxing career in the pros, but I’ve not been in any real wars as a fighter because my style is very technical, very quick and sharp and as such I feel as fresh now as I have ever done. I feel I have got the experience and the talent to go a long way. How far only time will tell?

Kennedy has been training at a number of gyms in the build-up to his UK pro debut next weekend.

"I've been over to John Murray's gym and Scott Welch's in Brighton and had a great time at both of them. The sparring was excellent and now I just can't wait to get cracking. November 18th can't come soon enough for me."