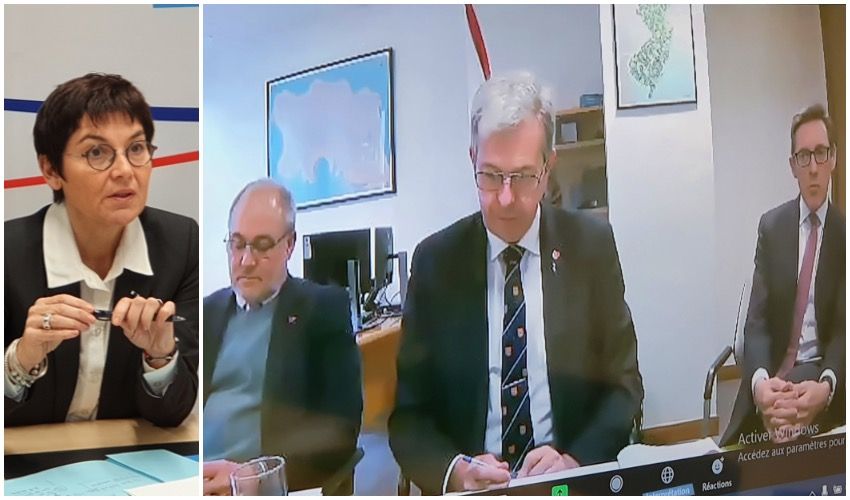 The French have once again threatened legal action over fishing licences, after the country’s Fisheries Minister met with the Chief Minister yesterday.

Senator John Le Fondré and External Relations Minister Ian Gorst held a virtual meeting with Annick Girardin yesterday to run through the methodology by which Jersey had issued licences to 130 French boats.

This is something the Chief Minister had promised to do at a previous meeting last month.

However, it does not appear that the exercise bore fruit, with France’s Minister for Europe, Clement Beaune, afterwards telling reporters at a press conference in Brussels that if dialogue didn’t work with the UK on post Brexit licences, legal action may be necessary.

Pictured: "This morning, a conversation with the Government of Jersey over the outstanding applications for fishing licences. The French government is working to achieve a favourable outcome for the French fishermen, some of whom have been waiting for over a year to be able to do their job," Mme Girardin tweeted.

Senator Gorst tweeted after the meeting: “Pleased to join a call with France’s Minister for the Sea this morning. We continue to follow an evidence-based process, in line with the [trade agreement].

“Where boats can show the required historic record, a fishing licence will be issued. We currently don’t have data to issue more licences.”

Although he was not in yesterday’s meeting, Environment Minister John Young, who has responsibility for issuing licences, said that his French-speaking Assistant Minister, Gregory Guida, had attended and no new evidence of past fishing activity had been presented.

“We have issued 130 licences and we gave until the end of this month for the 30 or so boats with temporary licences to provide the evidence as required by the UK-EU trade agreement,” he said.

“My officers have made a massive effort to licence all the boats they can but they have exhausted all evidence available to them so it looks likely that those boats on the ‘orange list’ will not be allowed to fish around Jersey from Tuesday.

“Our methods of assessing the data have been an open book and have been fully endorsed by the UK, and their Fisheries Minister, Victoria Prentis, said she was very supportive of Jersey at the meeting yesterday.

“The French seem willing to evoke the arbitration methods set out in the trade agreement but that will be a matter for the UK and EU.”

Pleased to join a call with France’s Minister for the Sea this morning. We continue to follow an evidence-based process, in line with the TCA. Where boats can show the required historic record, a fishing licence will be issued. We don’t currently have data to issue more licences.

Deputy Young said he was still keen to move on to the next phase of licensing – attaching conditions to licences already issued – and he was currently taking advice and guidance from the External Relations Minister and his team.

Posted by john garner on Jan 26th, 2022
This is even after Gorst gave them his Paddington Bear long hard stare?
Posted by nigel pearce on Jan 26th, 2022
Put a time limit on the licences already ‘conceded’ and reduce the numbers by a percentage every time they come up for renewal. When a present French licence holder retires, his licence should retire with him.
Posted by Keith Marsh on Jan 26th, 2022
The French are never going to be happy.
The only way is to tell them the facts as they are now, demand payment for each licence so issued, and threaten to withdraw renewals unless France drops all threats against Jersey, including Annick Girardin idiotic comment about cutting off Jersey's electricity supply.
Posted by Peter Richardson on Jan 27th, 2022
I thought we had been told that the previous "Bay of Granville" agreement required French licensed boats to maintain a log book of all fishing in CI waters. If this log book has not been kept then the French boat captain has not been following those procedures so obviously cannot prove he should have a licence now. I think this should always be explained.
To place a comment please login Login »