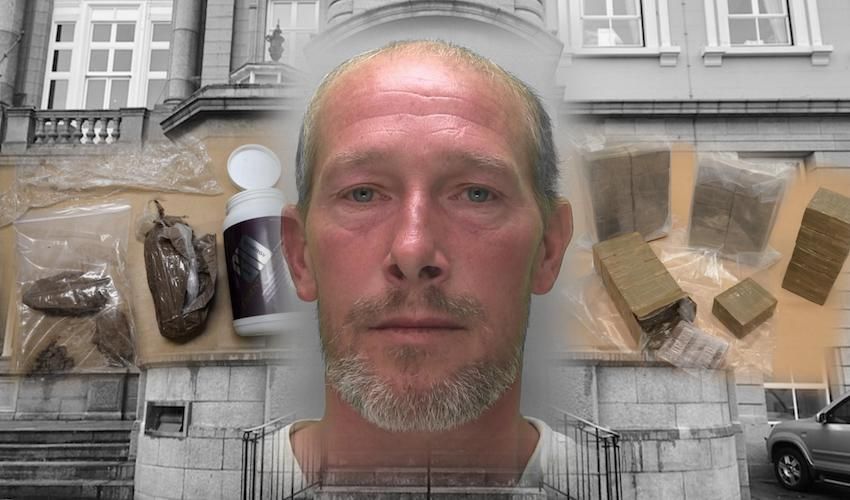 A drugs kingpin has been handed one of Jersey's longest ever jail terms for his role in two gang plots that aimed to "profit from the misery of others" - including one of the biggest heroin imports the island had ever seen, disguised as a protein shake.

Alan James Smitton (46) yesterday appeared in the Royal Court where he was sentenced to a total of 17 years behind bars - a jail term also taking into account his involvement in a six-strong cannabis gang.

It came following the Police's months-long 'Operation Raven' to topple a UK-based Organised Crime Group that viewed Jersey as a "soft target" for drugs smuggling.

The Royal Court heard that there were two arms to the operation: heroin and cannabis, which drew together the drug worlds in Jersey and Merseyside to bring a £500k haul to the island - and that Smitton was across both.

But it was the Class A drug plot involving Smitton and two other men - John Anthony Banach (49) and Simon Reeves (52) - that attracted the most serious sentences.

The Court heard that the supply chain involved a total of 407.31grams of low-quality heroin and Smitton recruited another man, Banach, who in turn recruited Reeves to mind the drugs at his address.

The trio's downfall was triggered in late 2017 following a Police surveillance operation, which monitored the men’s contact with one another in person and via the telephone.

Pictured: Banach (left) and Reeves (right) were also sentenced as part of the heroin conspiracy.

“Officers noticed two brown lumps and some brown residue on a magazine on a coffee table in the living area," he explained.

Later on in the search, Reeves admitted that there was further heroin hidden in a drawer under the bed, but he said, “It’s not mine, I am looking after it for someone.”

At this point, officers located a protein powder tub, which contained a further quantity of heroin in excess of 400g. 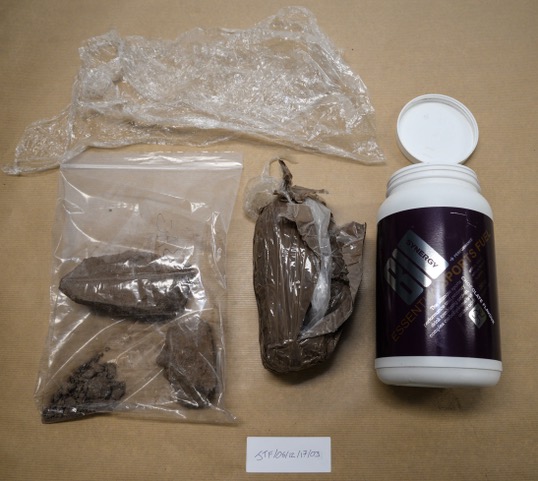 Pictured: Most of the heroin seized was stashed in a protein powder tub. (States of Jersey Police)

Describing Smitton as “the local principal of the enterprise”, the Crown Advocate commented: “It appears that [Smitton] recruited Banach and gave Banach the heroin in the protein tub, and delegated to him the tasks of finding a stash location and helping to find buyers.”

The Crown asked the Court to impose a sentence of 20 years’ imprisonment for both drugs plots.

Smitton’s lawyer, Advocate Rebecca Morley-Kirk, argued that the Crown’s conclusions were “too high” and that her client had been “influenced to take part in his role as described because of his substance abuse problems and alcoholism.”

She also offered Smitton’s “remorse” and told the Court that, whilst on remand, he has been participating in an alcohol and drugs course and a French language course.

Although Banach was lower down the chain than Smitton, the Court heard that, based on material on his phone and the fact he had contacts “to facilitate onward supply” of the drug, he was “’heavily involved’ in dealing heroin.” The prosecution invited the Court to impose a sentence of 11-and-a-half-years for Banach’s involvement.

On behalf of Banach, Advocate Michael Haines emphasised his client’s ‘middle-man’ role, saying: “Those who are high up in the drugs world do not take risks… It was Mr Banach who was recruited to take those risks.”

Pictured: The men were taken back into custody after sentencing.

Acknowledging that Reeves had no part in the “actual dealing of the heroin”, the Crown Advocate emphasised that his role as “custodian” was “an important one” and asked for a nine-year sentence for Reeves.

Highlighting the fact her client is a long-term heroin user argued that Reeves’ only agreed to participate in the “passive role” of minder due to the fact he was tempted by “the dangling carrot of free drugs.”

Jurats Averty, Christensen, Ramsden, Thomas and Pitman heard the case and the Bailiff, presiding, handed down the sentences to the trio.

Following the sentencing, Acting Chief Inspector Craig Jackson commented: "Illegal drugs have a devastating impact on society, with the most vulnerable often suffering disproportionately. The men sentenced today have repeatedly sought to profit from the misery of others. They have acted with a sense of impunity and shown little or no remorse for their actions.

“They considered Jersey to be a soft target; nothing could be further from the truth.”

Posted by B De Gruchy on May 24th, 2019
Alcohol has a devastating impact on society, not that I think it should be banned, but you are far more likely to be assaulted by someone who is drunk that someone on most illegal drugs. Many illegal drugs only have an impact due to the very fact they are illegal making them very expensive and controlled and dispensed by criminals.
Legalise and control them and you turn what was a waste of police resources into a source of revenue and tax rather than a means to funding criminals.
To place a comment please login Login »