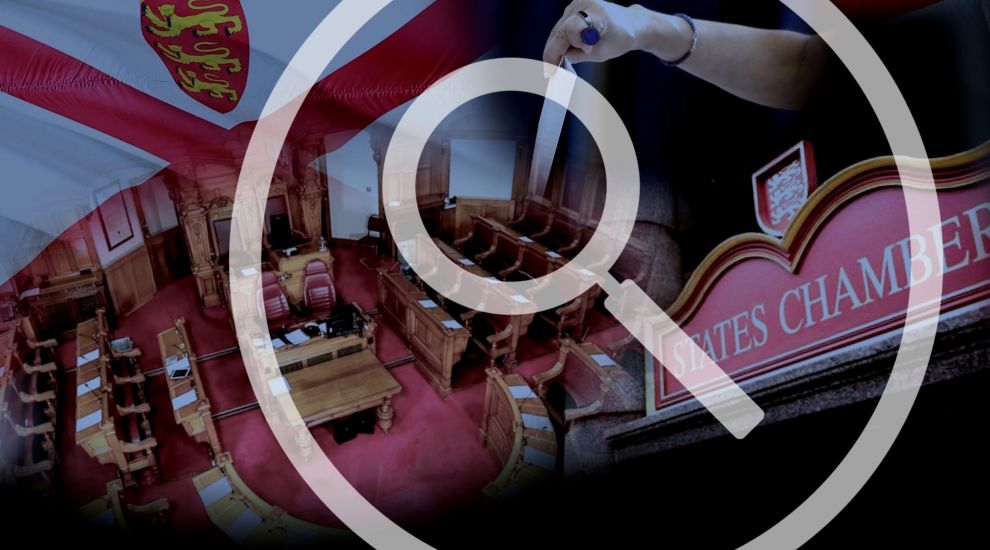 They may have witnessed voters turning up to the wrong polling station and inaccuracies on electoral registers, but independent observers have concluded that Wednesday’s election was well-administered and fair.

Giving its preliminary findings this morning, a ‘mission’ from the Commonwealth Parliamentary Association said: “Following extensive electoral reform, Jersey has delivered a well-administered and more competitive election than in the past.

“The election was found to be delivered in a calm and professional manner, with clear efforts to provide a positive experience for the voters of Jersey.

“However, not unexpectedly, issues arose during this electoral cycle, including the understanding of the newly established Jersey Electoral Authority, the navigation of new constituency boundaries and voter registration.” 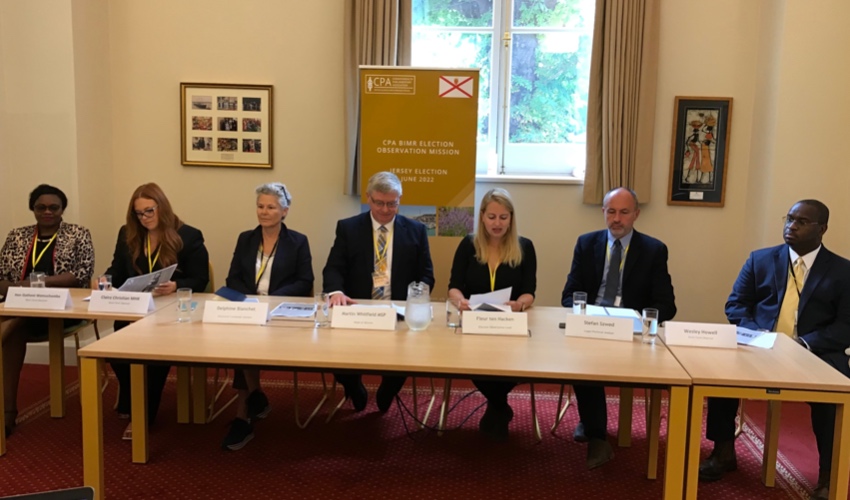 Pictured: Members of the Commonwealth Parliamentary Association announce their preliminary findings on Friday.

It added: “A historic number of women Deputies were elected, despite the absence of special measures to support women candidates [such as quotas or financial support].

“Overall, the legal framework provides a basis for a democratic election.”

The nine-member mission, led by Scottish MSP Martin Whitfield and including observers and election professionals from the Isle of Man, Kenya, Sierra Leone, France, Poland and the Netherlands, said it would produce a full report by the end of August.

Mr Whitfield said this would address many of the issues that had been raised with observers, which have been referenced in today’s initial report.

In many ways, the mission is appraising some the changes that it itself has suggested. One of its recommendations after 2018 was that the Jersey election law “should stipulate that electoral constituencies be of equal or comparable size in order to guarantee one of the fundamental principles of electoral rights, the equality of the vote.”

That was introduced but the new constituencies have not gone down well with the electorate. Indeed, it could be a significant reason why the proposer of the reforms, former Privileges and Procedures Committee Chairman Russell Labey, lost his seat on Wednesday.

Some successful candidates have already said that they will seek to reinstate the island-wide mandate. With a return to the old system unlikely, a Guernsey-style system – where all States Members are voted island-wide – could be on the cards, or at the very least explored.

Today's preliminary report from the observers notes: “The electoral system remains hotly debated before and during the campaign.

"Some mission interlocutors and public figures expressed regret at the loss of the eight Senator seats that had an island-wide mandate under the previous system.

“Others raised concerns about the continued existence of two separate categories of Members, despite their equal voting weight in the States Assembly.”

The observers said in today's report: “Inaccuracies of the voter register were directly observed in 34 occasions, either because voters had been re-activated from the register and did not know about it, or because of what the law describes as ‘administrative errors’.

“In constituencies where borders had changed, or where a new polling station had been created, the mission observed voters turning up at the wrong polling station.

"A few voters in St. Helier complained that the website Vote.je had directed them to the wrong polling station.”

Addressing a lack of diversity of candidates, it concludes: “The candidates standing in this election continued to lack ethnic diversity. One political party (Reform) nominated several candidates of different backgrounds, most of whom obtained seats including the first black woman Deputy and first Romanian Deputy.”

It added that the island has no special measures, such as quotas or funding, to promote candidates from different backgrounds.

Hard to work out turnout

The mission also noted that the current system made it difficult to assess turnout and needed to change.

“The total number of voters having cast a ballot was not required to be announced, which makes it difficult for the general public to calculate turnout,” it said.

“In fact, the Mission noted that the counting on the voters’ lists of the number of voters having cast a vote was not a requirement, thus impeding a reconciliation of the number of valid ballots and turnout per polling station.

“It is good practice that this information is made available to the public at the polling station level as soon as possible.”

But overall, the CPA mission, which had been invited by the former Privileges and Procedures Committee to observe the election, concluded that it had been fair and well run.

Posted by Frustrated Islander on Jun 24th, 2022
The one thing that amazed me with the voting process was the amount of manual processes involved to check my details, verify who I was, issue a voting slip and then let me vote. I am all for tradition but the lack of any modern technology to assist us would seem crazy to me.

Presumably it is the same when it comes to checking the votes made.
Posted by Keith Marsh on Jun 24th, 2022
The only thing wrong with this, and most elections, candidates do not bother to knock on doors, and seem not to care less about their potential voters.
IF they can't be bothered, why should we.
Time they ALL woke up and earned their salary.
Posted by Jon Jon on Jun 25th, 2022
Lets hope we head towards an all Island voting system ,its crazy the system at the moment.All on an Island vote ,then we get the politicians the Island want, much fairer!
Posted by Private Individual on Jun 25th, 2022
Here is a list for Mr. Boleat as to why he and his cohorts were not elected:

Charlie Parker ficasco
The Hospital Saga (£800 million)
No immigration policy (Huelin)
Increased taxation
New environmental taxes
800 more civil servants than 2 years ago
Closing of Broad Street (and the rest of Town) ARUP policy
Housing prices are through the roof!
Rent prices are through the roof!
Cyril Le Marquand House giveaway (Dandara the rent it back)!
The biggest increase in expenditure Jersey has ever seen.
The fisherman dispute

Take your pick, all of these were under the watch of the now unelected ministers and members of his party. It was the p[romise of more of the above that lost them the election and the incompetence of running the island over the past 4 years. They cannot blame anyone else but themselves.
Posted by Anthony Webber on Jun 25th, 2022
I have stood for election many times in Guernsey and was elected as both an Islandwide Conseiller and Parish Deputy in Guernsey.
I have also a huge amount of varied elections departments experience for over ten local authorities in England, especially as a Presiding Officer.
i am shocked and horrified by this initial report.
The Jersey election is shown to be a chaotic shambles.
I am surprised they did not insist it was re-run, which itself would be highly unusual.
I feel sorry for the public and the candidates having to put up with all this.
It is simply staggering and I have never heard of such a long list of election faults and inadequacies in any election anywhere in the British Isles.
Posted by Tom Hirundo on Jun 25th, 2022
It turns out that Kirsten Morel was entirely right to be worried about his incorrect association with the Jersey Alliance.
To place a comment please login Login »