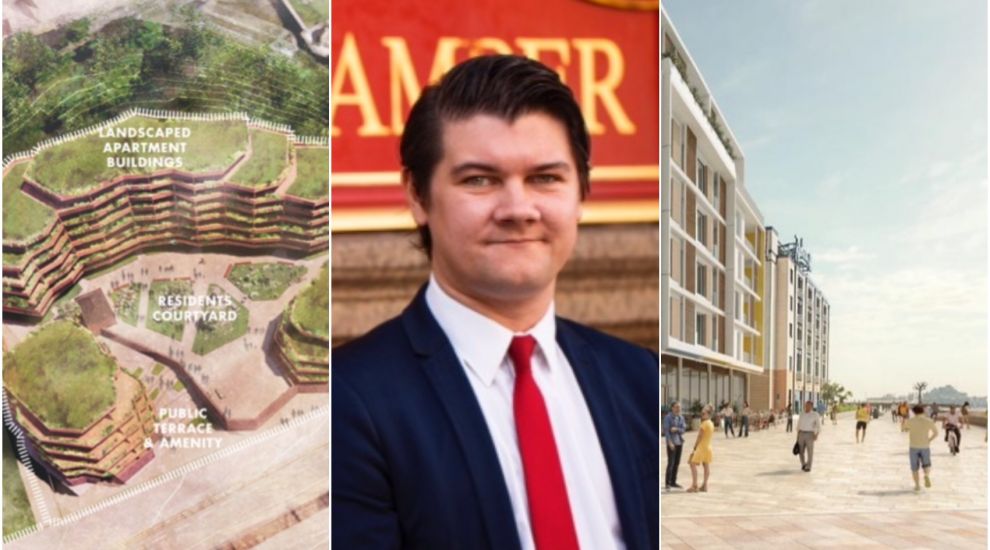 The former Housing Minister has put forward proposals to significantly increase the number of 'affordable' homes in the upcoming South Hill and Waterfront Developments.

Both developments are being progressed by the public-backed States of Jersey Development Company, which have currently only been asked by Government to ensure 15% of the homes in each development are in that category – 173 homes in total.

But Reform Jersey leader Senator Sam Mézec is pushing to increase what he describes as a “clearly totally inadequate” target.

He is now asking the Government to issue new guidance “which stipulates a minimum provision of affordable housing at no less than 50% of the homes built in the proposed developments on the Waterfront and South Hill.”

Senator Mézec had originally suggested 30% - double that which the Government is proposing – but said the housing crisis was such that a more ambitious target should be proposed.

“Jersey currently has around 2,000 applications on our first-time-buyers waiting list, and a further 1,000 waiting for social rental housing,” he explained.

“This could end up being a huge missed opportunity to meet the genuine housing need we know there is.

“Ideally, all homes built on publicly owned land should be for affordable housing options, with the private sector catering for other parts of the market if there is demand for it. The government should not be focusing its resources on providing homes which are unaffordable for most Islanders. I am therefore proposing that the government’s 15% target is scrapped, and replaced with a new target of either 50% or at least 30% for these developments.

The proposal is currently scheduled for a vote in the States Assembly on 23 November.

Posted by gordon le claire on Oct 15th, 2021
never going to happen with the lot we have as ministers the rich only look after the rich and the rich donot want renters living next to them
Posted by Martin on Oct 15th, 2021
As a good OLD local boy I have had to ( with best & 1st wife) buy at FULLl market price four times to be where we are now in a nice 4 bedroom house in a quiet area! The interest rates at one point were 15%!!

We do not have sea views as this would take our house WELL beyond our financial capabilities! Whilst it is very nice to provide affordable housing - to do so on the Waterfront & South Hill which will in MANY cases have STUNNING sea views I do wonder if these SHOULD be sold at the full market price to assist our tatty financial situation & other less delightful options for the 1st time buyers!
Our first house was at 1st Tower & it was very noisy & not very nice at all. = 1st step on the ladder!

All men are made equal but do end up in less equal houses?

A difficult subject which CAN be argued genuinely BOTH ways!


There will also be restrictions on re-sale with a restricted price -BEGGING a SACK of crisp £50 notes to get an affordable home with Sea views with work likely a 10 min walk away??

How are these going to be allocated? Locals? Families? Essentially employed? etc etc?
Posted by Keith Marsh on Oct 18th, 2021
What Mr Mezec fails to tell us is what is affordable housing in a brand new property probably with sea views ? The States have run out of OUR money to give away so who is going to pay the developer ?
I'm certain his heart is in the right place but his economic left wing politics do not add up.
To place a comment please login Login »