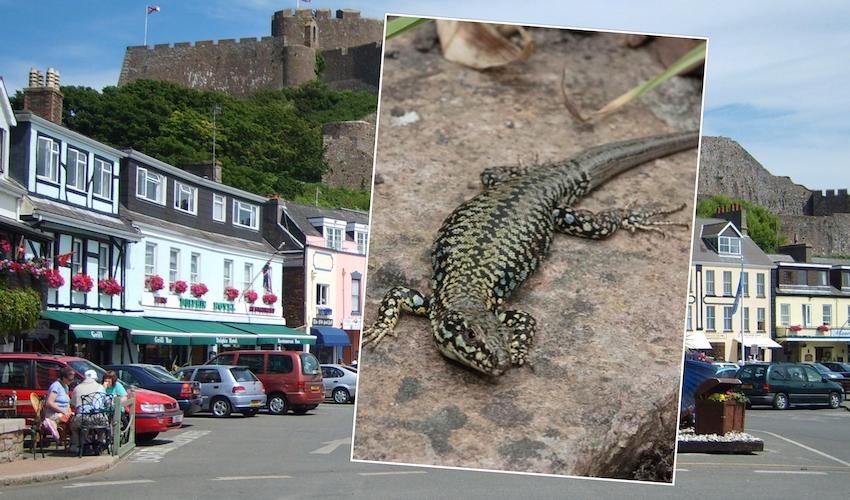 A colony of wall lizards living in Gorey is being treated to a total home makeover comprising panoramic sea views and state-of-the-art sunbathing spots.

Following the home improvements, Jersey's largest neighbourhood of lizards living in Gorey’s Devon Gardens will be able to enjoy the perks of their habitat.

A specialised Parks and Gardens team have begun work on the area which was noticeably overgrown.

The protected species prefer it lighter, so the team have been cutting back invasive trees prompted by a re-evaluation of the site by Government department Growth, Housing and Environment.

Pictured: The area where the lizards live. (Google Maps)

Bruce Labey, Municipal Services Manager said: “A team from Infrastructure has been clearing the overgrowth and we will be putting in seating areas so that everyone, including the lizards, can enjoy the outdoors and sea views.”

In January of next year, Jersey Conservation Volunteers will do their bit for the lizards’ new home by delicately removing ivy from the dry-stone walls – the creatures’ favourite sunbathing spots.

Julia Clively, Natural Environment Officer, said: “We are grateful to a whole team of people including the Jersey Conservation Volunteers and a local landscape contractor who have helped to clear the site to make it a place for the lizards to thrive.”

It’s also hoped that the Environment team and the Jersey Amphibian and Reptile Group (JARG) can work together to survey the site and educate the public on the importance of lizards and their place in the island’s eco-system.

All the work undertaken to make improvements to the area are being done with the lizards in mind, but the team are also making sure not to disturb or harm the garden’s scaly residents.

Research Ecologist, Nina Cornish from Natural Environment said: “The Gorey area holds the largest colony of wall lizards in Jersey. The lizards, their dens, and access to their dens are protected, we have to make sure we carefully manage the vegetation on site, so not to disturb them or cause harm to them.”