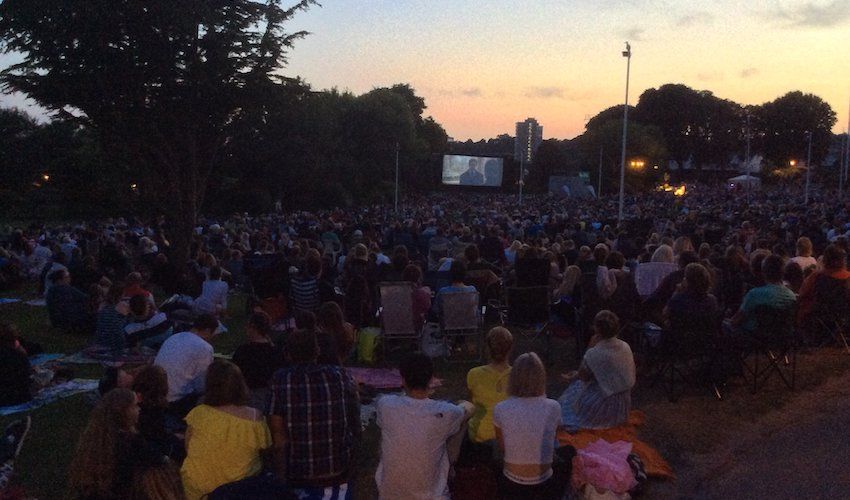 From Disney princesses to Freddie Mercury's Queen and pop royalty ABBA... The line-up for this year's Film Festival has been announced, with spectators due to be treated to a selection of singalongs.

Taking place at Howard Davis Park between 3 and 8 August, the event will see six films aired in total - five of which being musicals.

The event is free to attend, but each screening will be held in support of a different charity, which attendees are encouraged to support.

The festival will fly into Howard Davis Park on 3 August with Tim Burton's 'Dumbo'. The live-action retelling of the Disney's classic was released earlier this year with a cast including Colin Farrell, Michael Keaton, Danny DeVito and Eva Green.

Sponsored by Rathbones, this screening will collect funds for wildlife conservation charity Durrell, which is celebrating its 60th anniversary this year.

Video: Dumbo, tells the story of a young elephant, whose oversized ears enable him to fly and help save a struggling circus.

'Dumbo' is the only movie out of this year's selection that is not a musical.

Following a very successful screening last year, organisers Deputy Kevin Lewis and his wife Isabella, have chosen to show 'The Greatest Showman' for a second time.

This time, though, the circus-themed musical starring Hugh Jackman will be presented in a singalong version. Spectators will get to sing with the characters to the tune of 'The Greatest Show', 'This is Me' and 'From Now On', among the musical's other hits.

Loosely based on the life of Phineas Taylor Barnum, founder of the Barnum and Bailey Circus, 'The Greatest Showman' will be screened on 4 August. Sponsored by The Idea Works, it will raise funds for Brighter Futures, a charity that supports parents, carers, children and young people in Jersey.

Rock champion Freddie Mercury will then burst onto screens on 5 August in the multi-Oscar-winning biographical movie, 'Bohemian Rhapsody', which follows the star and his band Queen.

Starting in the early 1970s the movie shows Queen's rise to fame leading up to their famous performance at Live Aid in 1985. Rami Malek stars as Mercury, a performance that earned him an Oscar, a BAFTA, a Golden Globe and a Screen Actors Guild award.

This screening, sponsored by Saltgate, will raise funds for Beresford Street Kitchen, a social enterprise providing training and employment for people with learning disabilities and autism.

For those more into pop than rock, the next screening will be just the thing: 'Mamma Mia! Here We Go Again' will be played on 6 August.

Taking place five years after the events of the first movie, the sequel to 'Mamma Mia!' sees Sophie (Amanda Seyfried) prepare for the grand reopening of the Hotel Bella Donna as she learns more about her mother's (Meryl Streep) past.

Video: In addition to the cast of the original movie, 'Here We Go Again' stars Lily James and Cher.

Like the first movie, the soundtrack exclusively consists of songs from Swedish pop group Abba. This includes 'Waterloo', 'SOS', 'Knowing Me, Knowing You' and, of course, 'Mamma Mia'.

The screening will be sponsored by Dandara and raise funds for Jersey Hospice Care, which provides specialist palliative care, free of charge, for patients with life-limited conditions.

Next on the programme will be another sequel. 54 years after 'Mary Poppins', Emily Blunt took on the role of everyone's favourite nanny under the direction of Rob Marshall.

In 'Mary Poppins Returns,' the practically-perfect nanny with unique magical skills comes back to look after the next generation of the Banks family.

The cast includes Lin-Manuel Miranda, who created the musical about the life of American Founding Father Alexander Hamilton, as well as Meryl Streep, Colin Firth, Julie Walters, Ben Wishaw and Dick Van Dyke, Bert in the original movie. Shown on 7 August, the screening aims to please all the family and will raise funds for children's charity NSPCC.

The festival will close on 8 August with a screening of 'Aladdin.'The live-action adaptation of Disney’s animated classic is directed by Guy Ritchie and stars Will Smith as the Genie, Mena Massoud as Aladdin and Naomi Scott as Jasmine.

Video: The live-action adaptation of Disney’s animated classic is directed by Guy Ritchie.

In addition to the original plot, 'Aladdin' has also nabbed some of the songs from the animated movie, including the classic 'A Whole New World'.

This final screening will raise funds for Autism Jersey, the leading charity in Jersey dedicated to the assistance and support of people on the autism spectrum.

All the films start at 20:30 each evening, but the park is open for people to have picnics on the grass beforehand.

Last year, donations helped raise a total of £7,094 for the various charities.