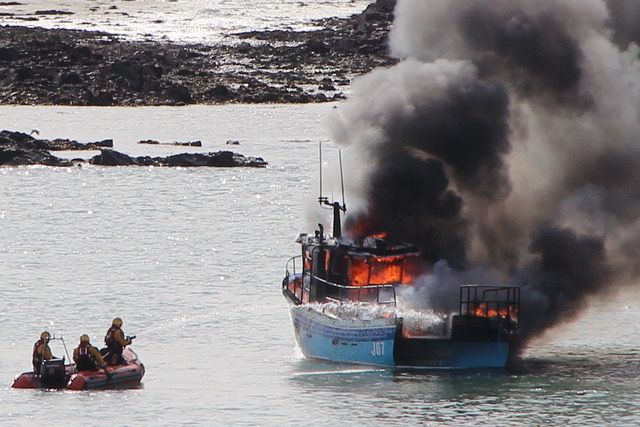 Explosions were heard on board a fishing boat during a dramatic blaze near Elizabeth Castle yesterday – but the exact cause of the fire remains unknown.

Fire and Rescue officials are now undertaking an investigation into exactly what happened, following yesterday’s intense three-hour operation to tackle the inferno in the 'small roads' between Elizabeth Castle and Elizabeth Harbour.

The RNLI George Sullivan all-weather lifeboat launched shortly after 16:23 amid reports from islanders of thick plumes of black smoke extending metres into the sky.

Fishing boat currently on fire in the small roads pic.twitter.com/enHA0l5mOY

It emerged that this was coming from fishing boat J67 Ocean Blue, whose owner and crew member had luckily already been safely evacuated with the assistance of a nearby vessel. Neither suffered any injuries.

On its approach, the George Sullivan crew say they witnessed “a number of explosions on board the fishing boat so remained at a safe distance and kept all nearby vessels out of the immediate area.” They said they were concerned by the “risk” of the flares, fuel and gas cylinders still on board.

The Fire Service’s White Watch team attended the scene to tackle the flames with their Inshore Rescue Boat, using a portable firefighting pump. A fire engine remained on shore.

Once the fire was under control, the boat was hauled into deeper water, where the RNLI used their hydrant to dampen the vessel.

The boat was finally deemed “safe” and towed to a lifting point before being handed over the Coastguard at 18:40.

A detailed assessment of the vessel was undertaken by Fire and Rescue officials to ensure there was “no further threat from fire” at La Collette Marina.

Full harbour restaurant 'to be open by Easter'