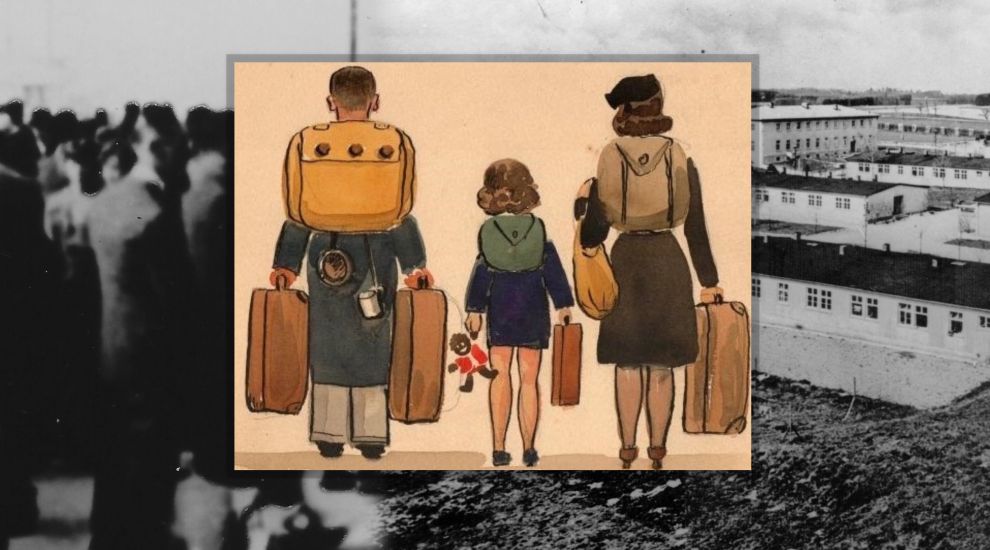 80 years ago this week, British residents in the islands were told they would be evacuated and interned at camps in Germany. It was a terrifying experience for many, and was closest Jersey came to a revolt against the occupying forces.

The event started the previous year, when Britain had detained German civilians working in Iran, which angered Hitler, who immediately retaliated and issued an order demanding British born citizens living in the Channel Islands be detained as way of reprisal.

Many senior Officers in Germany were against the idea and so the order disappeared for a year, until the Swiss Government suggested an exchange take place between British and German seriously wounded prisoners of war, at which point Hitler realised the order from the previous year had been ignored and re-issued it with immediate effect.

On the morning of 15 September 1942, the deportation order arrived in Jersey and the Bailiff of Jersey, Alexander Coutanche, was summoned to a meeting at College House, by the Island Commandant, Colonel Knackfuss. 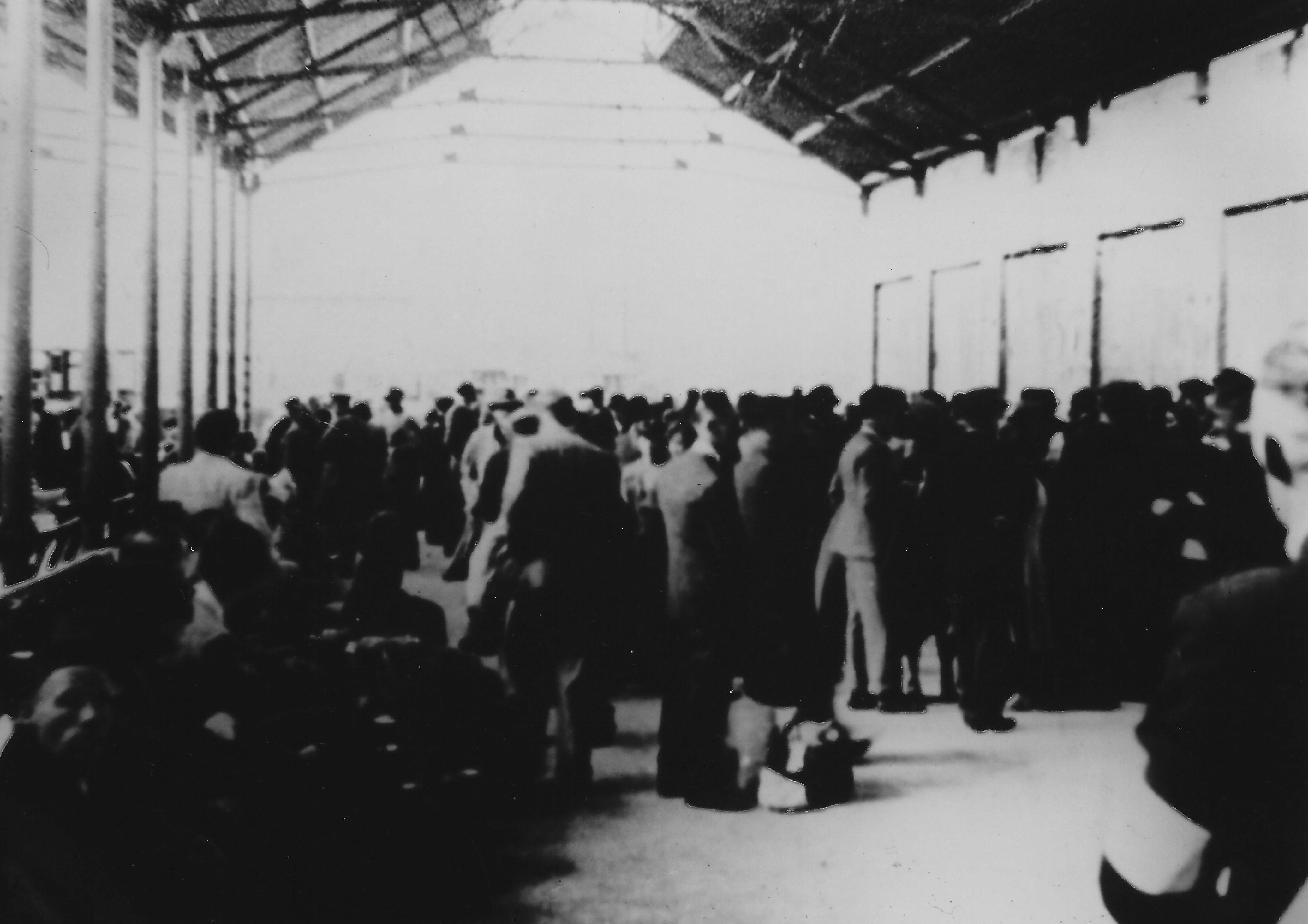 Pictured: Deportees at the Weighbridge, September 1942.

The order was read to the Bailiff, who formally protested.

Knacfuss told Coutanche, he had been surprised by the order and had questioned it. He was told it had been issued directly by the Hitler and it could not be over-turned. 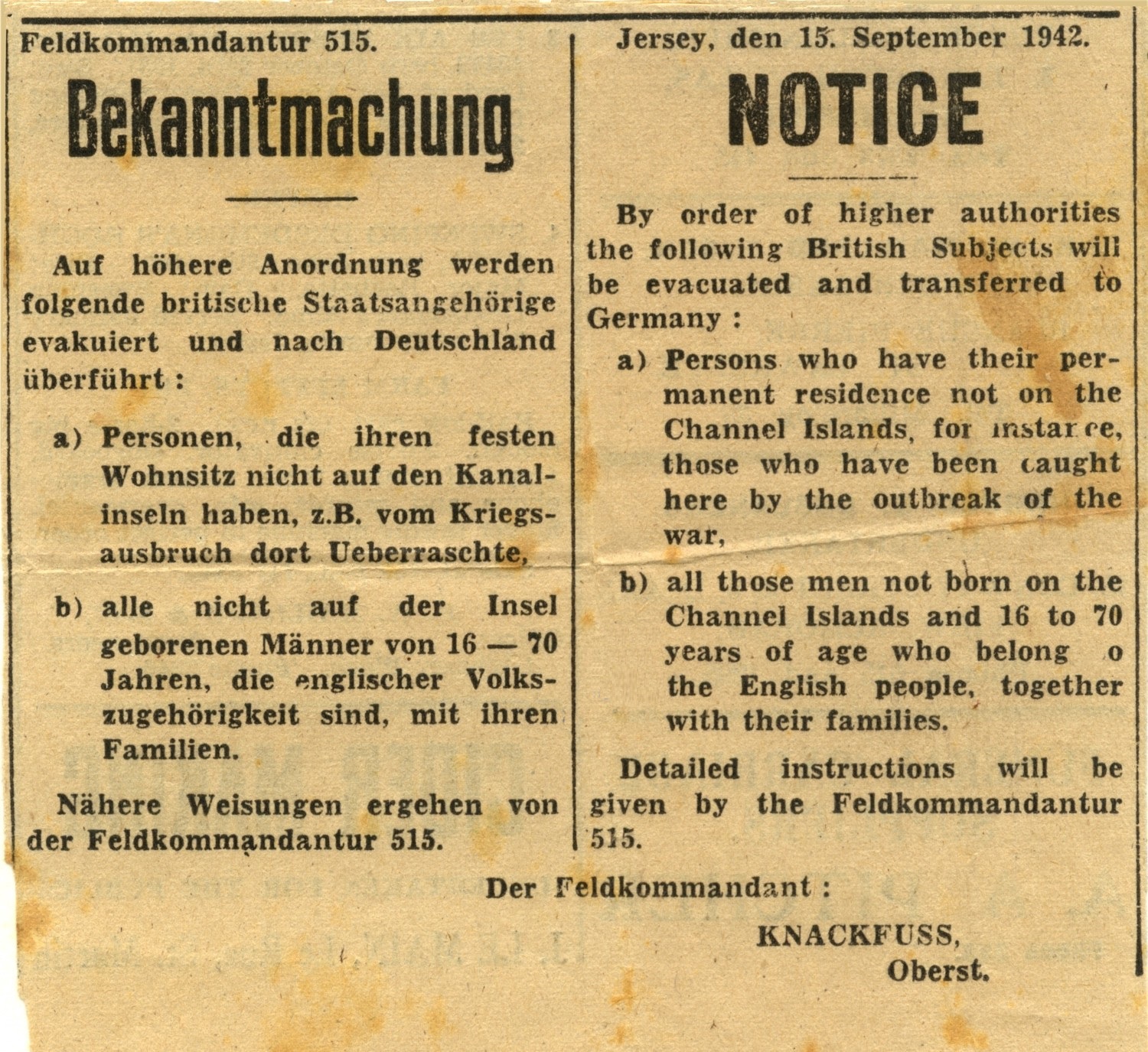 Pictured: The deportation order of 15 September 1942.

The Baillif informed the States Members, and many wanted to resign from their posts, including the Bailiff, but after some debate reconsidered the situation and felt their actions would not benefit the local population and so decided to stay in their posts.

A short time later the order was made public, the noticed stated:

"By Order of the High Authorities the following British subjects will be evacuated and transferred to Germany:

(a) Persons who have their permanent residence not on the Channel Islands, for instance those who were caught here by the outbreak of war.

b) All those men not born on the Channel Islands and 16 to 70 years of age who belong to the English people, together with their families. Detailed instructions will be given by the Feldkommandatur.

During the evening, numerous residents were handed a notice which read:

"In Pursuance of a Higher Command, British subjects are to be evacuated and brought to Germany. You have to appear, therefore, on 16th September 1942 not later than 4 o'clock at the Garage, Weighbridge, St. Helier.

"You have to take with you all papers providing your identity. It is necessary to outfit yourself with warm clothes, strong boots and provisions for two days, meal dishes, drinking bowl, and, if possible, with a blanket. Your luggage must not be heavier than you can carry and must bear a label with your full address. It is further left to you to place ready, for each person, a trunk packed with clothes to be sent afterwards, labelled with full address. It is also left to you to take with you an amount of money not exceeding 10 Reichsmarks for each person.

"All valuables (jewels) must be deposited as far as possible with the banks. Keys of the houses are to be handed over to the Constables. Should you fail to obey the order, sentence by Court Martial shall be effected."

The order sent a shock wave through the islands and led to several marriages between English born girls and local men. It also led to a tragedy at Beaumont, where a married woman died after being gassed.

The inquest recorded death by suicide. 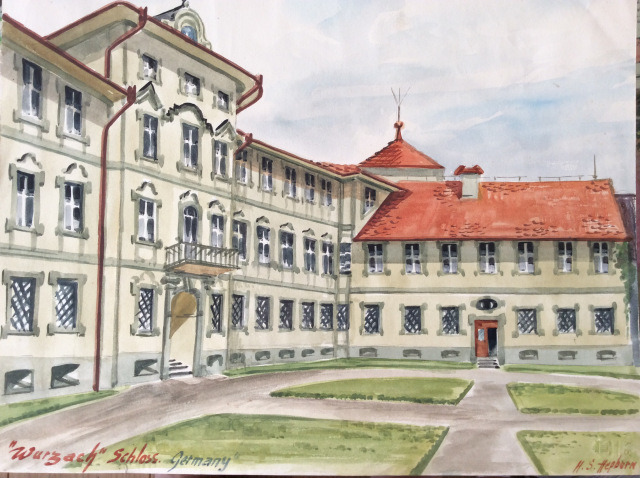 Pictured: Bad Wurzach painted by a Jersey internee in 1943.

Over the next few days, the Harbour area was packed with those leaving and loved ones cheering them off.

Armed German soldiers were there to control the crowds and many of the evacuees remember the soldiers and sailors being apologetic, they felt the order was wrong. 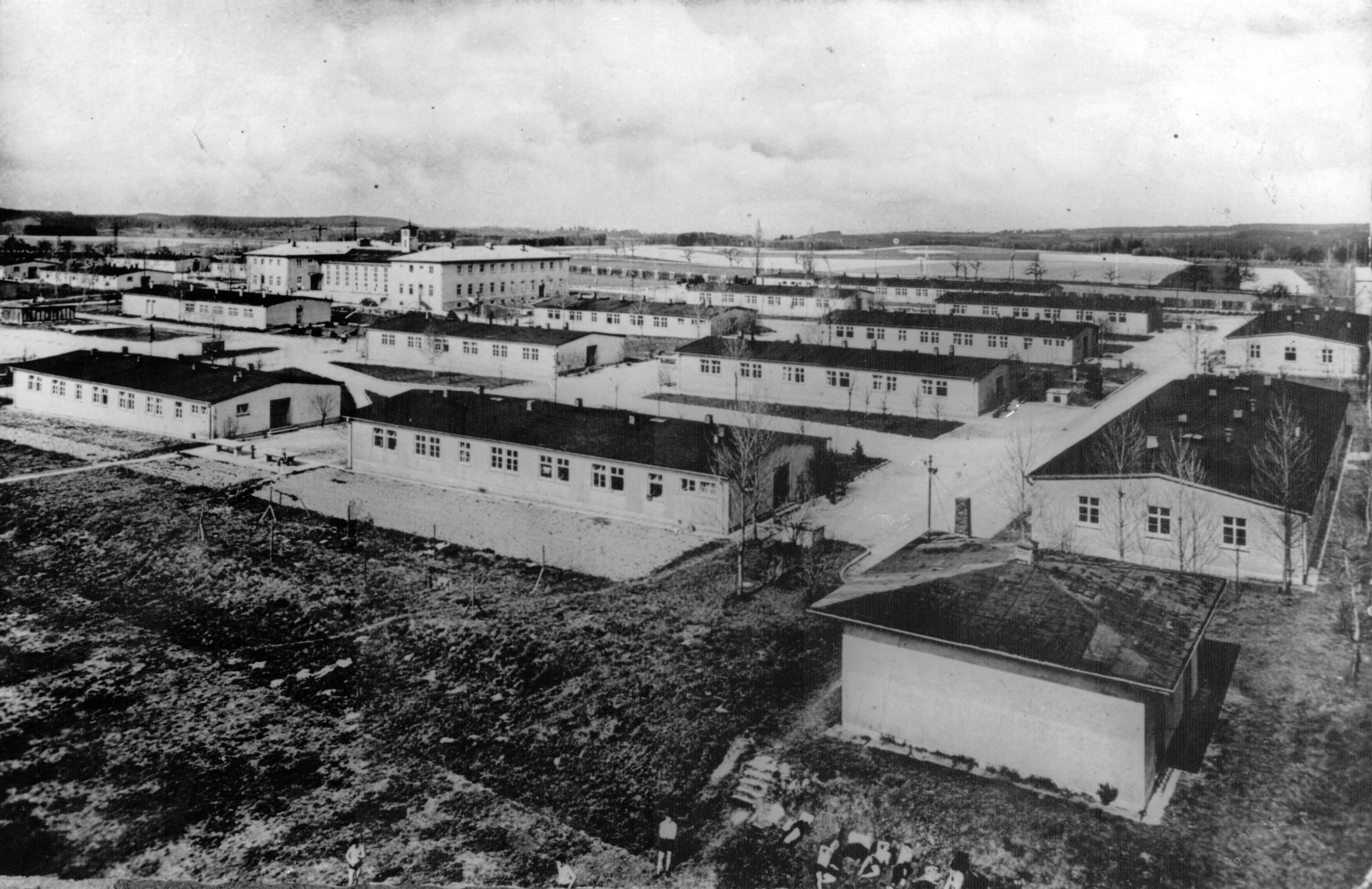 Pictured: The Internment Camp at Biberach.

But, despite this, tensions ran high with locals holding patriotic demonstrations which resulted in the German authorities closing some areas around the Harbour, as light skirmishes occurred, possibly the closest Jersey came to a revolt against the occupying forces. 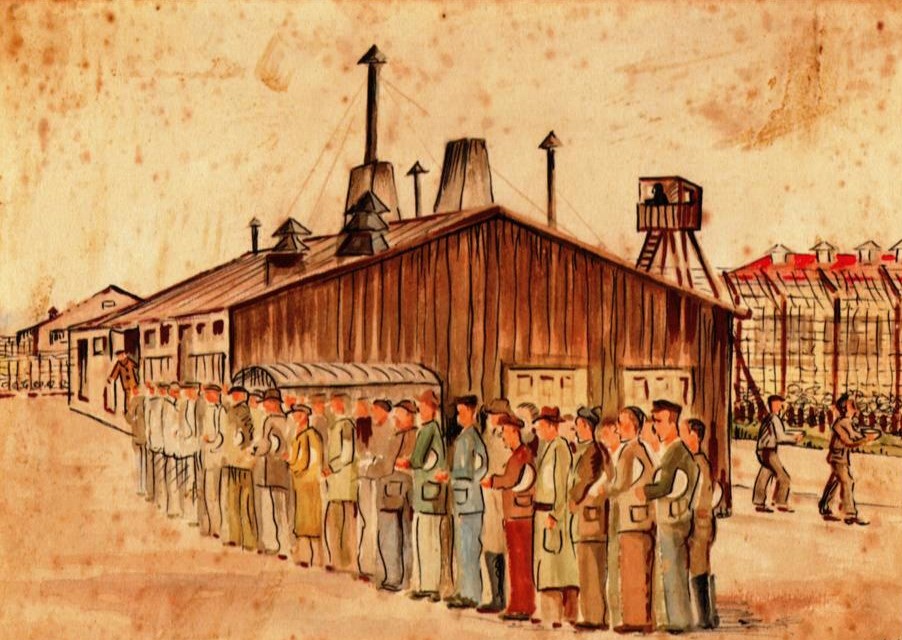 In total, 2,300 civilians from the Channel Islanders were interned at camps at Bad Wurzach, Biberach and Laufen.

Such were the numbers of Channel Island deportees at Biberach that an inter-insular 'Muratti' football match staged there on Easter Monday 1944 attracted a crowd of 1,000, people. 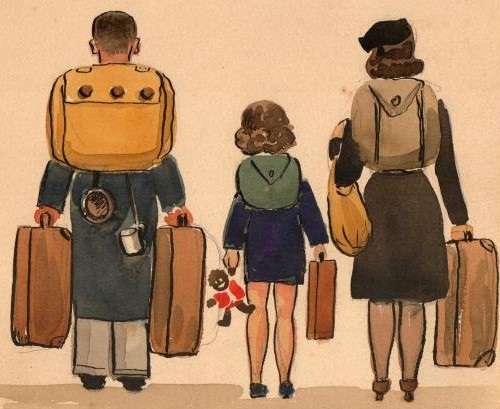 Pictured: Family on their way to the internment camp.

Many visits have occurred by surviving internees over the years and in 2002 St. Helier was twinned with the town of Bad Wurzach, as a sign of reconciliation. 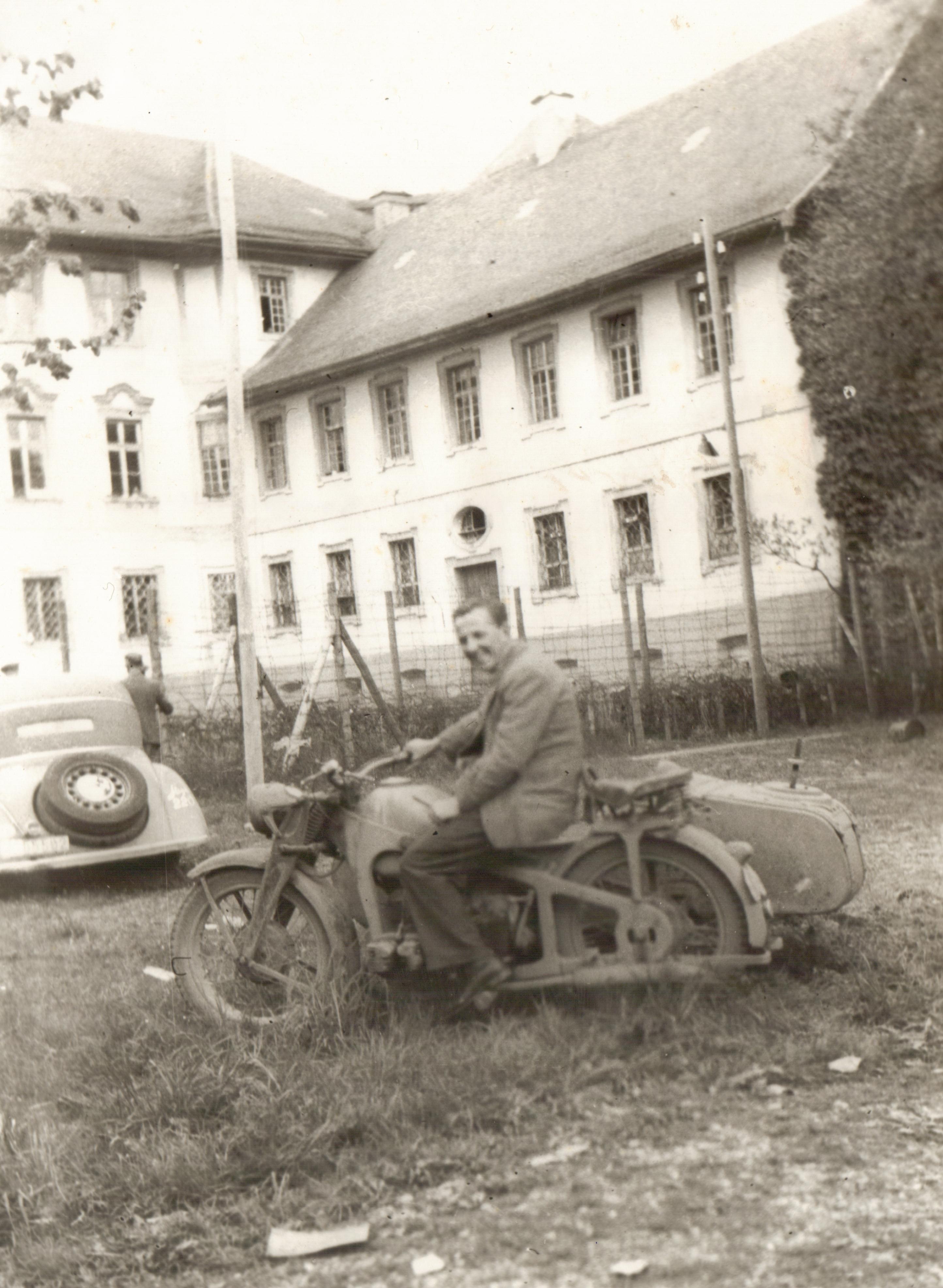 All the paintings featuring in this article were created by a local artist called Harold Hepburn, whilst he was interned in Germany.

At the start of the Occupation, Harold worked as a sign writer for Le Brocq & Borney. Soon after arriving in the Island, the German authorities requested that Le Brocq & Borney produce various types of signs and notices for them, many of these were painted by Harold.

In September 1942, Harold Hepburn was deported, with his family to Bad Wuzach. Fortunately, Harold took his paint brushes with him and began to paint scenes in and around the internment camp, along with birthday and greeting cards for other internees.

When Harold returned to Jersey after the war, he continued to work as a sign writer and painter for Le Brocq & Borney.

Harold brought his paintings back to Jersey on his return, and many are held in the CIOS collection, at Jersey Archive.

The above photo shows Harold Hepburn, or ‘Heppy’ as he was known, sitting on a German motorcycle just after the Liberation of Bad Wuzach, April 1945.