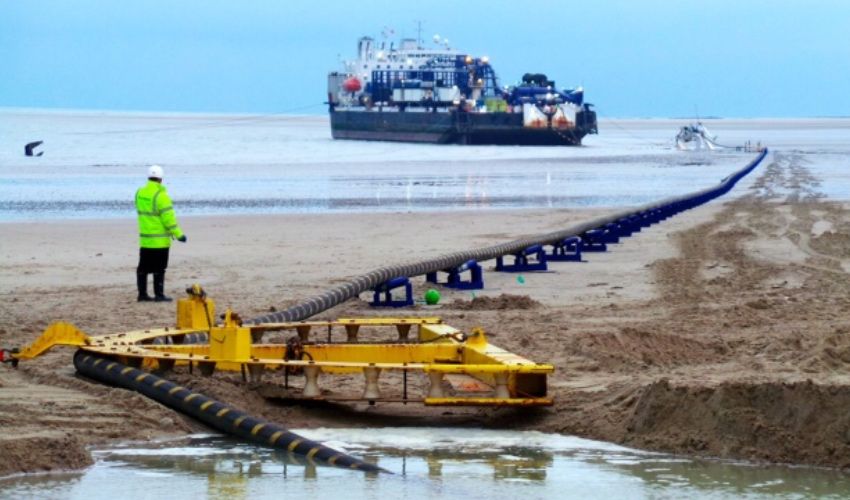 Last week’s threat by a senior French politician to cut off the electricity supply to Jersey is evidence that the island needs to accelerate its efforts to achieve greater energy security, according to a former Environment Minister.

So what could such solutions look like and how does the new short-term Island Plan fit into this?

The threat to pull the plug

Minister of the Sea, Annick Giradin’s, comments in the National Assembly were widely reported and contributed to last week’s febrile atmosphere over fishing rights, both in the waters around Jersey and politically.

The Government disputed whether the threat could ever come to fruition, arguing that Jersey’s power supply from France - which Guernsey also relies on - was a watertight commercial relationship with EDF that runs until 2027.

However, despite Mme. Girardin’s rhetoric, it did prompt Jersey Electricity to reassure customers that the island had enough on-island capacity, with its steam and diesel generators, to keep the lights on, should French supplies be disrupted.

Following enquiries from our customers regarding the French fishing dispute, JE can reassure customers that in the unlikely event electricity supplies from France are disrupted, La Collette Power Station and Queens’ Road has capacity to supply Jersey’s electricity requirements pic.twitter.com/2W0WR3lGTf

It also prompted Guernsey Electricity CEO Alan Bates to comment: “The current situation again demonstrates the need for Guernsey to have its own direct cable link which would connect with the European grid via France and provide enhanced security of supply.”

The case for local power

Former Environment Minister Rob Duhamel also sees a need for more energy security, despite the benefits of the French supply.

“The laying of the interconnector cables to France and our connection to the French national grid has helped Jersey to significantly reduce its carbon footprint," he said. 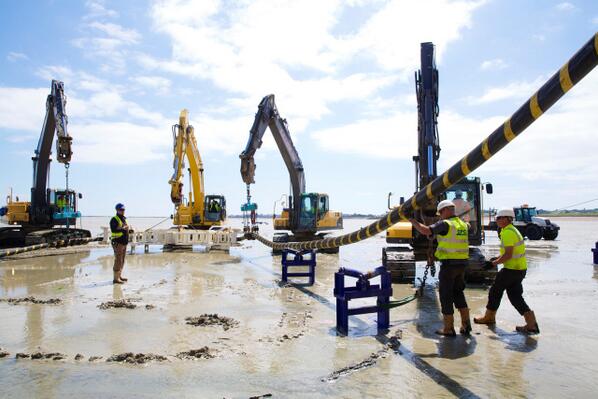 Pictured: A new electricity cable between France and Jersey was laid in 2016.

“However, the French system is heavily reliant on nuclear power which involves significant carbon production in both uranium mining and the decommissioning of old nuclear power plants. For Jersey to pay its full part in a sustainable future, we should be looking to local renewable energy sources such as wind and solar.

“The need to do this was brought into sharp focus last week when the French Maritime Minister issued her threat. While this immediate threat has receded, it does suggest that we should accelerate our moves towards locally generated and fully sustainable energy."

He continued: ”Advances in technology bring a range of renewable sources within reach: Jersey could invest in its own offshore wind turbines.

“On an individual level, solar panels now give householders the ability to produce their own electricity without the need for a grid.

“Renewable sources don’t provide reliable 24/7 power and we will also need to see further improvements in battery and storage techniques before householders can move fully off grid.

“An interesting idea that could be looked into would be a scheme using the height of the north coast to store energy by pumping water to the top of a cliff reservoir at times of excess energy and generating electricity as needed using turbines as the water drops.

"There is no immediate prospect of Jersey ending its reliance on the French grid but it would be very sensible to move as quickly as possible to increasing local supply both at a household and island level. This will both protect Jersey’s independence and support our important move towards full environmental sustainability.”

The current Environment Minister, Deputy John Young, said that his department has been developing long-term proposals to make the island more self-sufficient for some time and the comments of Mme. Girardin last week were more of a “a political negotiating position” than a genuine threat.

He said: “I find it incredulous that it was a serious proposal and I’m sure it was more of a political negotiating position, but it was evidence that it’s something the Island has to think about.

“It is sensible to look at the potential for utility-scale renewable energy sources in Jersey and the bridging Island Plan sets a strategic direction, providing guidance and where there is more potential and where those areas might be.

“It is not in favour of onshore wind generation but does set out policies for micro-renewables such as solar panels, small-scale wind turbines and in ground heat pumps.

“It also sets out a vision for future energy production which would certainly give us greater energy security, but it will be up to the Citizens’ Assembly on Climate Change to really dive into the detail.”

The latest Island Plan, which has been shortened from its usual 10 years to cover 2022-2025, sets out a number of long-term, viable scenarios for greater energy efficiency.

It says: “Currently, virtually all of Jersey’s primary energy is imported in the form of low-cost, low-carbon electricity from France through a series of subsea inter-connectors.

“This has some benefits to Jersey providing access to cheaper, more reliable energy than might otherwise have been possible.

“However, the global energy market remains unpredictable, France is looking to decommission some generators, and Jersey seeks to build in more grid resilience, sufficiency and security itself. Fortunately, Jersey has wind, tide and solar assets that could be harnessed for renewable energy generation.

“The Island Plan recognises that generating renewable energy at utility-scale would be possible, realising that this requires a long-term vision and framework to encourage investment.”

Previous studies have concluded that an offshore wind farm spanning the western edge of Jersey’s territorial waters, around ten miles out, would be a large-enough area for a commercially viable operation. It would be close to a French 62-turbine farm which has just started being constructed in the Bay of St. Brieuc. 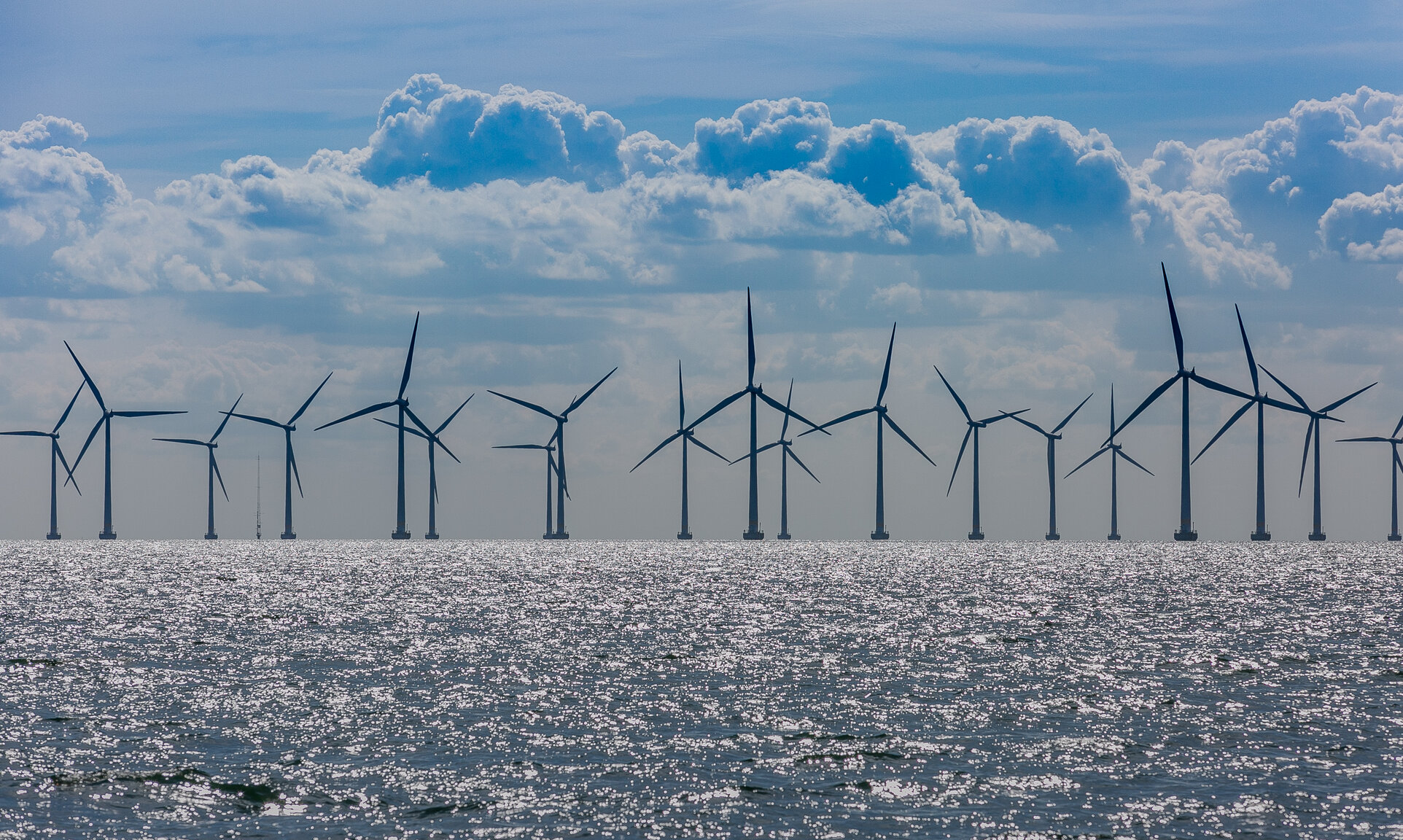 Pictured: Jersey could build its own offshore wind farm, similar to the French.

Last week, French fishermen from the area protested around a specialist ship driving the first piles of the project.

It has been estimated that extracting energy from just 5% of Jersey’s waters would satisfy over three times Jersey’s current annual demand.

Another viable option would be to build a tidal lagoon to take advantage of Jersey’s large tidal range.

The Island Plan says: “A tidal lagoon would represent utility-scale renewable energy generation that could ensure Jersey has a more reliable energy supply, be more resilient to market shocks, and with the potential to make revenue from exporting energy.

“Tidal lagoon development opportunities can be co-located with other uses in the marine area, including with aquaculture and leisure, and integrate with local regeneration.

“Consideration would, however, need to be given to the likely significant effects on marine ecology, landscape and visual impacts, including effects on seascape, and potential heritage impacts of any potential tidal lagoon scheme.” 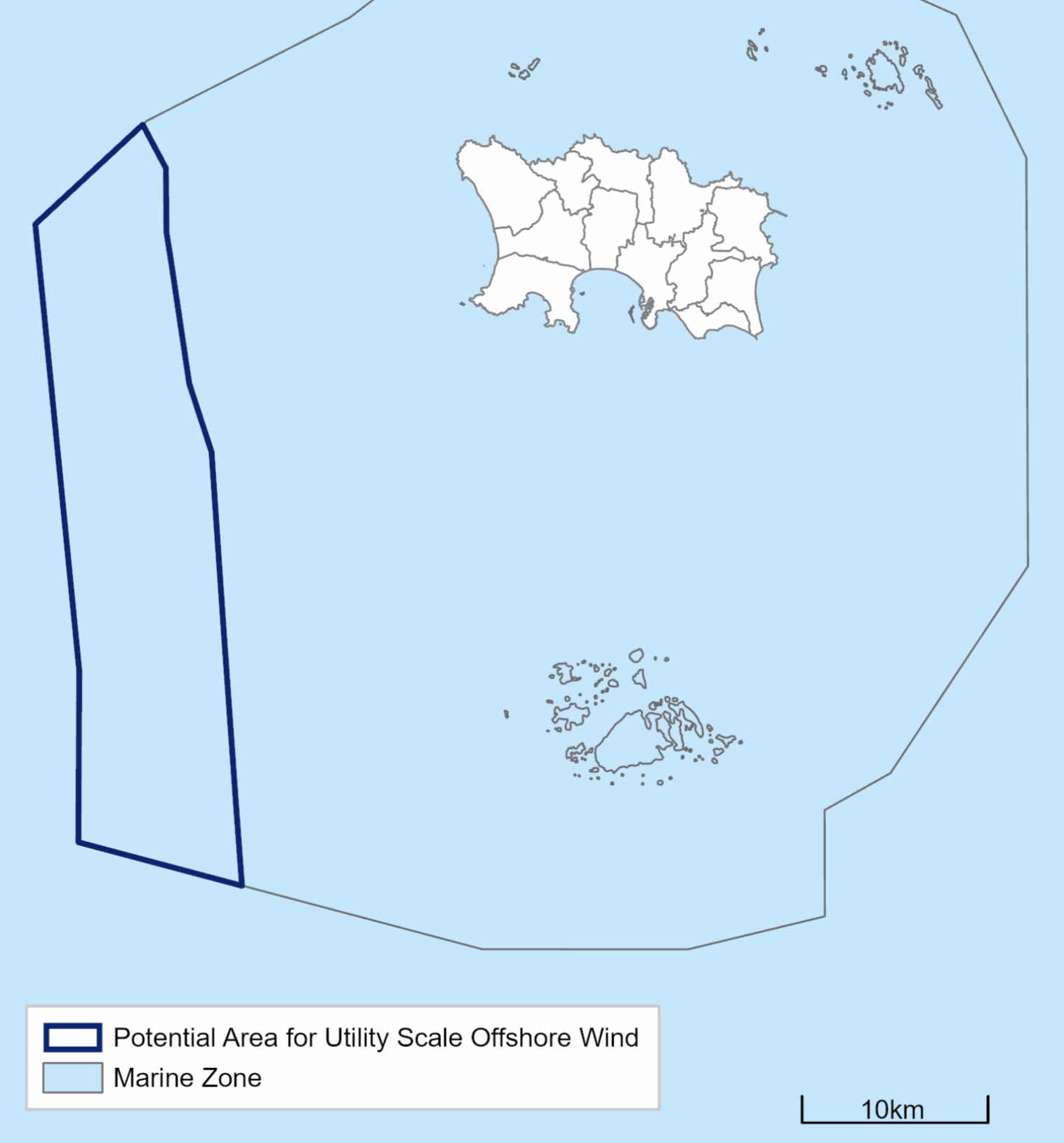 Pictured: Where Jersey could site an offshore wind farm, from a 2018 study that feeds into the latest Island Plan.

A previous viability study has earmarked St. Aubin’s Bay as a potential lagoon, with a barrage built from La Collette to St. Brelade containing electricity generating turbines. It is thought it would create enough energy to power the whole Island and leave an exportable surplus.

The lagoon idea is regarded as preferable to submerged tidal stream generators:

“A tidal stream development would be unlikely to provide a competitive return in comparison to other renewables such as wind and tidal lagoons,” says the Island Plan.

The official policy set out in the Island Plan, which is now open to consultation, is that “development proposals for exploratory, appraisal or prototype offshore utility-scale renewable energy schemes will be supported, where their environmental impact is considered to be acceptable.

It adds that proposals for full-scale offshore renewable energy generation schemes will be supported where it can be demonstrated that:

The plan adds that planning permission for all types of offshore renewable energy proposals will be subject to a time-limited permission.

It also supports “ground-mounted solar arrays” on agricultural land “where the benefit of the scheme will outweigh any loss to the agricultural industry, with positive consideration given to the redevelopment of glasshouse sites for this purpose.”

Posted by Martin J on May 11th, 2021
I AM led to believe that the Nuclear power we enjoy is from a private French company & it would take the French Government to change the law to enforce them to cut our supplies & I am also led to believe that Jersey is it,s best customer & it is unlikely this French company will drop their greatest income for a fishing matter which likely does not concern them?

Especially if they know - which they Do - that we can still survive without them - just at a greater cost.
Posted by nigel pearce on May 11th, 2021
I like the idea of a tidal lagoon to provide us with energy. I also think that consideration should be given to installing one or two Rolls-Royce SMRs. Nuclear installations are no more ecologically damaging than the alternative solar and wind options which also involve mining to obtain the precious metals required to build them, plus they would have to be transported to Jersey then exported for decommissioning later.
Posted by Scott Mills on May 12th, 2021
Jersey could not survive entirely forever without the nuclear/fossil fuel power station from abroad end off. Renewable energy at the moment isn't advanced enough to be done entirely without fossil fuel/nuclear power stations. It's just not reliable enough, plus I would say the biggest problem isn't where the energy is derived from, but the storing of the power (we'd probably need an array the size of jersey) to provide enough electricity for the island.
To place a comment please login Login »

READER LETTER: “The beer will no longer taste quite the same”