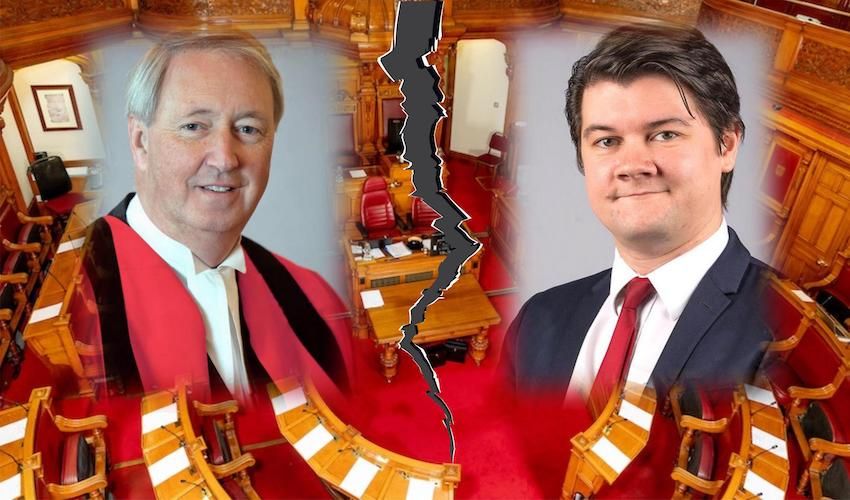 Fresh plans to eject the Bailiff from the States Chamber will roar into motion this week, after a defensive speech from Sir William branded “disgraceful” by one Minister backfired.

The Council of Ministers will this week discuss whether to back a new bid to oust the Bailiff from his traditional dual role as President of the States Assembly and Head Judge.

The new proposals are being pushed by Housing and Children’s Minister, Senator Sam Mézec, who has pledged to bring the legislation forward for debate alone if he fails to secure the support of his Ministerial colleagues.

Despite previous failed attempts to instead introduce a UK House of Commons-style ‘Speaker’ into the States Assembly, Senator Mézec told Express that there was renewed interest for the idea after Sir William Bailhache “completely shot himself in the foot” during a speech last week in which he lashed out at a finding of the Care Inquiry that recommended his removal from Jersey’s parliament.

Pictured: Sir William is due to step down from the role this week.

Critically echoing the words of Panel Chair Frances Oldham QC in the Care Inquiry report, the Bailiff said: “I cannot accept a lawyer of the chairman's experience would inadvertently have drafted such an unfortunate juxtaposition of words. I am sure that the way in which Jersey receives her panel's report matters greatly to her. Her linkage of the allegations of lack of fairness in transparency and decision-taking by the Bailiff to historic child abuse was a grave error.”

Numerous States Members rose to ask questions on the matter, while the Housing Minister was refused the opportunity to make his own statement.

The ”political” intervention sent shockwaves through the States Assembly and led to criticism from politicians – some of whom had previously supported keeping the Bailiff within the States.

“I’ve been speaking to politicians who’ve said, ‘That’s pushed me over the edge.’ At least two I’ve spoken to have changed their minds because of that,” Senator Mézec explained.

He later added: “One of the main arguments against ending the dual role is that all of our Bailiffs have acted impartially and apolitically, but [the speech] has proved what a load of nonsense that is. He could not have been more overtly political if he tried.

Pictured: The Bailiff criticised the Care Inquiry in his last speech to the States Assembly.

“It was a speaker of a parliament directly intervening in politics and encouraging members to disregard a report which the elected government has accepted – imagine John Bercow doing that!”

The Minister says he will be bringing a near “copy” of previous proposals to create an elected Speaker by the then Chief Minister Senator Ian Gorst to a Council of Ministers meeting on Wednesday and will ask for their backing.

The plans failed to gain enough votes to pass at the time, and were also subject to a “wrecking amendment” in the form of a public referendum on the matter.

Senator Mézec hopes that the topic of a referendum won’t rear its head this time, however.

“It would be down to somebody else to bring forward a motion for a referendum. When it’s been done previously, it was done by [previous Bailiff and brother of Sir William] Senator Philip Bailhache, who was conflicted, and last time it was done by Philip Bailhache’s Constable. What a coincidence. Anyone is free to lodge a wrecking amendment if they want, but I would oppose doing so,” he said.

Pictured: A fresh bid is being made to oust the Bailiff and elect a 'speaker' to preside over States sittings.

“Those people should have the courage to vote against the separation of powers rather than palming off their decisions on the public in an exercise that would cost £100,000 and get us nowhere.”

The news comes as Sir William Bailhache enters his final days as Bailiff.

The current Deputy Bailiff, Tim Le Cocq, will be sworn into the role on Thursday.

Posted by David Moon on Oct 14th, 2019
If States members feel so strongly about the dual role of the Bailiff why did they not make it an election issue last year. Perhaps the public prefer to have someone whom they know not to be involved in the day to day politics to preside at States Sittings than be subject to someone who will have political leanings which may affect his judgment. viz a John Bercow. Why is he afraid of a referendum?
To place a comment please login Login »