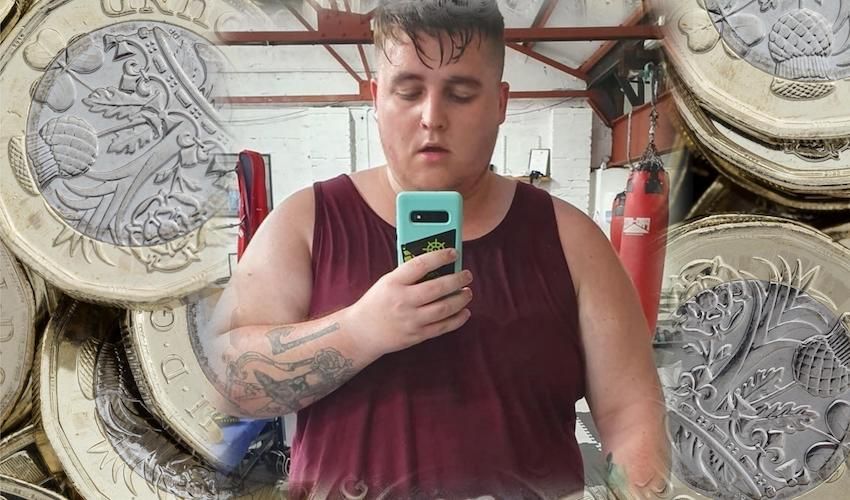 A telecoms worker has gone from only ever running when he was late for the bus to hitting the gym every day, as part of a sponsored weight loss mission that has seen him shed almost two stone in just eight days.

Over the first week of his challenge, Chad Wood has managed to lose 1.9 stones and raise over £1,400 for the Animals' Shelter through a strict regimen of training and a total diet overhaul.

“Over the last couple of years the most running I've done has been trying to catch the bus so to go from that to where I am now has been incredibly hard, but I am determined!” Chad joked.

His winning start is just the beginning of a month-long ‘Losing pounds (lbs) and raising pounds (£’s)’ challenge and so far, he says, the results have taken him completely by surprise. All the proceeds from Chad’s fundraising efforts will go to the JSPCA.

Pictured: Chad's efforts are in aid of the JSPCA.

The software tester told Express: “The support so far has frankly been mind-blowing. I initially set up the fundraiser thinking that I could maybe get a couple of friends and some family to throw in a fiver here and there so I set the initial goal at £200 which I personally thought was a bit cheeky and might have been a stretch!”

Now ‘trending’ on GoFundMe, Chad’s campaign is receiving far more attention than he ever expected and his humble target of raising £200 “was absolutely smashed in less than three hours.”

He said that his running fundraising total “is not only amazing for the JSPCA who will get every penny but [it’s] also an amazing incentive for me, knowing that so many people are supporting me and cheering me on in this challenge has really been a huge motivator for me to keep going as far as I can.

Pictured: Chad has been hitting the gym every single day in his month-long challenge.

The money raised from the crowdfunding page will supplement his sponsorship from his employers, JT and his gym The Rock Fitness who are each donating £2 to the JSPCA for every pound of weight Chad loses in August.

Speaking of his strict training regimen, Chad said “it’s been pretty tough,” explaining that so far in his challenge he has been hitting the gym after work every day doing cardio, weight training and even boxing to try and reach his fitness goal.

Outside of the gym, Chad’s made some other big changes, including a complete overhaul of his diet – cutting out processed foods and sugar, reducing his carb intake and quitting drinking.

Pictured: Chad's approach has been a combination of rigorous training and a strict diet.

“It's been a huge challenge resisting the temptations of colleagues' birthday cakes and homemade desserts at barbecues but I think the results so far are speaking for themselves!”

Babs Keywood from the JSPCA certainly thinks so as she applauds Chad’s commitment to the challenge. She said: “Chad is doing so well; well on his way to raising £2,000 now!

“Chad’s money will allow us to look at areas which need revamping, redecorating, electrics needed and help us ensure that we always provide the best possible treatment for the animals in our care.

“We can’t thank Chad enough for his dedication and would love to show Chad our facilities and some of the areas where his money will be used. We like to keep our fundraisers updated too, so Chad would be welcome back to see our finished projects in the future.”

When asked if he would encourage others on their own fitness journeys to go about it this way, Chad said: “Absolutely! If you're someone who maybe struggles to motivate themselves or struggles to get started with things like your health then find a reason that isn't just you.

“Without so much support coming in, in the form of donations, I don't think I'd be doing as well as I am in this. It means I have people to prove myself to and of course, awesome little animals that need my help!”