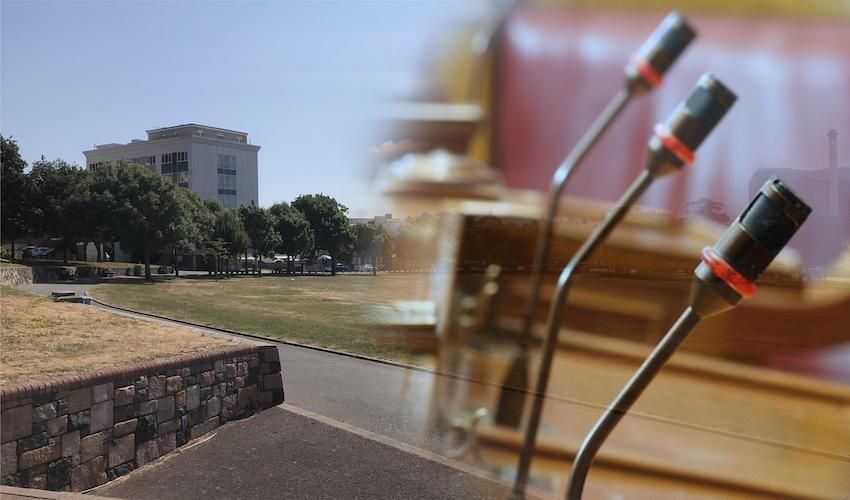 In a vote which was almost split exactly down the middle, the States have narrowly decided to officially take People’s Park off the table once more as a potential site for the new hospital.

If the island's politicians agree to rescind a previous decision to build it around the current site, then the list of alternatives is rapidly getting smaller, now the Constable of St. Helier has won his bid to remove the People’s Park and other parks in his Parish, including Lower Park, Victoria Park, Westmount Gardens or Parade Gardens.

24 Members voted in favour of Constable Crowcroft's proposal, and 22 against – there were no abstentions.

The Constable had previously fought the development of the hospital at People's Park in 2016, and now he has won over the States Assembly in his efforts to protect his Parish's green spaces.

Pictured: Constable Simon Crowcroft has won a States' majority in his fight to protect People's Park from development into the island's Future Hospital.

In a report outlining his proposal, the Constable says that there is already a shortage of green space in space - a situation he says he has tried to remedy by fighting the loss of space in Springfield Park and attempting to extend Millennium Town Park.

He wrote that, given the States policy to "concentrate new housing developments in St. Helier", the town needs "to conserve the amenity space and parkland that it has, and to increase provision, if the future residents of the town are not to be short-changed when it comes to amenity space, with all of the social consequences that go with town cramming."

The debate saw 24 Members address the Assembly outlining their views on the matter. Amongst these were Health Minister Richard Renouf who expressed concern that clinicians and hospital staff should be listened to regarding the prospect of building on People’s Park.

He said: “We’ve not heard the clinicians over People’s Park… we need to bring them in and seek out their views… their views should be heard.”

In the Hospital Policy Development Board report published last year, a ballot of 714 hospital staff – only 22% of all employees – identified People’s Park as the most popular site for the new health estate.

Pictured: Concerns were raised in the Assembly that hospital staff were not being listened to when it came to their preferred site.

Other Members, including Constable Chris Taylor and Minister for Infrastructure Deputy Kevin Lewis argued that now is not the time to be taking any of the sites off the table. Constable Taylor, who has previously declared his preference of building at Overdale, as Express exclusively revealed earlier this year, told the Assembly: “I want to see sites selected on the evidence and sites removed on the evidence, not on a political debate in this forum.”

Those speaking in favour of the St. Helier Constable’s amendment included Minister for Housing and Children Senator Sam Mézec and Deputies Scott Wickenden and Steve Luce.

Deputy Rob Ward also rallied behind his Constable’s amendment, saying that developing on any of the Parish’s parks would signify “yet another burden on St Helier, yet another loss.”

Expressing his support for the Constable, Deputy Kirsten Morel said: “People's Park is not viable because it is not a site; People’s Park is a protected space… London would not give up Hyde Park, New York would not give up Central Park… because they are vital.”

Deputy Morel also brought his own amendment which suggested that the site selection process start from scratch, balancing each location on its merits, rather than taking previous political decisions into account. This amendment was also adopted by the Assembly, with 35 Members voting in favour and four against.