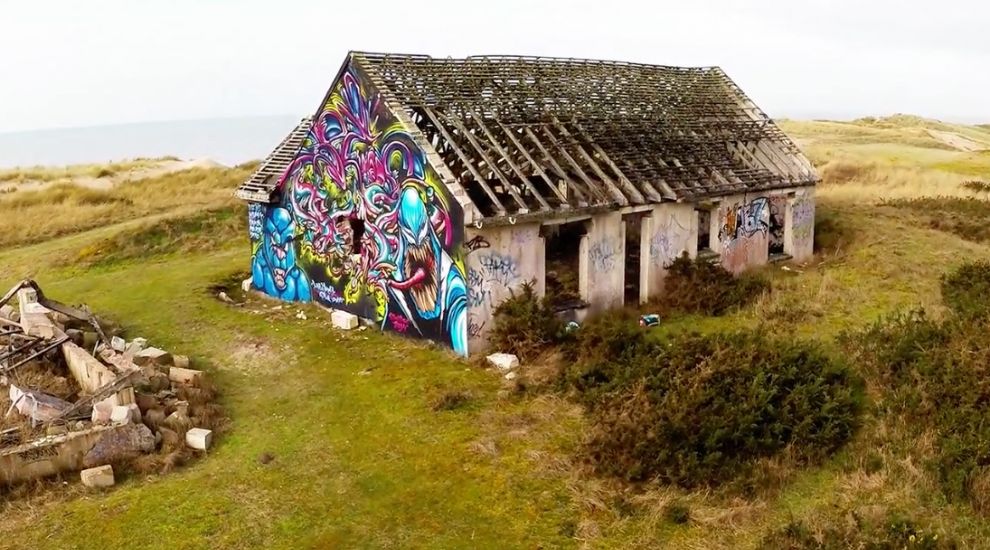 On a clear day, it’s not uncommon to look out across the Island’s east coast to our Norman neighbours in the French village of Pirou. But it might surprise islanders to know that the neighbours aren’t home – and haven’t been in for over a quarter of a century.

Dubbed “le village fantôme” (“ghost town”), Pirou – a village directly adjacent to Jersey, which lies between Cherbourg and Granville – was formerly home to around 30 homes, but zero residents.

In 1990, property developer Pier Invest had tempted investors and potential buyers with tales of an idyllic new holiday home-style development.

‘Aquatour’ – so-called due to its unique coastal location directly on the sand dunes – was to offer 80 stylish properties, complimented by a luxury hotel with a pool, two tennis courts, and, as a crucial selling point, would offer views across to Jersey.

Pictured: The idyllic landscape, which offers a clear view of the Jersey coast on a clear day. (Screenshot: Bailiwick Express/Macareux Productions)

It was allegedly a “godsend” for local labourers, who, at the time, were feeling the full force of a construction sector crisis.

Once planning permission was granted, development progressed rapidly, with 30 houses erected in record time. But works were abruptly halted upon realisation that proper site preparation and evaluation had not been carried out.

The houses, it turned out, would not have access to public roads, electricity, or even running water.

Caisse d’Epargne – a bank supplying investment – snappily withdrew funding, provoking the collapse of several local businesses and, eventually, of the whole project in 1992.

“Many houses were completed, but were useless, as they hadn’t been properly prepared,” Noël Augrandjean, Mayor of Pirou 2008-2014, told Le Monde*. “Invest Pier gave a piece of the land as compensation to the damaged businesses. It took a long time for the town to buy it back.”

And so the once utopian Aquatour gave way to the “village fantôme” for 26 years, only frequented by local graffiti artists or accidental tourists – until now.

Having piqued the wider public’s interest through a spate of drone footage videos of the site, the forgotten site once again became a hot topic for the local council.

They’ve since decided to demolish the site, with the first Siporex houses taken down in December. Next will be some of the asbestos-filled remaining builds, before the hotel is finally dismantled. Works are expected to be finished by March.

According to current Mayor Noëlle Leforestier, they’re now working on a replacement attraction for the Jersey-facing beauty spot.

“We will work with respect for the dunes and the coast. We want the project to be touristic, economical, and to integrate ecologically,” she said*.

Jersey may be soon to get a new, more social, neighbour.