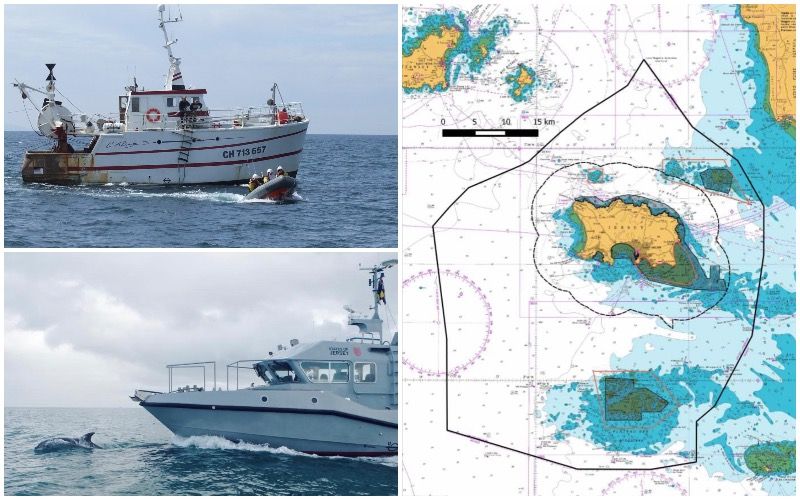 The Government is to communicate its frustration and disappointment to France and the EU after a large fleet of French dredgers swept through local scallop grounds last night.

Environment Minister John Young said that these boats were “breaking the spirit” of an amnesty, which Jersey introduced to give the French time to adjust to the terms of the UK-EU trade deal, which was introduced on 1 January.

Last night, 14 French scallop dredges clustered over fertile grounds around 6 to 12 miles to the west of the island.

13 of the 14 had licences under the old agreement – which Jersey felt strongly favoured the French - but only six of them had the necessary track record to fish under the new UK-EU trade deal, which requires boats to demonstrate a history of operating around the island.

Pictured: Deputy John Young: "We need the goodwill of the amnesty to be reciprocated"

For this reason, Deputy Young believes that the French are not playing fair.

“This activity is breaking the spirit of the amnesty. This area won’t take this for much longer and, if it goes on, we will have to close the area off for years.

“The whole intention of the amnesty was to ensure that French boats which historically fished in the area could carry on while they compiled evidence necessary to apply for a licence.

“These boats are taking advantage of it.”

Deputy Young said he had asked External Relations Minister Ian Gorst to make an official representation to the French and EU to get these boats to stop.

“They cannot carry on like this. We need the goodwill of the amnesty to be reciprocated and for fishermen who don’t have a track record to respect its terms and show a sense of fair play.

“I have no interest in seeing these areas fished out. If the situation continues, then I’m afraid a ban will be necessary once we take back control, from 1 May for these types of vessels.

“I am feeling very disappointed. I don’t want to inflame the situation because no one wants a fishing war, but we need to see a reasonable level of respect.”

The boats were tracked last night by Fisheries Officers, who were at sea today to police the area.

Don Thompson, president of the Jersey Fishermen’s Association, said that Deputy Young had the authority to act now by closing areas to fishing.

“This destruction didn’t start last night, it started a month ago when French dredgers completely wiped out an area south of the Minquiers," he said.

“We believe that Jersey could have introduced sustainability measures from 1 January using something called ‘precautionary principles’ which have been used extensively since the Common Fisheries Policy was introduced as a way to sustain fish stocks.

“It allows an authority to close down an area to assess what damage has been done and then allow it to recover."

He went on to claim that "illegal and unauthorised boats" have been entering Jersey's waters, adding: "These are boats that have never been seen before, coming down from the Baie de Seine and other areas, fishing day and night.

“I appreciate Deputy Young’s intention to respond through diplomatic channels, but we need more than a stiff letter sent to Paris and Brussels; the local fleet is prepared to see an area closed down until we see what damage has been done and how it can be repaired.

“Deputy Young and Senator Gorst appear to be extremely concerned about doing anything that might upset the French, but their own boats face strict controls in French waters. They have open and closed seasons, and weight and time limits; I don’t think introducing similar measures in Jersey would be that upsetting to them.

“It is the like the Wild West at the moment and it has to stop.”

Posted by SimonBevens28 on Apr 10th, 2021
Our politicians are full of blow and bluster about being 'World Class' and in charge of our own destiny.
The reality is that they have left us begging for scraps at the EU table and are weak and ineffectual.
For all the money spent on bravado and foreign jollies, they can't negotiate as they don't have any influence or ability. The French burn tyres and get what they want if EU policies don't sit well, never mind the 'sprit of the agreement' - that is never going to work.
Posted by IanSmith97 on Apr 10th, 2021
Is anybody really surprised? Just look at their behaviour post Brexit. They catch shellfish in our waters and take it to France and land as is. We catch shellfish in our waters and they refuse to let it into France as is. The one thing you have to understand is the EU exists for the benefit of France, her farmers and her fishermen.
To place a comment please login Login »

Fishermen’s fury at extension of amnesty for French boats