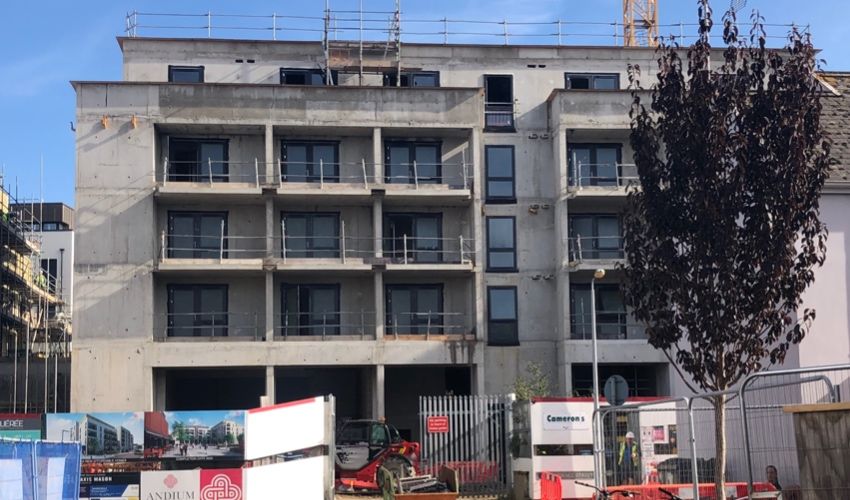 Developers constructing five or more homes will have to make sure there is a density of at least 50 ‘dwellings per hectare’, which could involve building up as well as out, under new Government plans.

The aim of the new 'minimum density levels' policy is to make the best use of land, given the island's housing challenges.

By way of comparison, Langtry Gardens opposite Grainville Playing Fields has a density of 50 dph.

For Les Quennevais, the minimum density will be 40 dph while for smaller centres of development around the parishes, the minimum standard will be 30 dph.

The draft policy adds that proposals for new residential development in the built-up area will not be supported where the density is above 350 dph or dwelling exceed 279 sqm, or 3,000 sq ft of internal floor area.

By way of context, the Westmount development near the People’s Park has 230 dph.

The Government has published draft planning guidance which, if adopted, will supplement the policies of the Bridging Island Plan, which establishes the rules of what can be built where.

Pictured: An illustration used as part of the supplementary guidance to show how the same density of housing can be spread in different ways.

The proposal states: “Jersey’s success in attracting people creates a tremendous challenge for the provision of additional homes and infrastructure.

“As the island changes and grows, there is a need to ensure the best and most efficient use of its limited land supply and there is an inevitable pressure to increase development densities.

“There are ways of creating more and better homes in Jersey on previously developed land and at taller, but moderate height, before having to resort to high-rise development or the further release of greenfield land.

“It is possible to create successful places with higher density development within existing neighbourhoods based around streets with a variety of urban forms, including houses and carefully integrated taller buildings: in St Helier these might take the form of medium-tall (4.5-6 storey) and taller (6-8 storeys) apartment blocks.

“It is a common misconception that high density requires high-rise and precludes more familiar patterns of living.

“Tall buildings are not necessarily an efficient use of land: the same built volume can be delivered in radically different forms: as the diagram below demonstrates, the perimeter block, with spacious courtyard, provides the same floor-space as the tall tower. 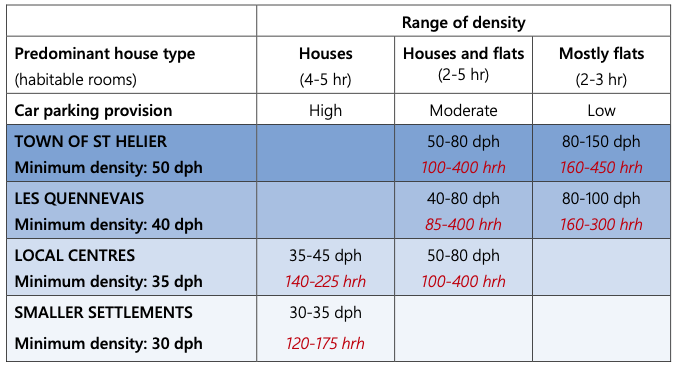 Pictured: An indicative range of density which the supplementary guide says might be appropriate and delivered in different parts of the island’s built-up area. This is expressed as the number of homes (dph) and habitable rooms (hrh).

“This can help deliver the best and most efficient use of previously developed and urban land.”

The policy development fits in with a desire by the new Government, as part of its post-election ‘100 Day Plan’ to provide more home for more people.

Those wishing to have their say on the proposals can do so here.

Posted by Scott Mills on Oct 20th, 2022
Only suitable for slim people!
Posted by Jon Jon on Oct 20th, 2022
So smaller than the rabbit hutches built now, maybe hamster size!
Posted by Keith Marsh on Oct 21st, 2022
Now we are going to build slums in St Helier, that are so small special sized furniture has to be ordered, as parts of London. These will need total renovation within 20 years and totally replaced in 50. ~ What a waste of money.
To place a comment please login Login »