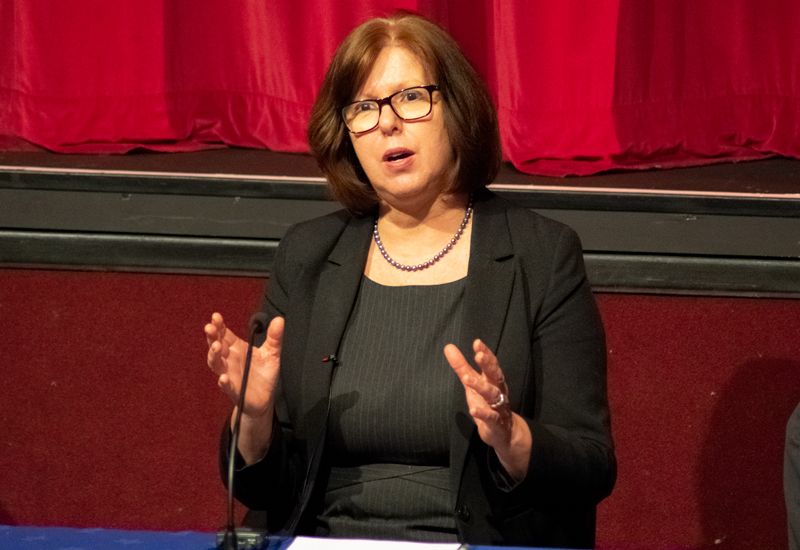 Guernsey’s top pandemic medic has admitted she’s had several job offers since the virus crisis began – but says she isn’t planning to leave the island any time soon.

Director of Public Health Dr Nicola Brink MBE said the support she, her family and the island's wider Public Health team had received from the Guernsey community throughout the pandemic means everything to her.

However, there had been speculation that she was planning to depart the Bailiwick, which her family has made its home since 2003.

Responding on Twitter, the Public Health Director said she was aware of "a number of rumours" circulating, but that they "are absolutely not true".

Speaking further on the subject to Express, she said: "It is inevitable from time to time that you do get approached by other organisations. But 100%, I love living in Guernsey and I love my job. The support we have had from the community has been fantastic. Why would I want to leave?"

Pictured: Dr Brink has become one of Guernsey's most recognisable public servants in the last 18 months.

Dr Brink revealed that approaches regarding jobs have been made to her "throughout the course of the pandemic", but maintained that she has no plans to leave the Bailiwick.

Born and educated in South Africa, Dr Brink was presenting research about HIV and Aids at an international conference in Berlin in 1990 when she was approached by the Professor of Virology at University College Hospital.

He was so impressed with her work that a joint clinical and senior lecturer position was carved out just for her at the London-based hospital.

Dr Brink spent 13 years at the teaching hospital before moving to Guernsey with her husband in 2003 to take up a position in the local clinical HIV and hepatology service.

Since taking up that post, her team has been working on programmes to eradicate Hepatitis-C and cervical cancer in Guernsey, with the introduction of free cervical screening one of the measures taken to help accelerate that process.

However, the arrival of the pandemic saw her end up guiding the island's approach to dealing with covid-19. In the end, Guernsey took a separate course of action from Jersey, pursuing an elimination strategy rather than a suppression one. The differing strategies was one of the reasons why Guernsey refused to form an air bridge with Jersey last year.

It emerged in meeting minutes released last year showed that Jersey's Scientific and Technical Advisory Cell agreed in April 2020 "that the advice from Guernsey public health specifically was not needed” - in contrast to previous strategies drawn up for handling pandemic influenza, which had advocated an inter-island approach.

It was subsequently decided that Dr Brink should be removed from their Terms of Reference.

When covid-19 hit, updates to the joint Channel Islands strategy for dealing with pandemics were not yet complete.

In response to a recent report about its handling of the pandemic, Jersey's Government said last week: "...There is commitment to completing the revised Channel Islands Pandemic Strategy as soon as practicable possible.

"However, this requires each jurisdiction (Jersey and Guernsey) in the coming months to consider their response to the pandemic, recognising the different strategies of suppress and elimination that were adopted. This will include lessons learnt, the management of risk and solutions implemented to identify good practice which will inform strategic planning in the future.

"This will include what learning is available in both the local and wider contexts."

Women, you DO have the authority!