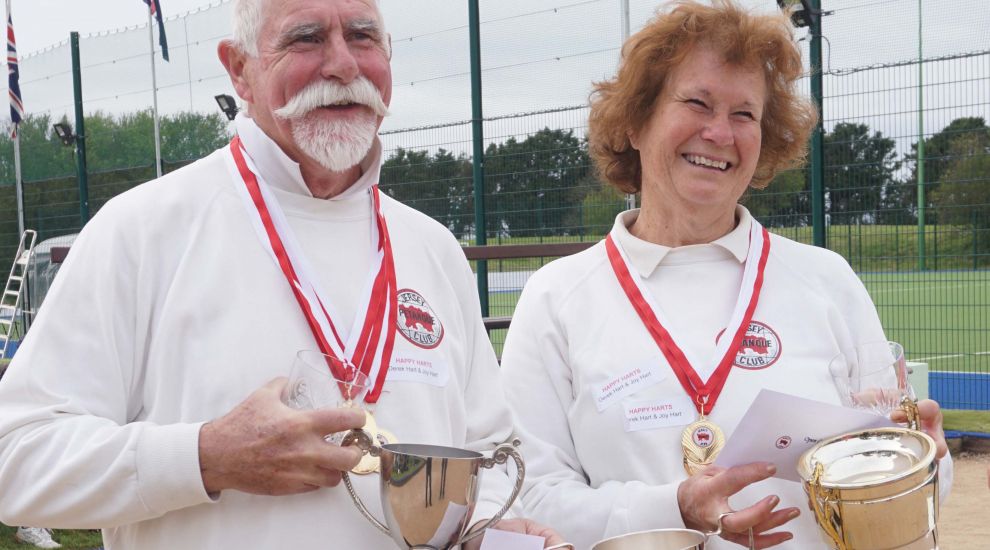 They called themselves the Happy Harts … and they couldn’t have been more chuffed when they triumphed at the Jersey Pétanque Club Open Doubles competition last Sunday.

Derek Hart said he and his wife Joy had been taking part in the tournament over the best part of three decades and never come close to winning.

They picked up three trophies in total; for winning the competition, for being the best Channel Island team and as the home club’s highest placed representatives.

The Harts won the title in some style against their opponents Tony Morton and Brian Corbel in the final. Having been behind two-nil the Carrefour Pétanqe Club pairing went 3-2 in front only to be pegged back by five points on the next end. Although the Carrefour duo picked up another point the Harts had another high scoring end to go 11-4 in front.  Derek Hart then scored a carreau, the pétanque equivalent of a six hit out of the ground in cricket, and his wife mopped up the remaining two points needed for the victory.

The event attracted some 70 pairs including teams from Guernsey, France, England, Wales and Scotland. It was the first time since 2012 that a team from the home club had won the competition. In their semi-final the Harts removed last year’s beaten finalists, Nick and Shirley Henry from the Isle of Wight with a 13-11 scoreline; while Tony Morton and Brian Corbel beat another  Jersey pair, Chris and Jake Romeril,  in their semi-final, 13-5.

In the Plate competition for the highest-scoring losers in the qualifying round there was an all-Jersey clash involving the title holders, Andrew Bellamy-Burt and Callum Stewart of the Liberation Pétanque Club who lost 13-8 to Neil Selby and Keith Boleat from the Carrefour Petanque Club.