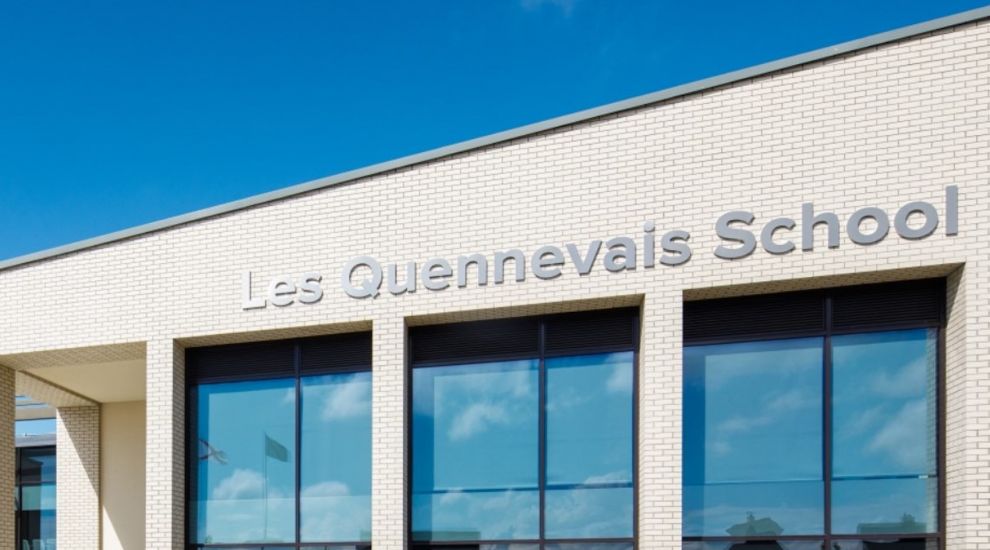 A £40m school which opened just two years ago is being forced to close this afternoon as temperatures soar past 30 degrees because its windows cannot be opened and most of the building is not air conditioned.

It's expected that the closure of Les Quennevais, where students are already being permitted to wear PE kits instead of uniform to keep cool, could be the first of several this week.

Breaking the news that students would have to be collected at 13:10 in a letter to parents and guardians yesterday, Headteacher Sarah Hague explained: "...When the external temperatures are high, internally our building currently experiences temperatures which are difficult to manage and present significant risks.

"We have spent today assessing these risks and how we can mitigate against them, but by the afternoon conditions will be very difficult for students and staff.

"This is not an easy decision to make, but I feel we have no option."

As LibertyBus is unable to provide an early bus service, parents will need to make arrangements for their children to get home early.

Ms Hague added that Sports Day and the Whole School Awards Ceremony were being moved to Thursday and Friday morning "in anticipation of further afternoon closures, which we will monitor closely." 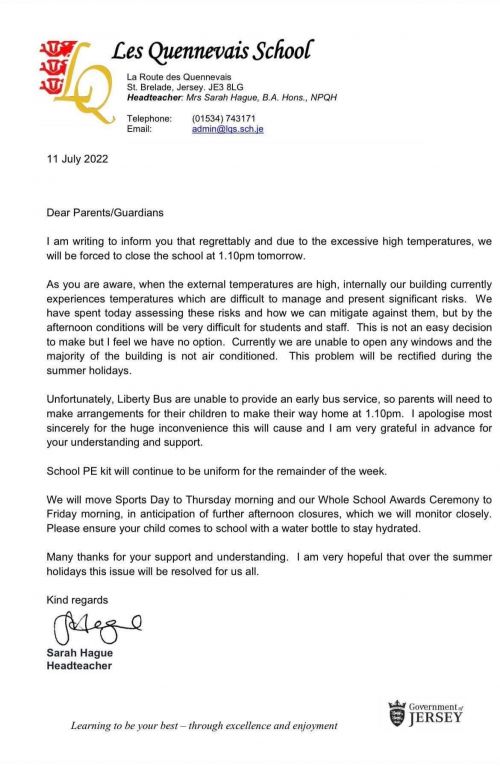 It's not the first time Les Quennevais has been forced to take action due to extreme heat.

JPH was expected to address the issue before summer, but Ms Hague said in yesterday's letter that the problem was expected to be "rectified during the summer holidays." Express has asked the Government for an explanation and is awaiting a response.

Temperatures are expected to reach 32 degrees today, and 35 by Sunday. The previous highest recorded temperature in Jersey was 36.

The continuing high temperatures could also see the island enter a meteorological absolute drought - a period of 15 or more consecutive days when no measurable rainfall.

Public Health has warned that older people, children and people with chronic conditions are particularly at risk from heat exhaustion, heatstroke and dehydration, and has issued the following advice for keeping cool:

Head of Meteorology at Jersey Met, Paul Aked, said; "We are expecting very hot and dry weather over the coming week, and we are working with colleagues from across Government to make sure we support those planning ahead and we would encourage everyone to keep up to date with our forecasts."

"Often, we focus on the daytime temperatures, but it is at night that we get an opportunity to recover from a hot day. With night-time temperatures forecast to be so high we are not able to do so easily. It's important to think about how we cope with extreme heat, how we keep ourselves and those around us, including pets, and our houses cool. We should consider the activities we do, or perhaps don't do, during this period of hot weather."

Posted by IanSmith97 on Jul 12th, 2022
In the name of goodness, how can we spend £40m on a school in the sunniest place in the British Isles and dooooh, no air con? Whose head will roll for this?
I think we know the answer to that.
Posted by Sheila Young on Jul 12th, 2022
This beggars belief, whoever is responsible should be sacked. A new multi million pound school with windows that don't open and no air conditioning. Yet another triumph for Jersey planners!
Posted by anthony turmel on Jul 12th, 2022
and how many cowboys from the ranch did it take to build this...!
Posted by Keith Marsh on Jul 12th, 2022
It is truly unbelievable, we can spend £ 40,000,000 on a school .... with no decent air conditioning. Who was the Architect ? ~ Who signed off on the drawings for the States ?
Who agreed Building Regs' for Planning ?
This is a disgrace.
Posted by Private Individual on Jul 12th, 2022
Another monumental cock up that the taxpayer has to pay for. Whoever designed the building should be struck off as an architect.
Posted by Jon Jon on Jul 12th, 2022
Sack all those responsible for building that school, again no one fit at Jersey Property Holdings,they were in charge of building it and no one saw this problem? Heads should rolls new 40 million pound school unfit for purpose!
Posted by Scott Mills on Jul 12th, 2022
ps.What happens if there's a fire, blocking the exit from the classroom into the hall. No windows. That's clever. Honestly Jersey the global leader in messing every single thing wrong from the off, and I can't wait to get off this rock.
Posted by Sheila Young on Jul 13th, 2022
What a pity that during the current heatwave that neither the water features in Coronation Park nor Millenium Park are working, more tales of woe from the States!
Posted by John Sheen on Jul 13th, 2022
I can’t believe people are blaming the builders - they really don’t understand that the builders follow the approved plans.

Therefore, the former Education Minister Rod Bryans, and his support team, who can often be seen at the school during various celebrations and lapping up the praise for their ‘speedy work’, have a lot to answer for. Ultimately it was them who were accountable.
Posted by Jack Pollock on Jul 13th, 2022
Terminology of professional negligence springs to mind
To place a comment please login Login »