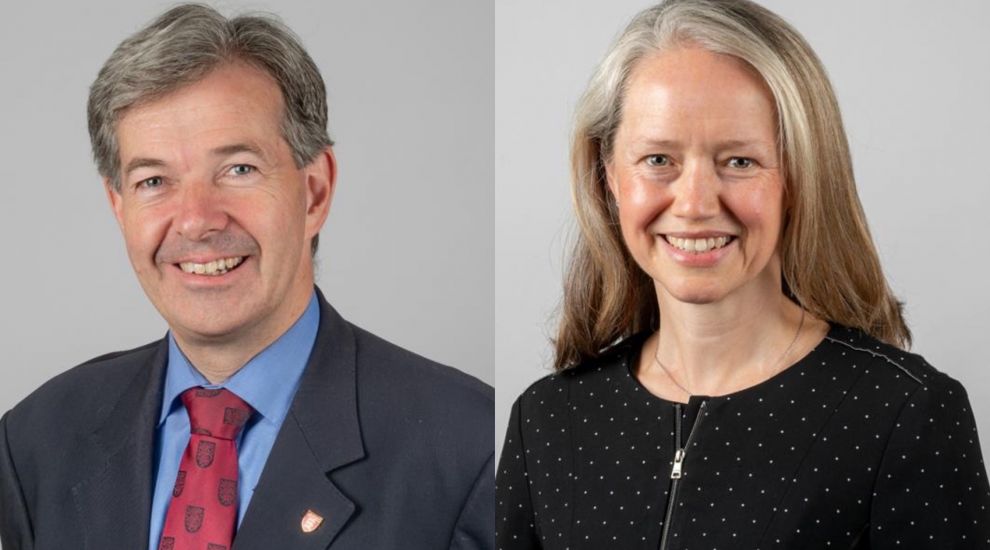 The ability to hold the Chief Minister and Government CEO to account has broken down amid accusations of “making things personal” or “playing politics”, “shouting”, and even the pulling of faces or use of “disrespectful” gestures, the Chief Scrutineer has claimed.

In a scathing letter to the States' behaviour watchdog, Senator Kristina Moore accuses Senator John Le Fondré of shielding former Chief Executive Charlie Parker from criticism as a way of defending his own political career.

She had been accused of making comments about Mr Parker that could “undermine public confidence” in the States Assembly during a TV interview in which she stated that she was initially optimistic about Mr Parker’s appointment, but now found herself “pleased” he was going. 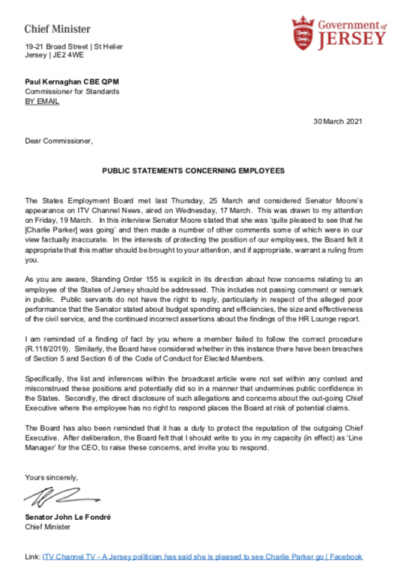 CLICK TO ENLARGE: The Chief Minister's letter of complaint.

Senator Le Fondré therefore referred the matter to the Commissioner for Standards as a potential breach of the States Members’ Code of Conduct, but Commissioner Paul Kernaghan found last month that Senator Moore had expressed herself “in measured terms” that were not “overly personal or prejudicial”.

Correspondence relating to that complaint has been made public for the first time this week – including Senator Le Fondré’s original complaint, and Senator Moore’s detailed 22-page rebuttal.

In it, she firstly criticises the Chief Minister for failing to follow “normal” practice with his complaint “for reasons that are not wholly clear to me” – raising it “out of the blue” with the Commissioner, rather than taking it up with her first.

His letter, Senator Moore points out, also fails to state exactly which comments of hers merited the complaint, leaving her “in the somewhat invidious position (when providing this response) of speculating as to how and why the Chief Minister thinks that my comments breach” the States Code.

She later speculates that perhaps the Chief Minister would have preferred she refer her concerns about Mr Parker – namely, her view that he had failed to deliver the “smaller and more nimble” civil service as promised, and how “tens of millions of pounds” were spent rather than saved throughout his leadership – with him directly.

However, Senator Moore, who previously brought a vote of no confidence against the Chief Minister over the Parker saga, explains that this would have likely resulted in a decision to reject or refusal to progress the complaint or an accusation that she was “playing political games” or “seeking to pursue a political agenda against him.”

She described the latter as a “recurrent Government tactic”, adding: “It is an unpleasant and ante-democratic tool by which senior members of the Government are trying to devalue the work of Scrutiny (including the dedicated civil servants which support this heavy workload), in order that they may (a) say that the views of Scrutiny may be disregarded as unhelpful and irrelevant and theirs preferred and (b) deflect any criticism (including constructive criticism) of decisions taken or positions adopted by the Government.

“It is also a tool by which they are trying to blunt the work of Scrutiny; the aim is to make members of Scrutiny hesitate before adopting positions and expressing views that are either (a) critical or in contradiction of decisions taken or positions adopted by the Government or (b) which they would previously have unhesitatingly expressed. Put more generally, it is a tactic which seeks to airbrush out opposed views.”

The suggestion Senator Moore had made things “personal” was advanced by the Chief Minister during an apparently heated virtual meeting last April, according to Senator Moore.

“…He started aggressively shouting at another States Member and I. He accused us of making things “personal”, which was not the case. The incident was witnessed by others, including Mr. Parker and various civil servants (one of whom later described it as “a meeting like no other”). After the meeting, the Chief Minister provided something of an apology and we sought to remedy matters by bringing the whole Scrutiny Liaison Committee to a meeting the following day and subsequent meetings. We also gave the Chief Minister the benefit of the doubt due to the pressure of the COVID situation, although I have considered reporting this incident to you but (after consultation with another States Member) concluded that I would be accused by the Chief Minister of “playing politics” if I took that step.”

Her concerns about Mr Parker, she said, had in any case already been referred to the CEO’s independent assessor – Dr John Nicholson, who, as Express previously reported, had worked with him before – but were not reflected in his final report.

Further evidencing why she felt the Chief Minister would not adequately respond to her concerns, she referred the Commissioner to praise of Mr Parker by Senator Le Fondré after it emerged he had breached his contract and approved an erroneous statement about his second job.

Such incidents weren’t the only way in which Scrutiny had been undermined.

This also apparently manifested itself in the Chief Minister, who sits behind her in the States Assembly, sometimes “pulling faces and making gestures when I speak in the Assembly”.

“These actions (which I cannot see but which are variously unprofessional, discourteous, disrespectful and inappropriate) have been noticed by people who watch the Assembly online and can see the Chief Minister when I am speaking and who have commented to me on the inappropriate nature of his behaviour.”

Pictured: Senator Moore said Senator Le Fondré had been seen pulling faces behind her in the States Assembly.

Despite Mr Parker’s departure, Senator Moore suggested that hurdles were put in the way of analysing his successor’s activities.

Elsewhere, she critiqued the behaviour of Mr Parker to justify her comments, noting the responses to the Government’s Be Heard survey and HR Lounge report. She also noted: “I am also aware from my discussions with others that various individuals, including a retired senior politician (who may be willing to discuss his experience with you, if required) that their dealings with Mr. Parker were unpleasant.”

Towards the end of her rebuttal, Senator Moore stated: “No civil servant, States Member (including members of any Scrutiny panel and me) should be forced to work in an environment where bullying and other inappropriate behaviour forms part of the culture, including at very senior levels. (My own experience is that the working environment is at times (and particularly when dealing with the contentious issues with the members of Government, including the Chief Minister) unpleasant.

“The public expression of such personal views and opinions by a politician is, in reality, likely to strengthen the “public’s trust and confidence in the integrity of the States of Jersey”, including by ensuring that difficult and unpleasant issues are ventilated and members of Government are being held to account.”

Posted by Virginia Moss on Jun 15th, 2021
My sympathies lie with Senator Kristina Moore, to put up with bullying and childish behaviour is totally unacceptable in our government. Scrutiny has a valuable role to play and needs to be able to hold to account those who would mismanage and run rough shod through principles of integrity and openness.
Posted by Scott Mills on Jun 15th, 2021
We need someone to produce a "spitting image" type program dealing with Jersey politics.
Posted by Jon Jon on Jun 16th, 2021
Scott,we have the real puppets in the States but you can certainly imagine Le Fondre,Farnham,Pinel and Co as Spitting Image Puppets!
To place a comment please login Login »