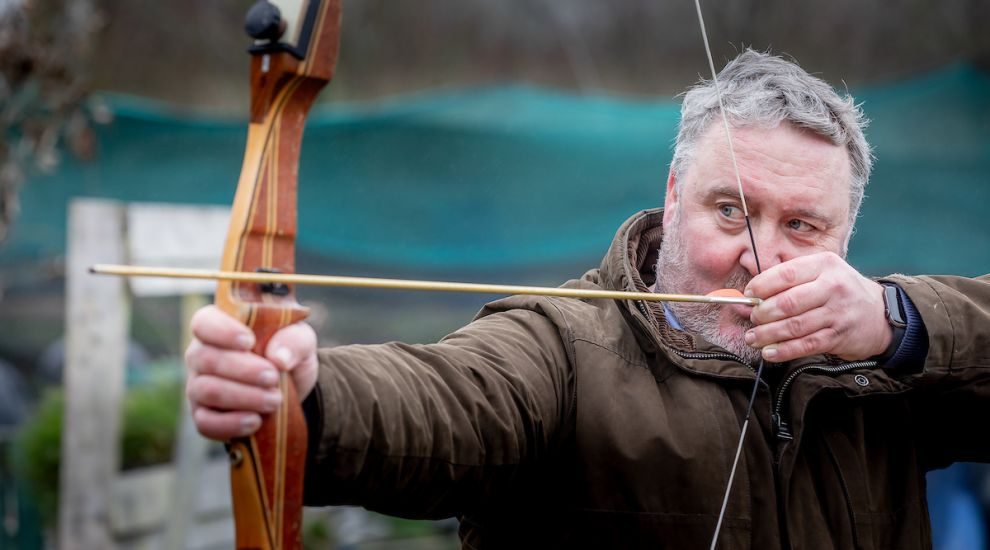 One of the many major challenges for businesses through the pandemic so far has been the simple uncertainty of life; of not knowing what new restrictions will be brought in tomorrow that may, potentially, mean they can’t trade at all. Or that they have to incur more costs just to stay open.

The answer to that for many has been to tread water, to simply keep going and wait for better times.

It’s an understandable reaction, but one which also presents risks. Roger Le Maistre co-owns the Valley Adventure Centre, and also runs Freedom Holidays with his wife - he has always looked to break new ground, from farming to leisure, to tourism and energy.

He told Express how momentum, continually moving forward, was an essential ingredient of success. 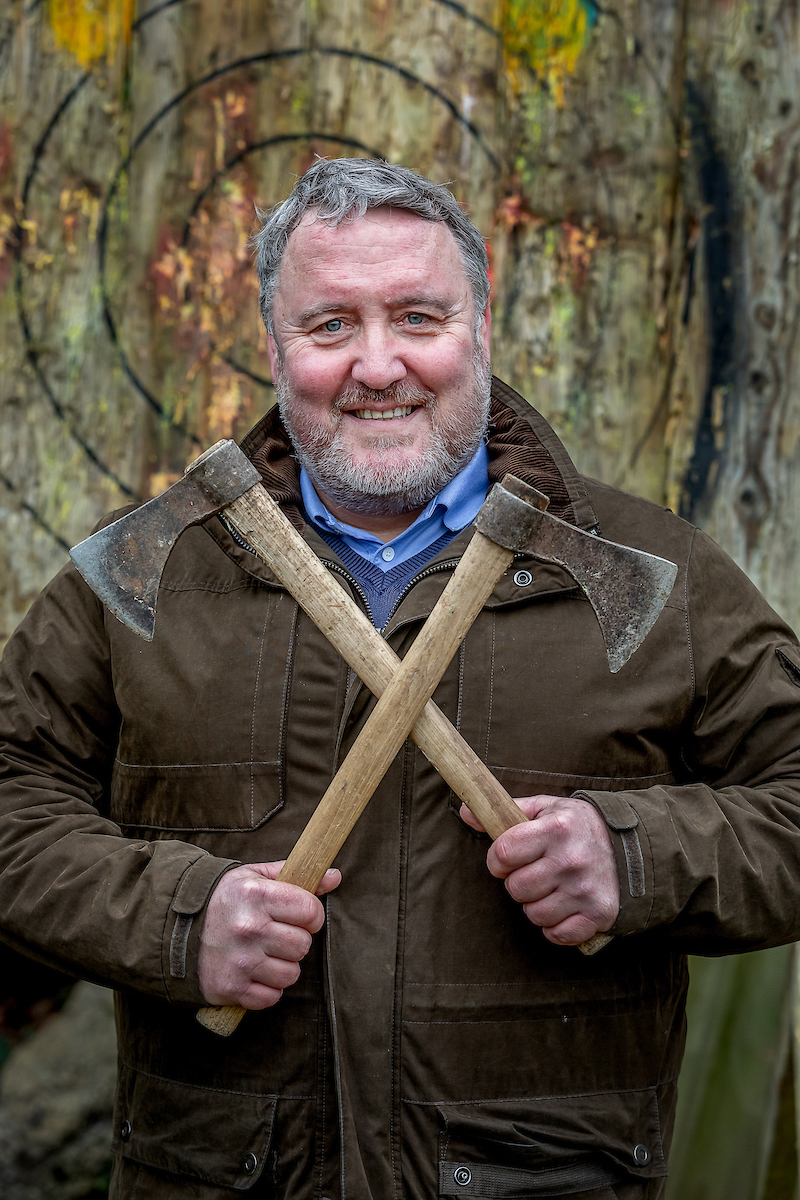 If you follow the pattern of Roger Le Maistre’s working life, it has been about setting up new businesses, helping them grow and then moving them on. Roger will tell you that his approach has given him a broader understanding of various sectors in the economy. He's very much a people person, and an optimist, and that’s perhaps down to his farming background where the family businesses were forever evolving.

He left Victoria College at 16 to do building studies at Highlands from where he got a place at what was then Portsmouth Polytechnic. After working as a professional Quantity Surveyor, he joined Le Maistre Brothers, the family business in Trinity, where they grew potatoes and daffodils and acted as the base for a growers’ cooperative marketing company.

“I got pulled back there, but I didn’t go kicking and screaming. I just felt that Quantity Surveying wasn’t quite my thing at the time. So, I helped set up a big merchant business at the farm.”

Several business ventures later, including an 800-acre daffodil farm in Cornwall and being one of the first to sell hot tubs in Jersey, Roger decided to set up on his own. He opened a coal business which he sold and then set up the horticultural and animal feed business Animal Instincts, owning that until about four years ago.

“I had a call one day from someone I was playing hockey with called Mike James. He said, ‘you know about land and tress being a farming boy,’” Roger recalled. “He had this idea and we joined together and set up the Valley Adventure Centre.” 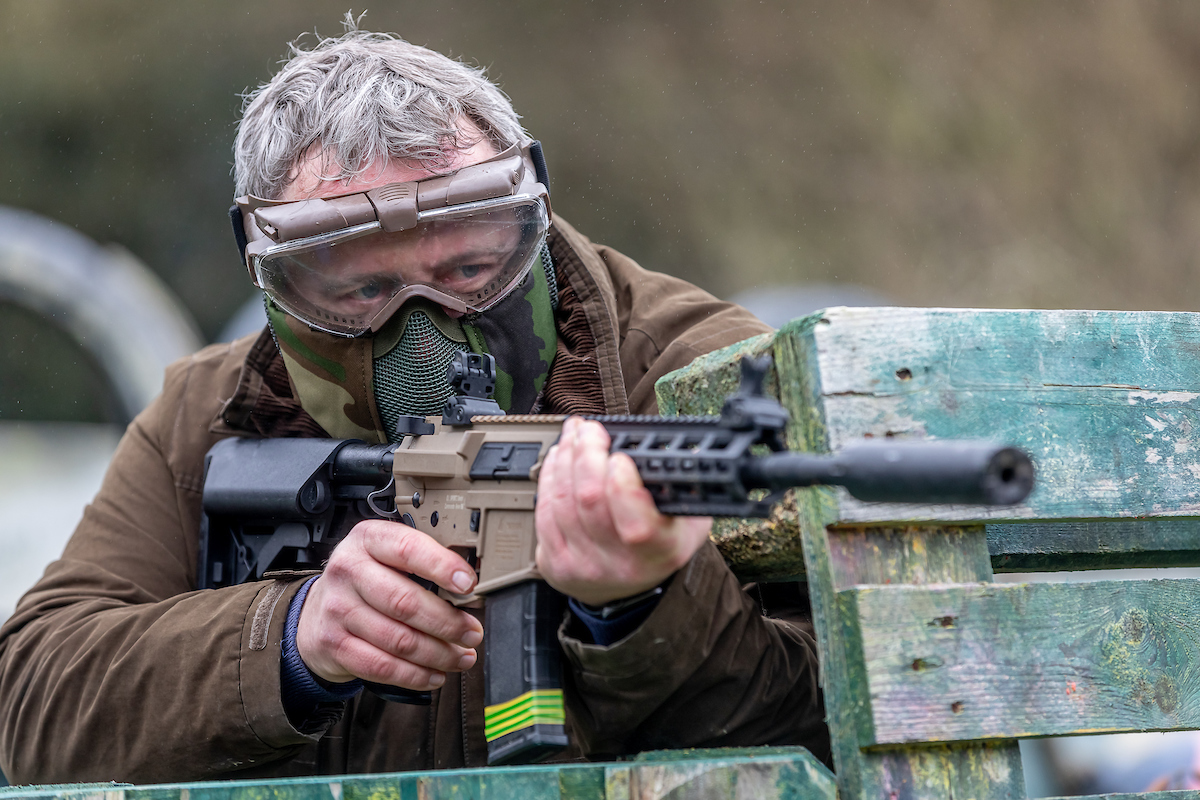 Pictured: Before Les Ormes got in touch saying they had a site, Roger had looked at 16 sites with three getting turned down for planning.

“Mike and I came down here and it was the right place at the right time, and we worked together to build the centre.”

Because they were having problems with planning and the other sites, they had set up a water sports business at West Park, hiring jet skis and boats. They had also won the contract to supply the new castle ducks for Jersey Heritage.

“We had some fun,” he recalls. “Some difficult times but those ducks are still running, and they are absolutely spot on.”

The Valley Adventure Centre isn’t Roger’s only current business. With his wife Melanie, they bought the self-catering accommodation business Freedom Holidays seven years ago, and Roger has also set up another venture, again with an outdoor theme. Roger has patented and trade marked his own mobile power product which does the same as a solar panel but without using glass. His company, Energy and Power Solutions, manufactures the mobile units that are lighter and more robust than glass solar panels.

“I’m working with a company in the US to promote it and we are also working on mobile water supplies too. So that means we are able to go into developing countries and produce clear water using clean power.”

The main applications are for mobile command centres, mobile telecoms systems and mobile water. It’s quite a departure from the activities centre but draws on Roger’s farming experience. 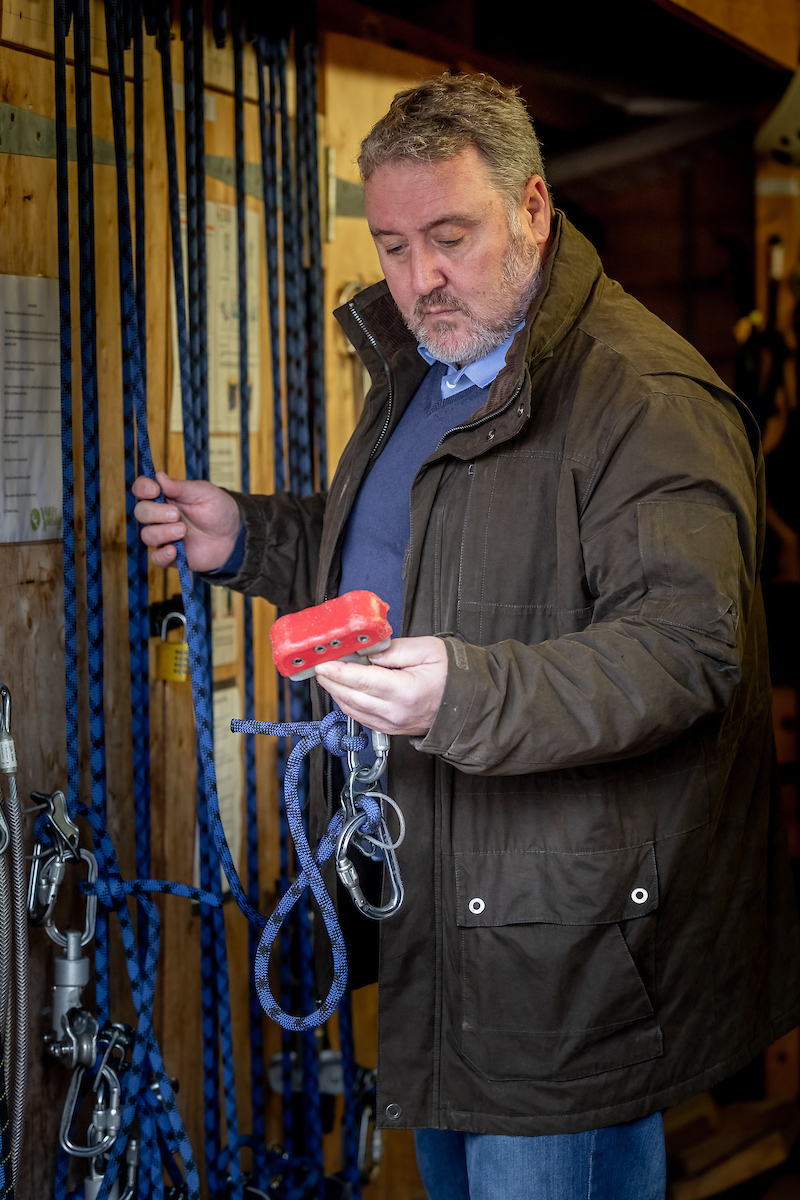 Pictured: “I think the quantity surveying gave me a good background in figures, but I’m quite a practical person anyway. I was driving tractors in fields from the age of seven."

"I got exposed to quite a lot at an early age. I remember the Le Maistre family went over to Guernsey once. We were all under the age of ten and there must have been 15 of us, all Le Maistre cousins. They dug up a field of daffodils that hadn’t been dug for 20 years and the amount of bulbs for us to pick up was just immense. That was our holiday to go to Guernsey and dig a field of daffodils and get paid in jam sandwiches.”

Roger’s first taste for adventurous outdoor activities was aged 11 when he built his own zip wire, or rather, decided to join two ropes together and run them from the tree house, over a lane and into a field, using one of his dad’s tractors to attach the other end to.

“I got to the top of the tree house, put a rope over the top and made two loops and put my arms through. It took about 10 to 15 minutes to pluck up enough courage to jump off. I did it but I hit the knot I had made to join the ropes. I thought it would jump it, but it didn’t, and I fell into the road. It was a 20-foot drop and all I could remember was I hit the floor. My dad saw me drop and came running. I thought I was in trouble because I’d just nicked his tractor without asking.”

Luckily, Roger was unharmed, and his dad built him his first proper zip line, using metal cables and proper pulleys instead of rope. I wondered whether that was what had planted the seed that would eventually lead to the Valley Adventure Centre.

There are plenty of examples of aerial trekking centres around the UK and Europe, but every site is different. The centre in Jersey was one of the first in Europe to use a continuous belay system where participants are attached to a single cable to remain safe at all times. 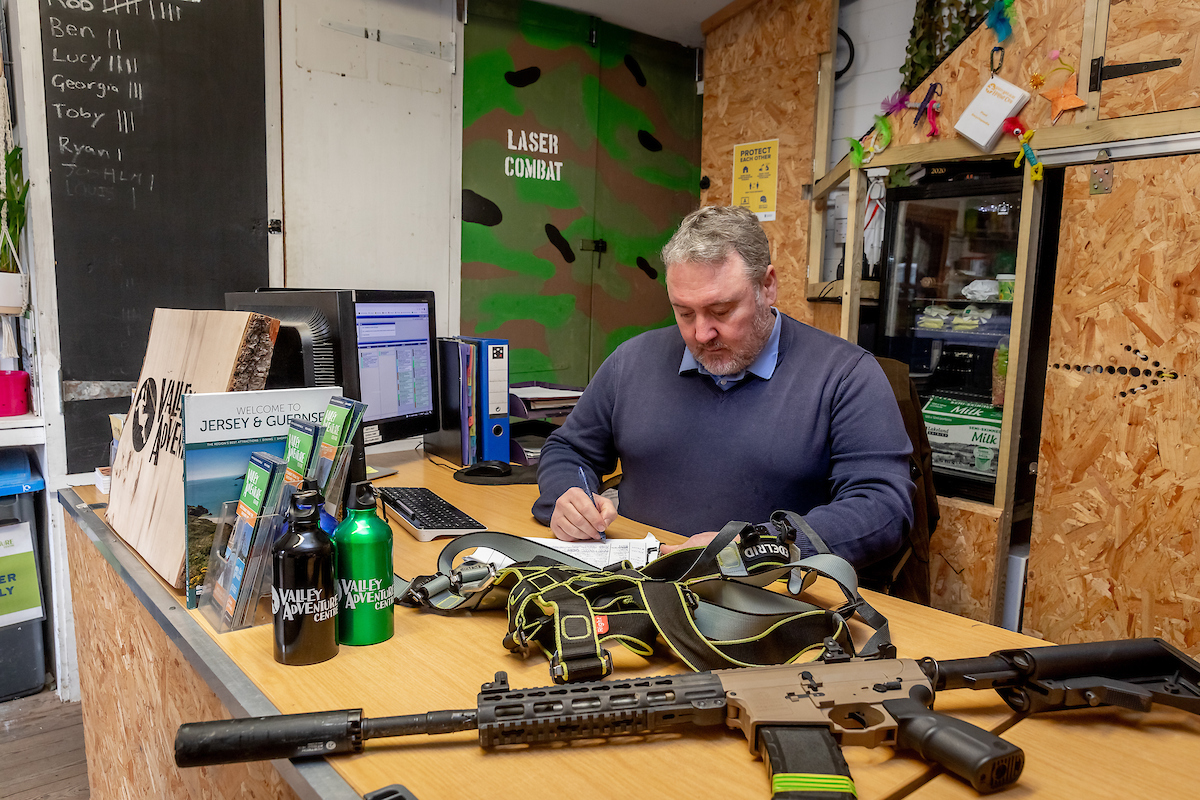 Pictured: “It’s been a long haul, but I love it and I love making people happy,” he says.

One of the most rewarding parts of the job is gently talking people through some of the scarier obstacles on the aerial trekking course, and even the dreaded Powerfan Drop.

“It is the most high adrenaline activity we have at the centre. It does take a mind set to walk off a step like that. It’s 14 metres high but it looks a lot higher when you are up there then it does from the ground. Just look at the treetops and step off.”

That’s good advice for anyone stood nervously looking down past the end of their shoes. When I’ve stood there, I try to think of Patrick Swayze’s character in the film Point Break, shouting out ‘Adios amigos!’ as I plumet rapidly towards the ground.

Among the many visiting groups are those that use the activities to build confidence or team build. Those are often the most rewarding, especially when it’s a youth group such as Earsay, a charity that supports children with hearing impairments who visited to try out the aerial trekking activities.

“We had a girl who was 12 or 13 years old, and she was incredibly nervous, even at the first level. You could see that she was really struggling, but we got her around the whole course. I personally took her around and she was lip reading all the way. You should’ve seen her face at the end. Not only was it relief, but she had just done something she never thought she could do. She had triumphed.”

The centre runs all year and employs 12 people over the winter, growing to 36 during the summer last year. All of those working for Roger are locals and, for obvious reasons, they undergo intensive training. There are not just the high-level activities. There’s archery and the popular axe throwing, plus the combat paint ball and airsoft games have been added and the business has expanded to include the beach with group activities on the sand in St. Brelade’s Bay and on the water with mega SUPs, coasteering and bell boats. 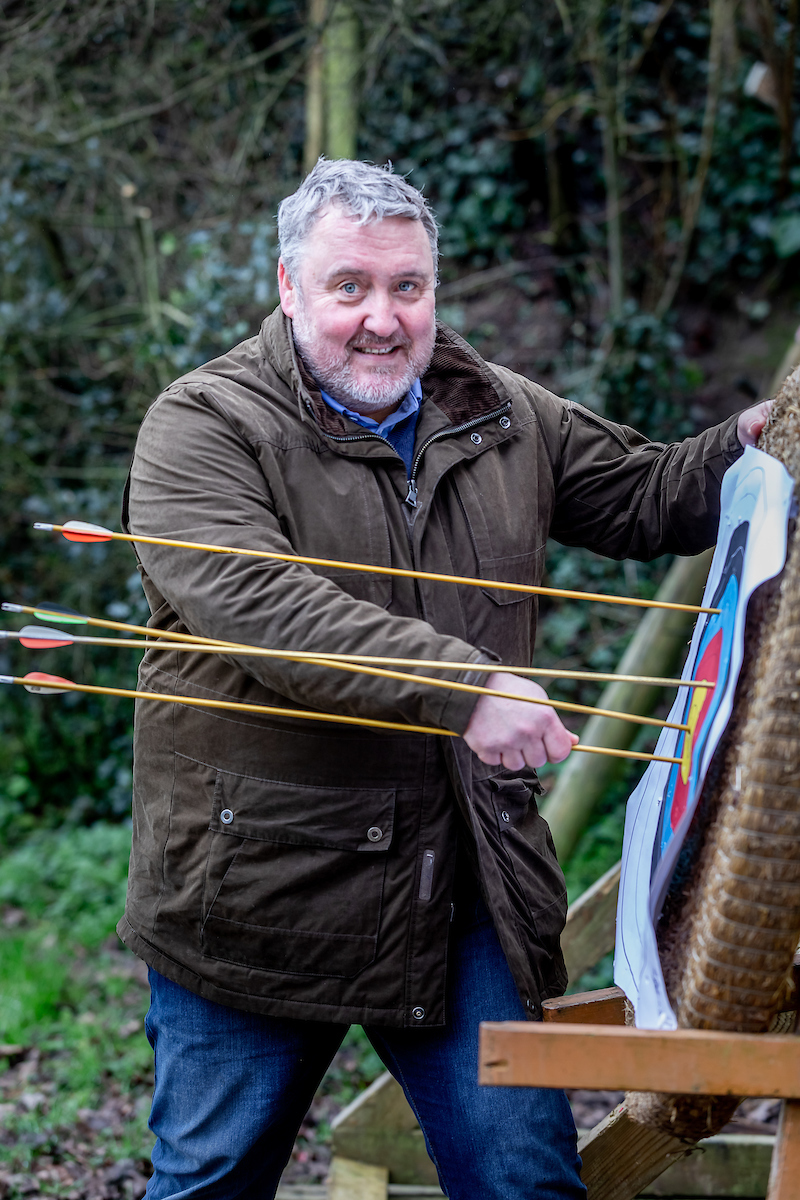 Pictured: As a businesses that relies on visitors, the pandemic has caused some major challenges for Roger and Melanie.

“Covid’s been a double-edged sword for us. Freedom Holidays relies on visitors, and it’s been difficult. We didn’t know where we were in 2020 and last year the entry rules were being changed twice a week. We were having clients wanting to come to the island but not knowing they could come until the day before their arrival date. I have never experienced anything like that in my career. My wife and I were working 80-hour weeks to keep the business going. But because we were flexible, it got easier and a lot of those who came last year are coming again this year. In fact, this year is looking really good.”

The Valley Adventure Centre was closed during the first lockdown in 2020, but when they were able to re-open in the July of that year, there was what Roger describes as a groundswell of people wanting to do outdoor activities.

“A lot of the indoor activities were closed so the demand just grew and continued to grow. The end of 2020 and the whole of last year was the biggest season we have seen by a mile. People wanted to go outdoors, they were rediscovering their island and we were here waiting for them. But it took a lot of work and new procedures that we had to put in. Cleaning harnesses and helmets and then drying them has cost a lot of money because the equipment isn’t designed to be cleaned after every use. We’ve had to replace a lot of equipment well in advance, but it’s given us the confidence to re-invest and that's the thing about business. If you do nothing, you go backwards. You can’t stand still; you have to move forward. That’s what I've tried to bring to all the businesses I have had so that when I move on, they are in a good place.”