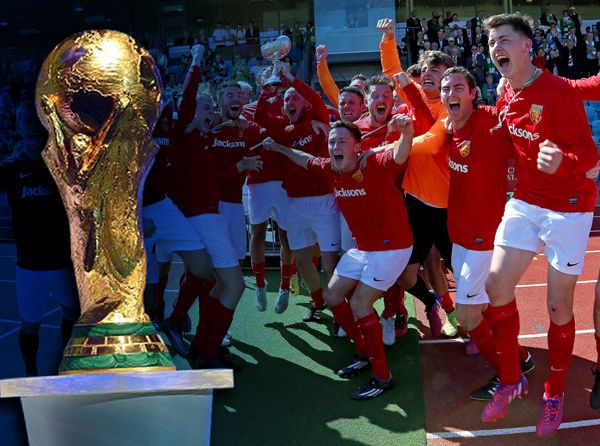 Jersey is a step away from taking on the giants of European football after a delegation filed papers to join UEFA yesterday.

UEFA now say that they’ll be visiting the Island next year.

In August, it was revealed that the Council of Ministers had backed the move to join UEFA – but had told the Jersey Football Association that they wouldn’t be putting any money into the bid.

One of the arguments that has stood in Jersey’s way in the past is that the Island isn’t independent – but the recent admission of Gibraltar into UEFA in 2013 makes the Island’s case stronger.

But Gibraltar’s entry was agreed under a previous set of rules, and it was felt that the new rules wouldn’t allow Jersey in. That was until some industrious States-employed lawyer found a judgment from the German courts that the JFA and now the Council of Ministers feel could tip the scales in Jersey’s favour.

The full minutes of the Council of Ministers meeting in June records the discussion as follows: “The Council was apprised by the Minister for External Relations of a proposal by the Jersey Football Association (JFA) to apply for membership of the Union of European Football Associations (UEFA).

“It was noted that the JFA had sought the support in this matter from the Minister for External Relations because of a UEFA requirement that its members must be recognised as an independent state by the United Nations.

“The Council noted that research work undertaken by the Law Officers’ Department had identified a relevant judgment of the German courts which it was considered would support the JFA’s application. The Council recognised that a number of other small jurisdictions that were not all sovereign states had achieved membership of UEFA and the Council was asked whether it was supportive of the application being made by the JFA.

“The Council agreed that it was supportive of the JFA application, provided that no financial commitment was to be inferred from such expression of support, either in respect of any revenue or capital consequences arising from the application, whether successful or not, at present or at any time within the next five-year period.”