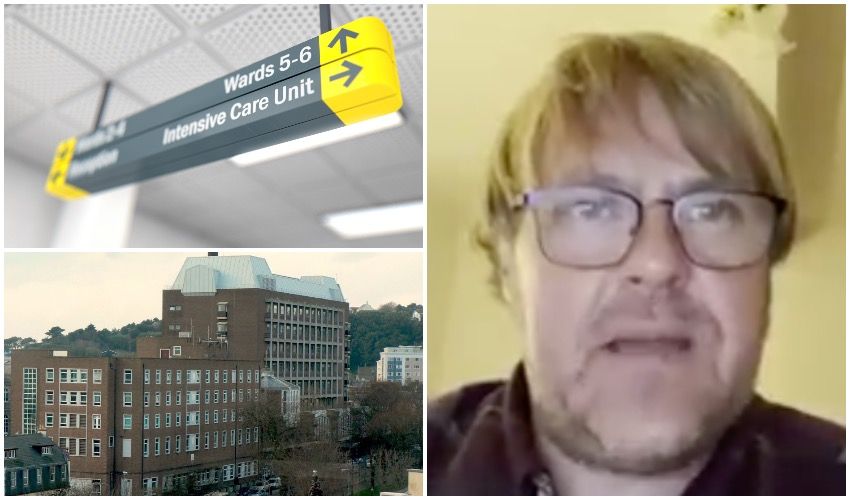 An islander who says he has been failed by the healthcare system in Jersey has recorded a powerful testimony on social media which has been watched more than 3,000 times.

In it, Martin O’Neill, who was left disabled after receiving a mesh implant for a hernia in 2014, identifies what he sees are failings in health provision in Jersey.

Primarily, he puts this down to poor communication, inadequate data collection and cost-cutting by management.

In the 15-minute video, which he posted on Facebook, Mr O’Neill said he had sent Health Minster Richard Renouf three emails, which outlined administrative failings that he had encountered in his eight years of healthcare needs, but he had yet to receive a response.

“We can create a world-renowned banking system but when it comes to healthcare, it is left floundering. Why?

Pictured: Mr O'Neill's video has been shared on social media.

“We do not need UK civil servants who are on exuberant wages declining and deciding clinical pathways and directions of our clinicians while telling them that money is tight.

“All the while, it is the patient who suffers, ultimately, the negative effect of these administrative decisions.”

Mr O’Neill, who is known on the local music scene as the lead singer for ‘Joe Young and the Bandits’, eventually had his mesh removed in Germany last year.

Although he still feels painful spasms, he says he now wakes up every day thankful that he now longer has the unbearable pain and other effects caused by the mesh, which put him into intensive care multiple times and could leave him paralysed from the waist down for days.

In his video, he recalls an agonising flight back from a doctor’s appointment in London in June 2020. Fortunately, a GP on the aircraft was able to administer liquid ketamine to alleviate the pain.

He says Health told him he was one of five islanders who had had an adverse reaction to a mesh, but he has spoken to treble that number of people who had been adversely affected by the device.

“We need to capture data because we need to prove, quarterly, that we have a better healthcare system and not to be taken on face value,” he said. “We need a system that allows patients to report their own outcomes and proves by data, and not by voice, what is going on.

“It is time we make changes to benefit our healthcare system and not kick the can down the road. We are angry because we are not listened to.

“Our healthcare system is failing us now and it will in the future unless we act now.”

Specifically, Mr O’Neill calls for the creation of a medical ombudsmen, a ‘patient council’, made up of ex-clinicians, GPs and patients to advocate for the latter, and a more robust complaints procedure.

“I say nearly 75% of complaints walk away because they simply don’t have the energy to trudge through a gargantuan pile of nonsense,” he said.

Government has said that it is preparing a statement in response to Mr O’Neill’s concerns.

Posted by Bernadette Palmer on Apr 6th, 2022
Well done. That was beautifully described and very accurate of some of our healthcare. Our family has also been waiting for a return telephone call from Renouf, except ours has todate been a wait of over two years. He knows we’re here but chooses to ignore my family. My niece has been left totally disabled but negligence from a hospital surgeon. We have begged for physio and other care for her but what she has been given and nothing come to the same thing. She was moved out of Overdale after a few days of arriving there due to it being supposedly being used for Covid patients. From then on (over two years ago) she has just been left with barely any help or treatment. Treatment which Queens Square Hospital in London said was essential to her recovery. She has been left totally disabled unable to walk, talk, feed herself needing 24hour care, the majority of which is done by the family. A beautiful healthy 48 year old wife and mother just left on the shelf.
Posted by Private Individual on Apr 6th, 2022
I couldn't agree more with the sentiments of Mr. Oneil.

Too much money wasted on a hospital debacle than on training and recruiting frontline staff.
To place a comment please login Login »