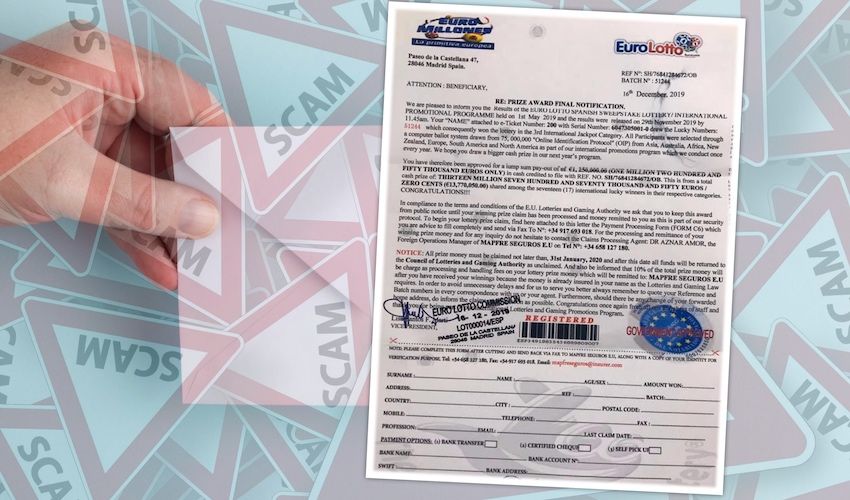 Dozens of islanders have been crowned 'winners' of a €1.25m lottery jackpot...as part of an international scam aiming to nab their details.

Jersey Post says it has recently intercepted a number of letters announcing lottery 'success', and is now urging islanders to avoid falling victim to the fake jackpot.

The scam letter, which appears to have been sent from Spain, asks the recipient to provide personal details as well as payment information.

Pictured: The letters appear to have been sent from Spain.

Bearing a 'EuroMillones' and EuroLotto logo in its header, it is dated from 16 December 2019 and aims to “inform” the recipient they have won €1.25 million in cash in the ‘Euro Lotto Spanish Sweepstake Lottery International Promotional Programme’.

“This is from a total cash prize of €13.770.050 shared amongst the seventeen international lucky winners in their respective categories. Congratulations!!!” the letter says.

It then asks the “lucky” beneficiary to fill in the attached ‘Payment Processing Form’ and send it back via fax so that they can receive their funds.

It also notes the winner should “keep this award from public notice until your winning prize claim has been processed and money remitted” to them, citing the lottery’s “security protocol” as the reason.

Jersey Post shared a copy of one of the letters on its Facebook page, describing it as “another lottery scam targeting individuals on the island”.

“The lottery scam letter appears to come from Spain and many are incorrectly addressed,” they added.

“We are trying our best to intercept these, however if you receive one of these letters, please be vigilant and do not respond to this correspondence.”

It comes after a series of almost identical letters – only the dates have been changed – were sent to islanders last July.

At the time, Police urged islanders to “ignore the letter and bin it”.

Can you find the post office a new home?