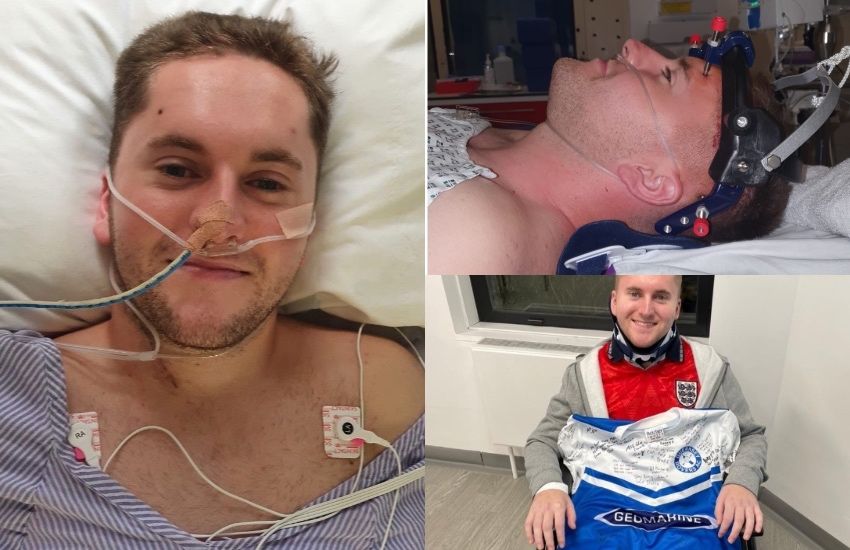 On 18 September last year, Connor Bayes’ life was changed forever when a 15ft fall left him paralysed from the chest down, now NHS staff shortages are impeding his chances of recovery.

With the first year being the most essential for recovery, the Guernseyman's family is fundraising to get private, specialist treatment for the 23-year-old.

In circumstances which would be unimaginably difficult for anyone, Connor is remaining positive.

“I was walking home after a night out in town with my friends and was very close to home when I fell over a wall,” recalled Connor.

“...I was knocked out and was unconscious for maybe half an hour before I woke up face down on the ground and realised I couldn’t move.

“I called out for help but must have blacked out again because I only have a vague memory of seeing a guy on a phone calling an ambulance for me.” 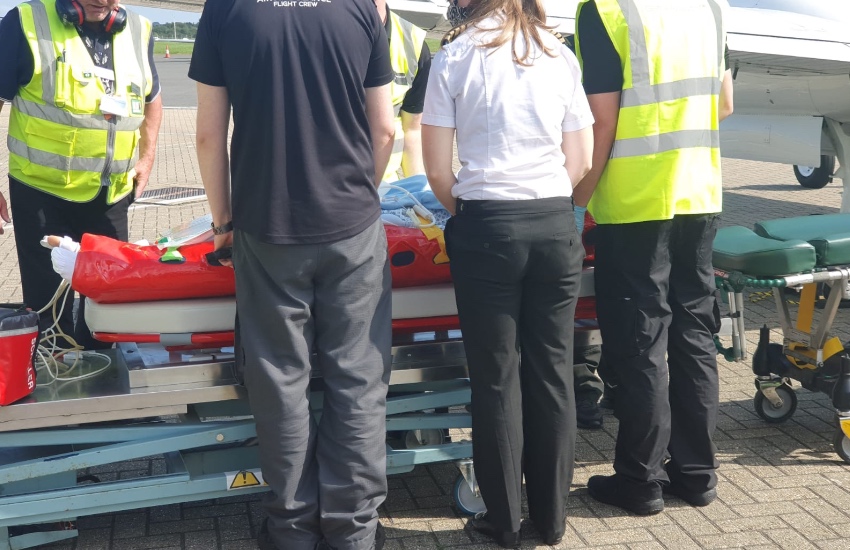 Pictured: Connor's accident happened around 03:00 and he was taken by Medivac to Southampton Hospital the same day.

Connor was taken to the accident and emergency department where it was discovered that he had broken his neck, dislocating two vertebrae.

It was decided that Connor needed to be flown to Southampton for treatment. His mum, Kay, travelled with him.

“I was the first person allowed to accompany someone in the Medivac since the covid restrictions were lifted; the crew were initially apprehensive about letting me go with him, but luckily they allowed it,” she said.

“Connor was conscious but almost numb from everything and still had an adrenaline rush so he was uncomfortable but wasn’t complaining more than that.

“It was mind-blowing to have been told that he had broken his neck in Guernsey and then be on a plane the same day not knowing the extent of the damage or whether he had suffered any head injuries; you are literally faced with life and death.” 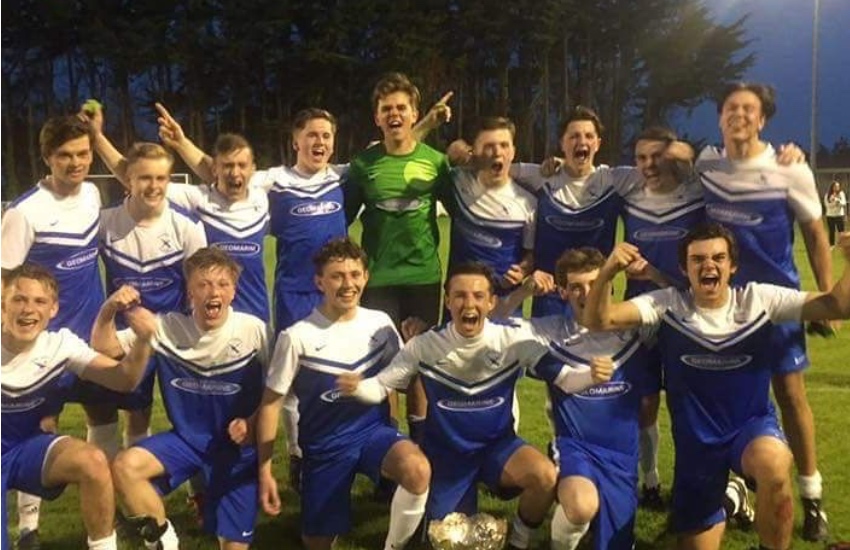 Pictured: Connor, who played football for Rovers, said he was at "peak fitness" before his accident.

Upon arrival at Southampton Hospital Connor was given x-rays and MRI and CAT scans.

“He was pushed away from me and when he came back there was a halo brace screwed into his skull,” said Kay.

“We were told that he had a very bad dislocation of his vertebrae and his spinal cord was severely bruised.

“They (the medical staff) didn’t know what the outcome was going to be and they gave us the worst-case scenario that Connor may never regain any movement and that we still didn’t know if he had any brain injury; this was all still on the same day.” 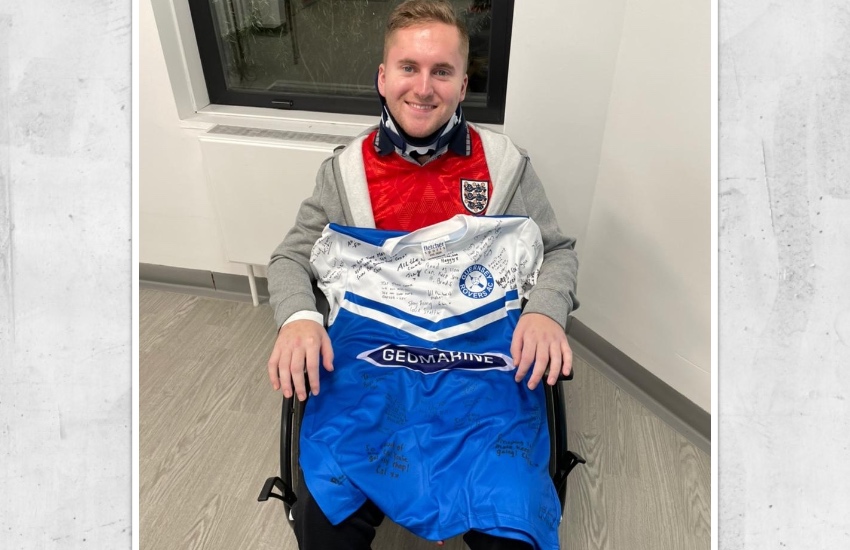 Pictured: Connor's teammates signed a shirt for him to help boost his morale as he continues treatment.

Connor was taken to the intensive care unit and had a weight attached to his halo brace in the hope that it would help “pull his head up”.

“Unfortunately, the weight didn’t work overnight and Connor was given spinal surgery that day (19 September) to try and align his spine as much as possible,” said Kay.

“I was told that the surgery would be around eight hours and that he would likely be in a coma for three days afterward; he was out of surgery in four hours and was fully awake and talking right away.” 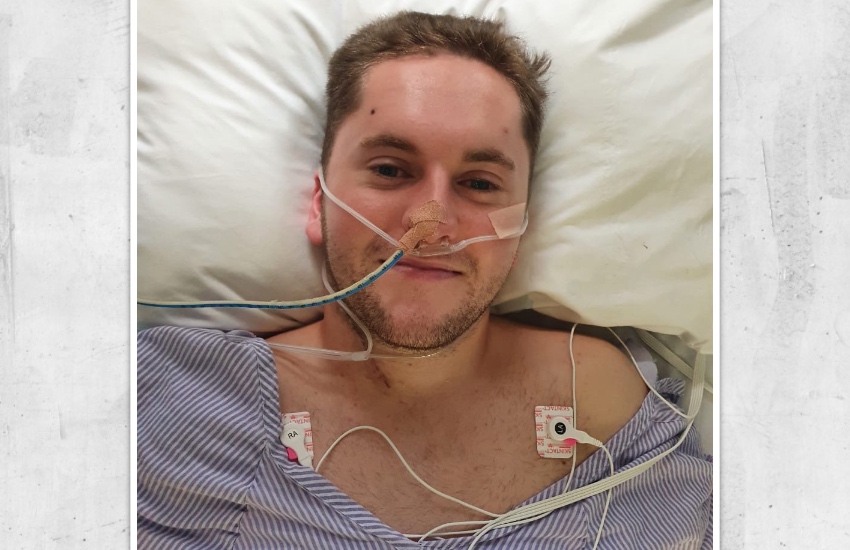 Kay said that she had expected nothing less from Connor.

“I was weaned off the breathing apparatus much quicker than anyone thought I would be; I’d like to think that I’m a fighter,” said Connor.

Connor was in intensive care for three weeks in Southampton then spent one week on a neurological ward and a further two weeks on a spinal ward.

“I was waiting to be given a place in a rehabilitation hospital and was told that I could go to Salisbury, which is known as one of the best available so I was pretty buzzing to be going there, but it turned out to be a disappointment,” said Connor. 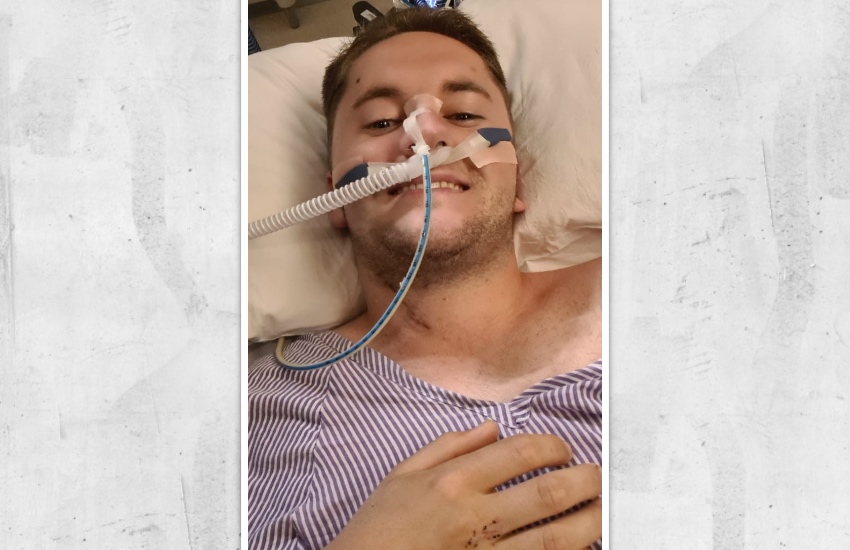 Pictured: Connor was expected to be in a coma for three days after surgery, but was awake and talking immediately.

“We were told that Connor would receive daily physiotherapy, occupational therapy and hydrotherapy to help his recovery,” said Kay.

Connor was moved to Salisbury on 15 November last year.

“By 2 January the UK was in a covid lockdown again and patients weren’t allowed to leave their bays in the hospital,” continued Kay.

“Connor’s gym sessions were all canceled and he couldn’t have hydrotherapy or occupational therapy, the only thing he could have was physiotherapy for six weeks. The wards reopened for one week, then closed again for another month." 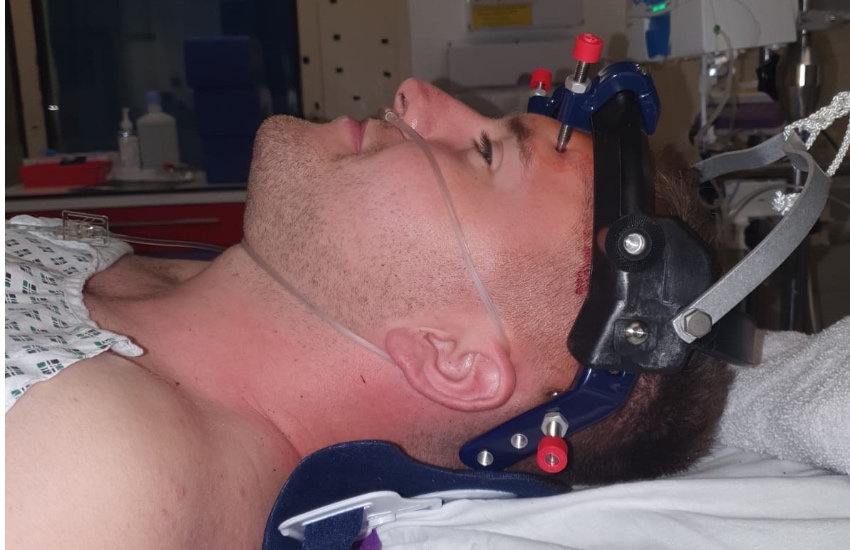 Pictured: Overnight treatment of a weighted halo brace in Southampton failed to pull Connor's head up after his accident.

Kay continued: “We were told that Connor should be using a standing treatment daily to help realign his organs, he has only been able to use one three times since October.

“There were serious staff shortages even after things opened back up and Connor wasn’t being given the treatment he needed.”

The States of Guernsey have been funding Connor’s treatment in Salisbury.

“I contacted the States and told them what was happening and that we were not happy. They were grateful for the information because it might help other people in the future and they said that they would fund Connor’s treatment in another NHS hospital,” said Kay.

“Staff shortages were happening across the board of the NHS, and Salisbury had meant to be one of the best hospitals for Connor, so we were felt that another NHS hospital would see us end up facing the same problems.” 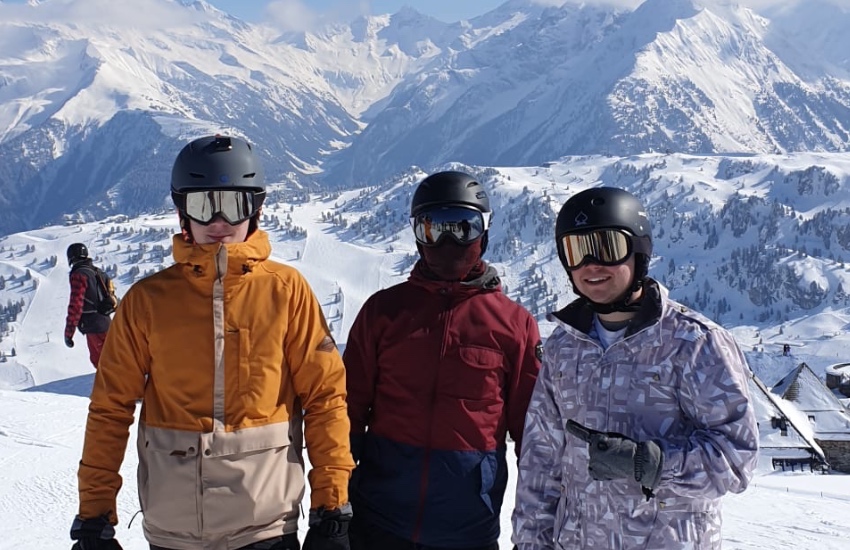 Pictured: Connor is a keen snowboarder and hopes to one day return to the slopes "in some shape or form" in the future.

Before his accident, Connor had lived an active lifestyle.

“I had been seeing a personal trainer for two years so was not only exercising but was also eating correctly and was at my peak fitness level,” he said.

“I am big into football and played Rovers since I was three. I also loved snowboarding and would try to go once a year. I had finished my carpentry apprenticeship and had started a new job six weeks before my accident.

“Initially I had very limited use of my arms and no use at all of my wrists and hands. Now I move my arms a bit more and I have the odd flicker of feeling in my hands." 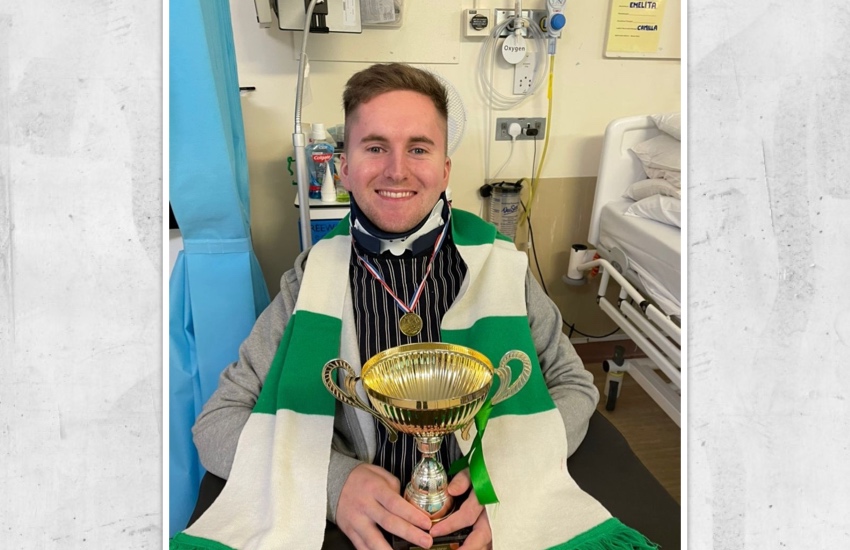 Pictured: Connor's six-a-side football team, Les Green Mango FC, won their league and his friend brought the cup to the UK for Connor.

Connor continued: “I’ve been told that I have the highest chance of recovery within the first year after the accident and that, after that, the chance of recovering feeling is at least halved.”

“Hobbs has five different locations across the UK, each specialising in a different area. We have managed to get Connor a consultation, which will be on 26 May, where it will be decided which facility will be best for him,” said Kay.

“If anybody can have a chance of recovering, it’s Connor, because he has the right mindset; he is positive and he wants to work hard and to be able to go to Hobbs and get the best treatment he can to give himself the best chance possible." 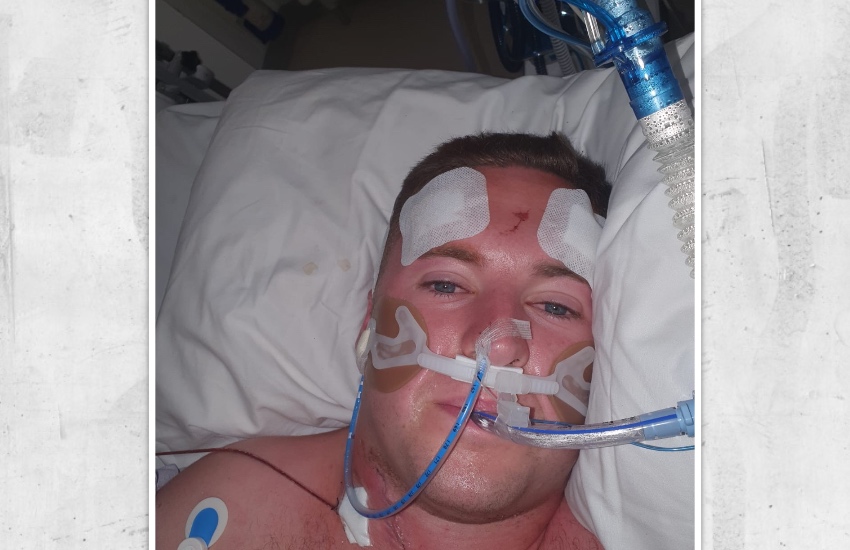 Pictured: Connor after his spinal surgery, which was expected to take eight hours but was completed in half that time.

Kay continued: “Connor makes me want to burst with pride for how he has handled things; he had very open eyes to his situation and is having to rethink his entire life.”

Connor said that he has always had a positive attitude.

“I’m just taking things day by day at the moment; I’d love to eventually be able to return to the slopes in some shape or form but I know there is a long road ahead,” he said.

“I’ve tried to stay positive; it’s not about what I’ve lost, it’s about what I’ve still got. I’ve developed a saying that it’s not that I can’t do something, it’s just that I haven’t found the way to do it yet.”

Since Connor was taken to the UK, Kay has not returned to Guernsey. 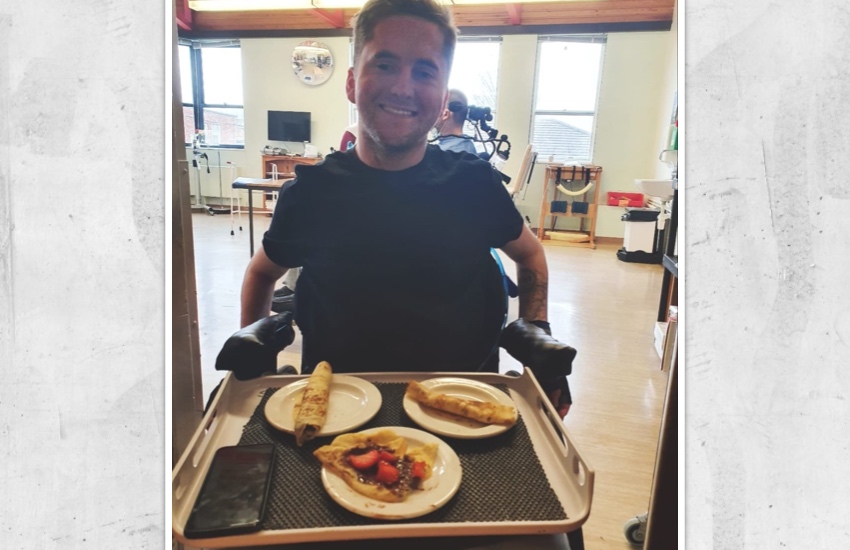 Pictured: Connor has been undergoing occupational therapy and assisted with preparations on pancake day this year in hospital.

“I work remotely during the day and then I spend the evenings and weekends with Connor,” said Kay.

“His sister, Brodie, and dad, Mark, have been coming to visit him every three weeks. He has even had some friends come to visit over the long weekends.

“It’s made all the difference to have my mum here with me, it’s been such a massive help and I feel lucky to have had visitors because some of the other patients haven’t had a single visitor the whole time I’ve been here,” said Connor.

Kay said that the expenses of the trips for the family were “starting to pile up” and that the cost of treatment at Hobbs is open-ended because it is dependent on how long he needs to be there.

“We haven’t had exact costs confirmed yet, but it is likely that he will be given a two-week trial placement in one facility, which will cost around £8,000 for the treatments and a further £4,000 or so on top of that for his accommodation,” she said. 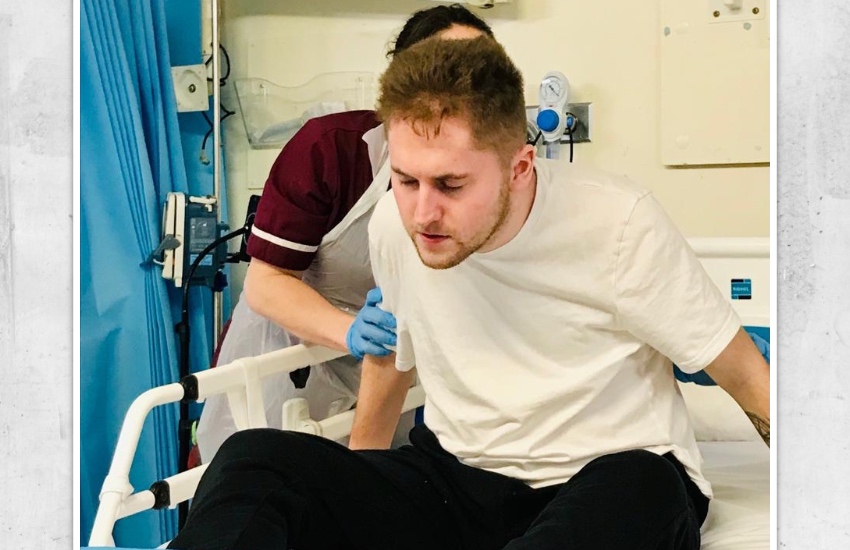 Pictured: Connor has been "working hard" with his physiotherapy treatment, but hopes for more progress under private care.

Kay continued: “If he does well in that placement he will be moved to another facility but, until we know where that will be, we won’t know exact costs but they are likely to be higher than the two weeks on the placement.

"Connor isn't able to be transferred yet so we will also need to purchase a wheelchair accessible vehicle and other implements in order to give Connor a better quality of life at the moment."

Brodie started a crowdfunding campaign for Connor and people have started donating towards his treatment costs.

“I’ve been absolutely blown away by the donations made so far; it’s really beyond belief, I didn’t expect it at all,” said Connor. 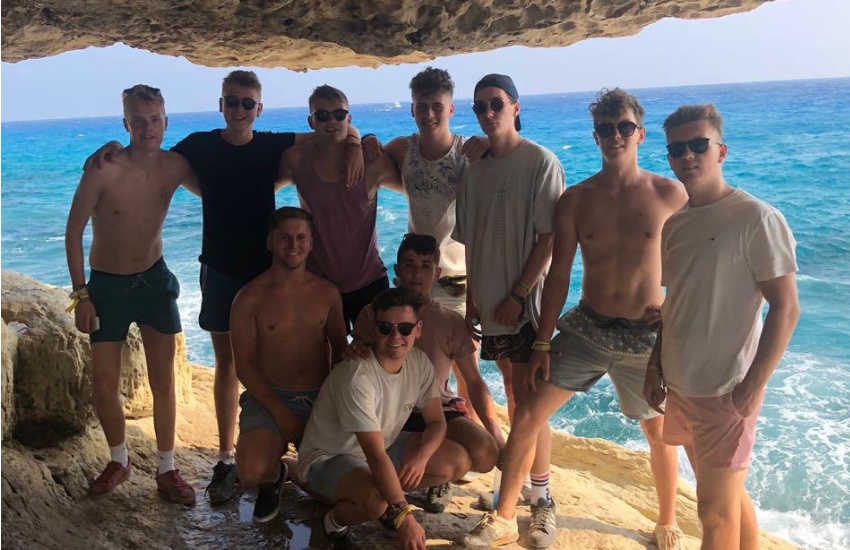 Pictured: Connor on holiday with a group of friends before his accident.

Kay added: “Connor is adored by everyone and we all want him to have the best possible outcome from his treatment.

“We don’t want to look back in two years’ time and say that we wish we’d tried to get him the treatment and that he could have, and should have, had a better recovery. We need to do this now while he is still in his first year of recovery, and we are so grateful to every single person who has donated towards hopefully getting him to the Hobbs facility.”

You can donate to Connor’s fundraising page HERE