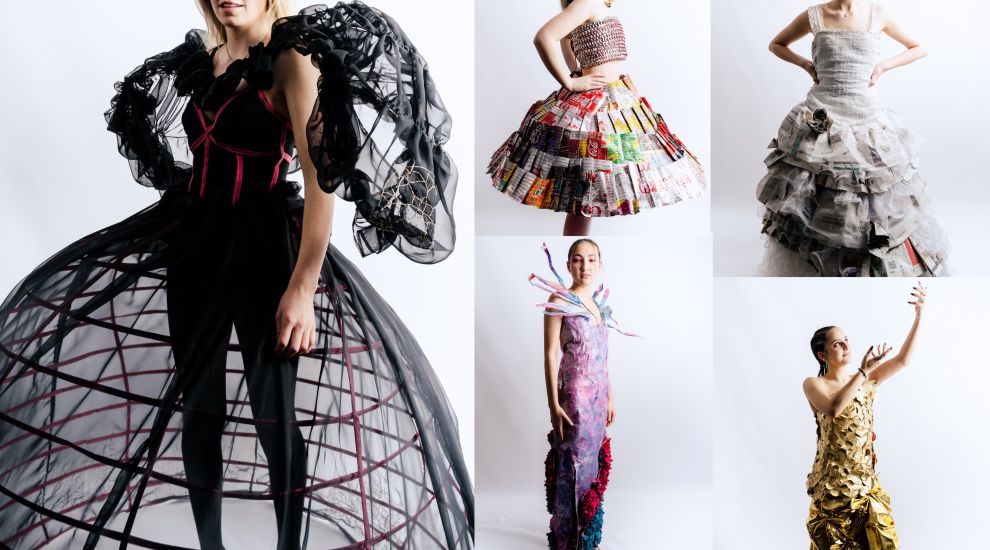 From a golden Beyoncé homage made from discarded cans to a wedding dress of ‘newspaper negativity’… junk designs dreamed up by Jersey students have been selected out of thousands to compete in a prestigious London competition judged by a TV presenter and top fashion tutor.

Junk Kouture is a sustainable fashion competition in which students are invited to model haute-couture designs made entirely from recycled materials.

Year 12 Textiles students from Jersey College for Girls have been invited to the live finals which will take place at the Hackney Empire in London on 19 May.

“Each team really engaged into the brief and designed their pieces around individual themes. They sourced recycled materials from all types of places and came up with innovative ways in which to manipulate the material to create sculpture and embellish to add detail and texture," said JCG Head of Textiles Bianca Padidar.

She said she was "so proud" of the girls' efforts, adding: “They have exceeded my expectations with their designs, and skill, collaborated so well within their teams and built up the confidence now to go and perform in front thousands of people!"

JCG shared the stories behind each team's creation... 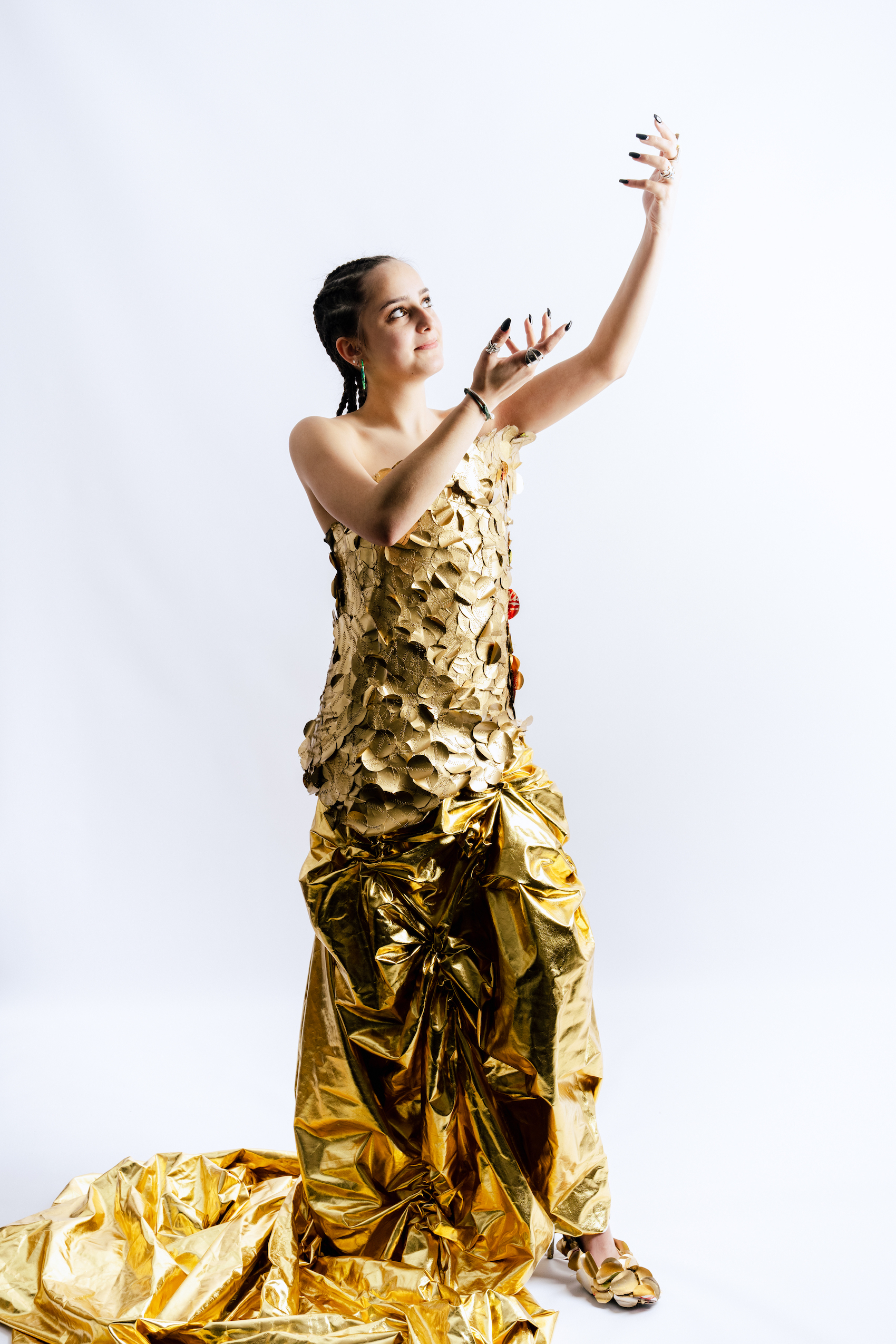 Beyoncé’s 2019 Met Gala outfit was the inspiration for this dress made out of about 200 cans collected from the College’s bins. “It was literal junk,” the students explained.

Sofia, Maddie and Maddy cut the cans into coins, spray painted them and then stitched them all together to create the dress, a process which took them about three months. “A lot of effort was put in,” they said.

They didn’t hesitate to take part in the competition as fashion is their passion and they had never done “anything like it”. They are very much looking forward to the live show, which they said will be a “quite exciting” opportunity for them.

by Anna, Charlotte and Bonnie (17) 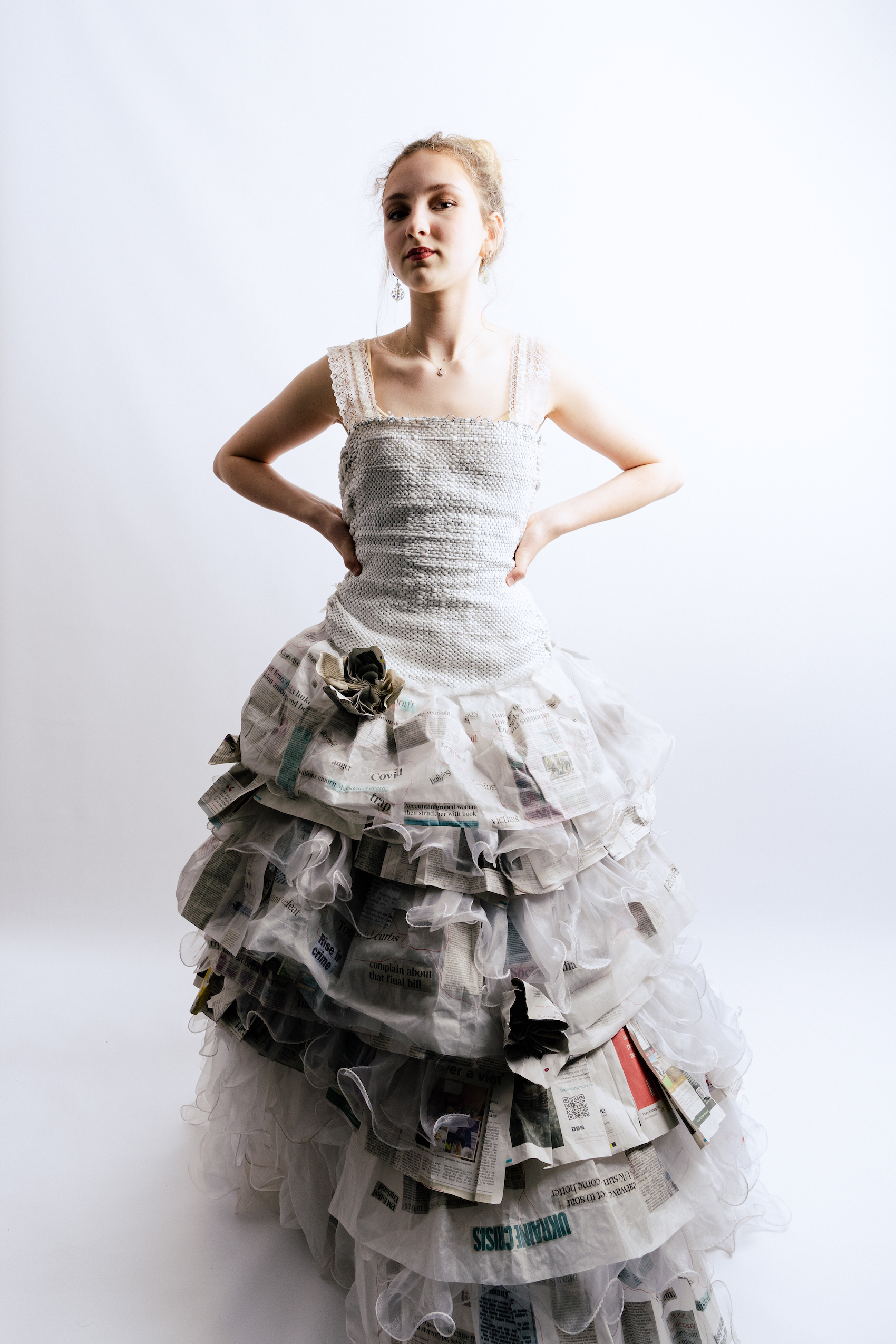 This dress was inspired by negativity in the media. It features negative articles published in newspapers which pollutes society as well as recycled bags, as plastic pollutes the environment.

The newspapers’ articles and bags were added to a recycled wedding dress, along with recycled lace. All of the plastic used for the dress was recycled and the shoes the model is wearing were also second hand.

It took the team three months to create the dress with Bonnie working on the woven bodice whilst Anna and Charlotte pleated and sewed the newspapers’ articles. “It was easier to give everyone a task,” the team said.

The trio joined the competition as they liked its concept and thought it would be a good experience for them. They didn’t expect to be selected for the live show and said it was a “big surprise” for them.

SOS (Save our Sea) 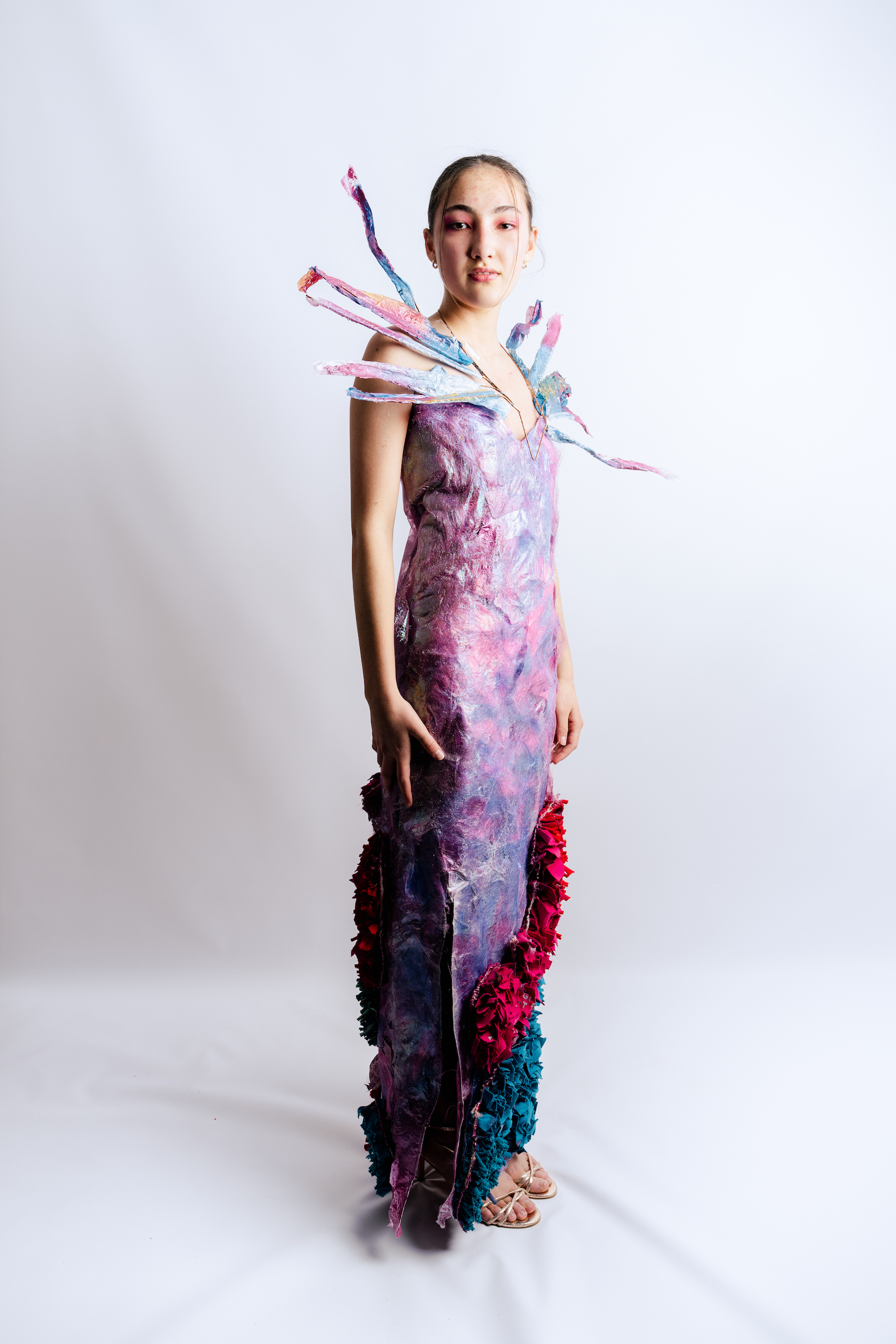 Sonia and Emily’s dress was heavily influenced by their experience of living on a small island surrounded by the sea. “The first thing that came to our mind was the sea and we thought about what pollutes the sea,” they explained.

They used heat to fuse plastic bags together with Angelina fiber and welded recycled to create the distinctive top piece. They also cut tee shirts into small pieces and stretched them to make circular shapes before putting them onto coffee bags to create a “coral reef structure” on the bottom of the skirt. The whole process took about four months to complete.

Neither Sonia nor Emily could quite believe they had been selected for the live show. “I genuinely thought it was fake,” Sonia said. “I thought this isn’t real, it can’t be happening.”

Emily added: “I had to model so I didn’t know what to say. We never thought we were going to be selected.”

Take me to Church 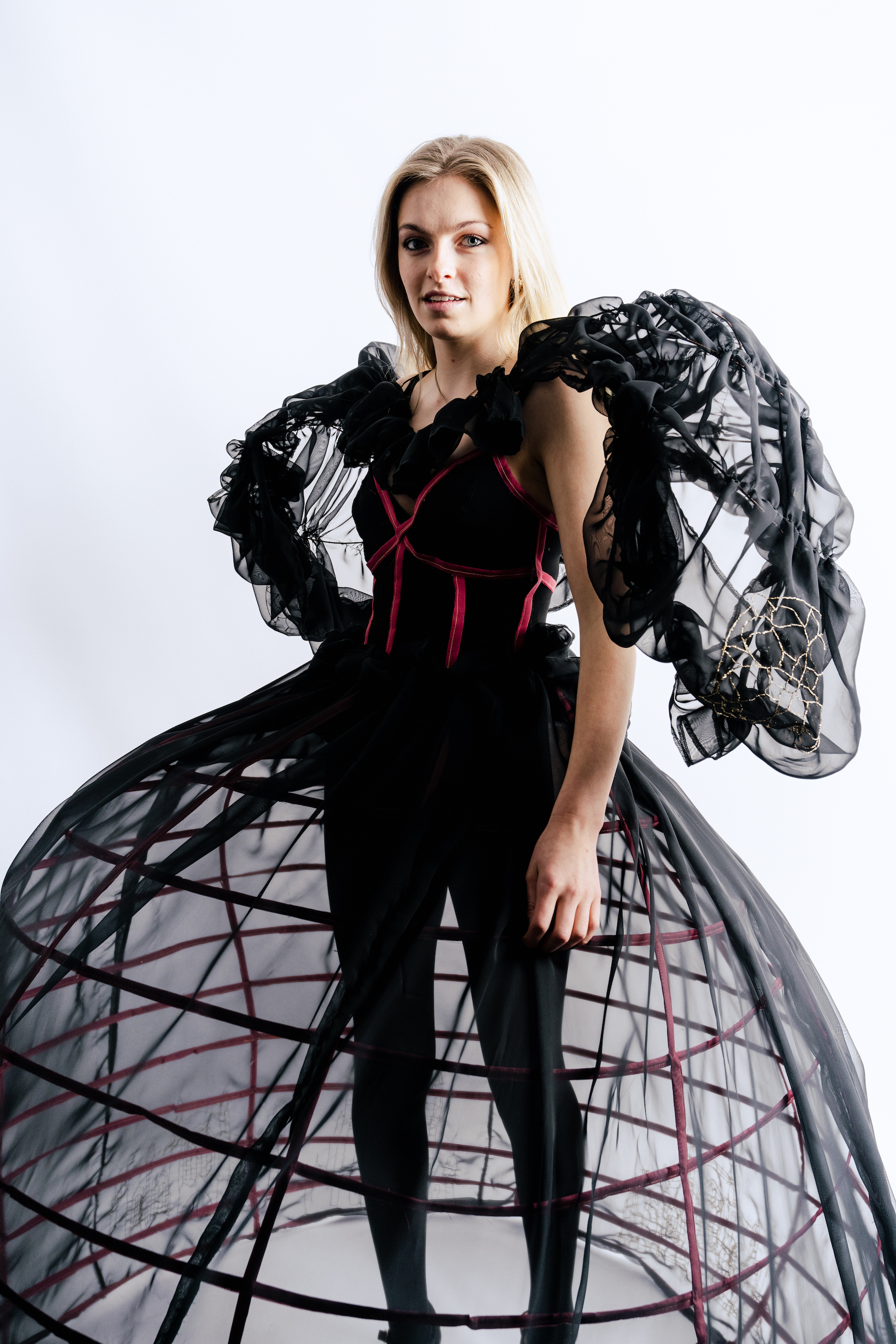 Gothic architecture and looking at the structure of buildings influenced the creation of the dress.

The team used curtains donated by Sunshine Blinds, copper wire found in a skip, as well as black chiffon fabric and a bodysuit from a charity shop.

Kimberly soldiered the wire together whilst Erin and Jasmine worked on sewing the pockets that go around the wire over four months.

They were keen to join the competition as they were very interested in reusing materials and they were “surprised, confused but happy” to hear about their selection for the big show. 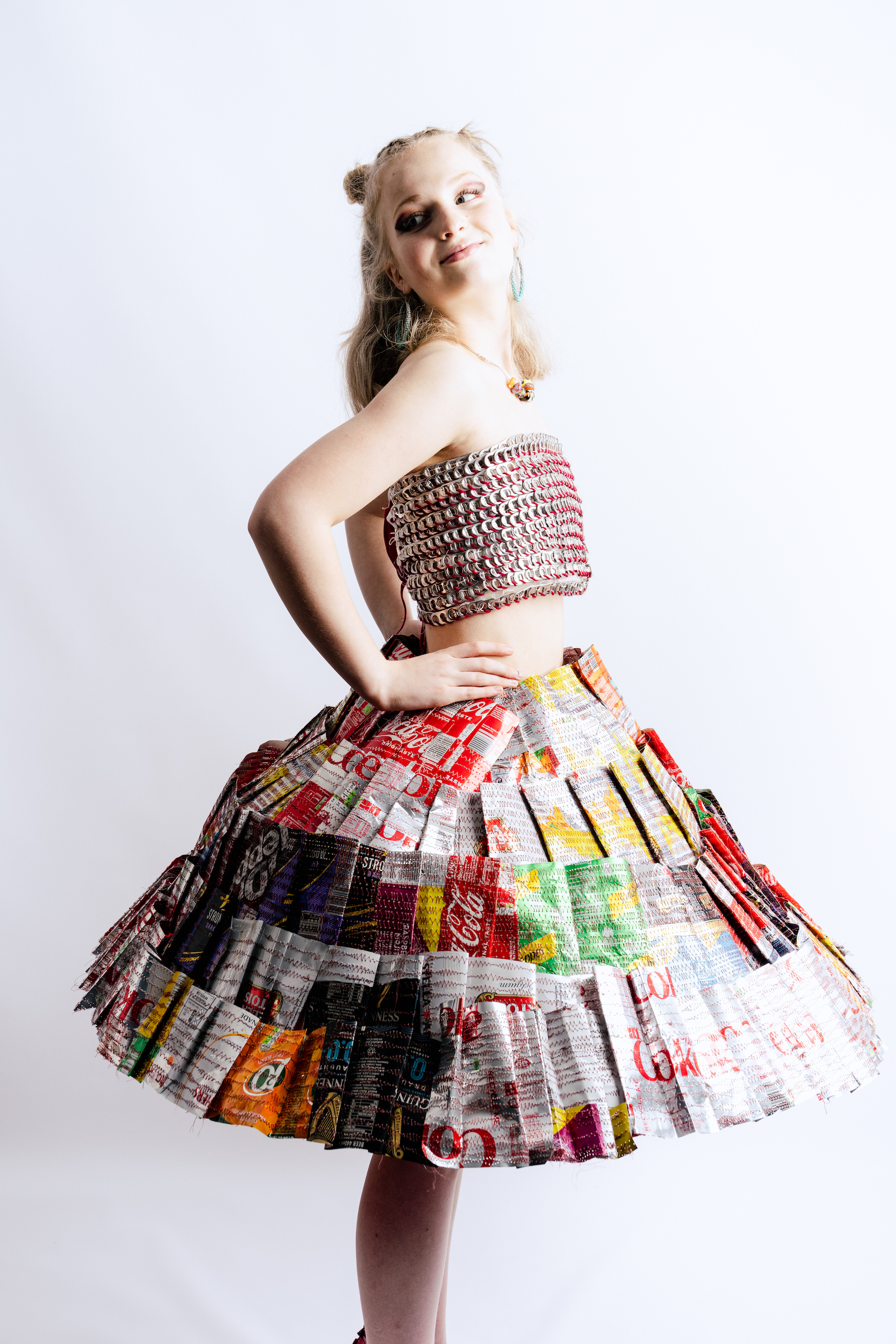 Protection was the main theme for this outfit with the team citing the ideas of armour and the skin of an armadillo as inspiration.

They used cans to create both the skirt and the top. For the former, the cans were sewed together with a sewing machine, embroidered and pleated on a base. The top is made of a mesh base on which the cans’ pull tabs have been woven. It took three months to create.

The team took part in the competition because of its sustainability angle.

“It really highlights the issue we have in the environment particularly with fast fashion where pollution is prominent,” they said. “It shows people you can make and reuse things.”