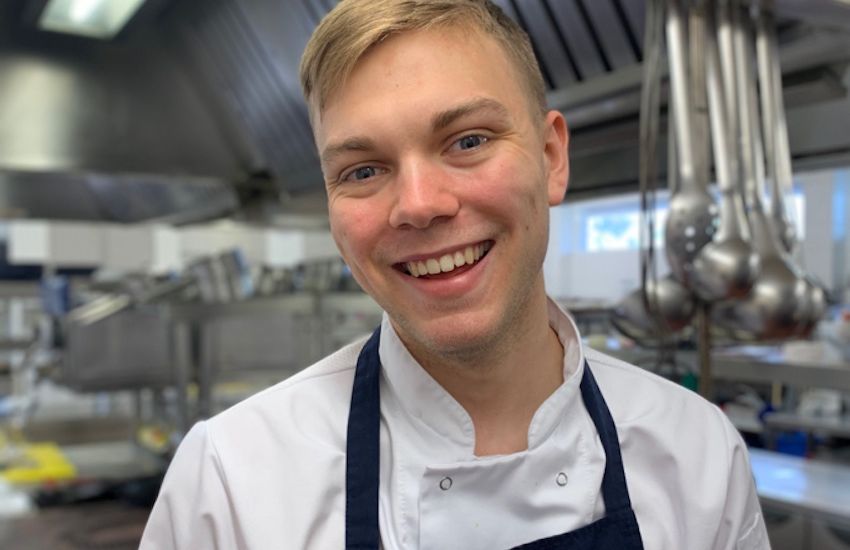 A young Jersey chef has scored himself a place on the podium, with his “spectacular” dishes featuring local produce winning him third place in a national cooking contest.

George Harding saw off competition from the nation’s best emerging chefs to nab bronze in the ‘Young national chef of the year’ championship, having risen through the ranks of the prestigious competition.

Recently appointed Senior Chef de Partie at the Atlantic Hotel, George honoured his island roots in the dishes he made for the judges by using local produce including Jersey mussels.

George was selected for the competition after a string of qualifying contests before battling it out against nine other emerging chef talents at the high-pressure final round in London at the beginning of this month.

The ten finalists were tasked with creating two different vegetarian or vegan canapés for the starter and a Norwegian cod main course appropriately garnished and served with an emulsified hot, warm or cold sauce, finishing with a plated dessert using a classic Victoria Sponge as a base.

George made sure to put his own Jersey twist on the dishes he presented, putting together a “spectacular three-course menu with hero ingredients from Jersey itself.”

The judges ranked George’s dessert with the highest marks of the round.

Pictured: The Chef de Partie's dessert scored the highest marks in the round.

Patrick Burke, Owner and Managing Director of The Atlantic Hotel where George works, said: “All of us at The Atlantic are immensely proud of George for his achievement in the Young National Chef of the Year final. The skill levels exhibited by the competitors were extremely high and he delivered three outstanding dishes to claim his podium place.

“I understand that his dessert scored the highest marks of all, which is quite something when you are competing against the best young chefs from the best hotels and restaurants in the country.”