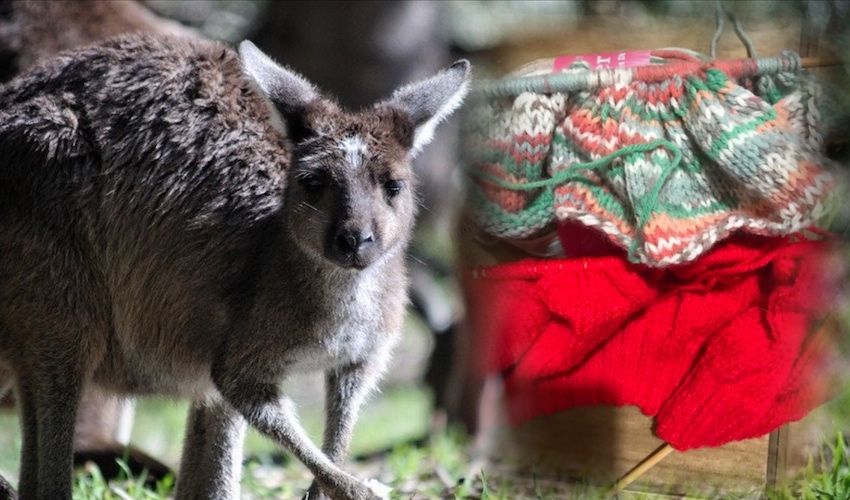 Jersey crafters are ‘stitching’ in to help Australian wildlife devastated in bushfires by hand-making woollen pouches, blankets and nests for them.

The crafting charge was led by local knitter, Hannah Fitzgerald, whose family connections with Australia and love of animals prompted her to get her needles out, and make her first pouch for an orphaned kangaroo.

Since then, she’s joined the national movement of craftspeople up and down the country who are tirelessly sewing, knitting and crocheting to bring some relief to the animals affected by the fires which are still burning across the continent.

Now, Hannah’s looking for even more Jersey crafters to join her efforts to give the Australian wildlife the best chance at survival in the wake of the natural disaster.

Pictured: Several islanders have donated materials so that Hannah can make more products.

Express caught up with Hannah about her involvement in the crafty solution to what she described as “an ecological nightmare”...

Hannah explained: “Back in September when news broke of the bush fires in Australia, I was in constant contact with my family over there. Luckily they live in Melbourne, but they were telling me of the plight of the many animals that were losing their habitat. Knowing I have rescued animals of my own they have kept me updated.

“So, I got my knitting needles out and made my first make-shift joey pouch. It turned out okay, so I made six more and a nest and posted them over to Australia to be given to local wildlife shelter to be passed on to the rescue efforts in New South Wales.”

It was at this point that she came across a Facebook group, ‘UK Crafters for Australia Animal Rescue Effort’, which compiled official patterns and sizes of what was needed on the ground, and she started appealing for friends and family to donate all their unused wool and material so that she could make more things.

Reiterating the extent of the devastation, Hannah emphasised: “New South Wales has suffered the worst drought and fires in years; many homes and acres of land burnt to a crisp. And they are only half way in to the summer period. It truly is an ecological nightmare."

Explaining how each of the knitted products help different species, Hannah said that joey pouches are needed because a lot of kangaroos that have just given birth have left their new babies orphaned through smoke inhalation, burns or starvation.

“Joeys need and stay in their mothers pouches for nine months and making our knitted pouches mimics their mother’s, [and gives] the feeling of safety while rescuers bottle feed them.”

Nests for birds whose roosts have been burned as well as blankets and wraps to protect burned or shocked creatures are also needed.

Speaking about how Jersey can help, Hannah told Express: “I’m hoping to reach out to more knitters and crafters from beginners to very, very experienced. Don’t just think they will have enough! Australia suffers bushfires year on year - more and more of these animals habitats are turning to dust; more animals are being rescued than ever before. They need the knitters and crafters of Jersey.”

Having heard about Hannah’s efforts, Jersey Post has also offered their support so that she can post all of her knitted goods to Australia for free.

David McGrath, Head of Marketing at Jersey Post, said, “It has been heart breaking to watch the devastation caused by the bushfires in Australia.  We are grateful that we are in a position to assist islanders in sending their knitted pouches and blankets to help the plight of the animals who have lost their natural habitat.”

And it’s not just Jersey crafters who are doing their bit – this weekend the Parish of St. Helier has set up a ‘Relief Run’ to raise money for the Australian Red Cross to help support those affected by the fires.

The run will start at La Frégate at 09:45 on Sunday (19 January), and there will be a half marathon route as well as a 5K route.