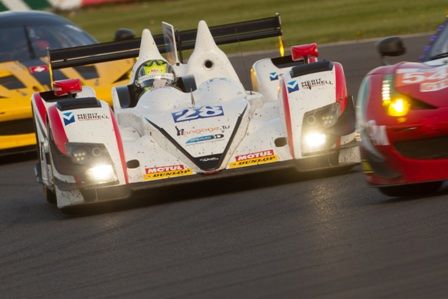 The former Victoria College pupil was part of the three-man team that finished sixth in the four-hour endurance race in the LM P2 Class at Silverstone, out of 11 teams.

James said: “After getting comfortable in the car with only a few laps in free practice on Friday I was really looking forward to returning to the ELMS during the four-hour race on Sunday.

“My team mates, James Littlejohn and Tony Wells, were in the car before me and I did the last two stints of the race. To claw back some time we went long with the tyres to save time during the pit stops; but this meant double-stinting the left side tyres and triple-stinting the right hand side.  Even with old tyres though the car balance was really good.

“I'd have loved to have had more running in the car and had a go at qualifying but maybe next time.  I was really impressed by Greaves Motorsport and you can see why they have had the success they have had over the last few seasons.

“Their attention to detail was fantastic and the quality of staff that they have is amazing. I was made to feel at home straight away.”