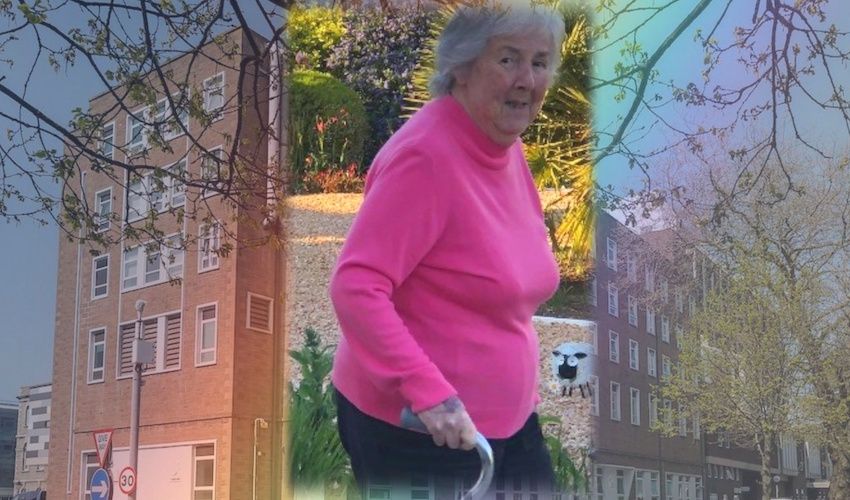 An elderly woman has more than quadrupled her fundraising target to treat the hospital workers who cared for her after she had an accident last year, by doing sponsored laps around her garden.

Setting herself the challenge 53 days ago as she began to get her mobility back, Lorna Hopley has now racked up 53,000 steps – the equivalent of making it up Everest and almost being back at base camp.

Modestly setting out to buy the hospital staff a tin of biscuits as a ‘thank you’ for helping her after she broke her hip, arm and shoulder in November last year, Lorna has now raised over £2,000 – smashing her original total of £500.

After her accident, she had to spend eight weeks in hospital to recover and now she wants to do something to treat the staff who looked after her there.

On her JustGiving page, she wrote: “The money raised would go to treats for the hospital staff, hopefully enough for a good old knees up when the virus has ended, but realistically probably just tins of chocolate biscuits and tins of chocolates, both of which I know they love.”

Pictured: Lorna has more than quadrupled her fundraising target.

Inspired by Captain Tom – a British Army Officer who has been going on walks to raise money for the NHS – Lorna challenged herself to do 1,000 steps a day, or two laps around her garden for five months.

Lorna still has three more months of walking ahead of her and is encouraging as many islanders as possible to keep donating.

Posting a update message, Lorna said: “I started walking for the purpose of my JustGiving page 53 days ago, which equates to 106 laps of my garden 53,000 steps at least. Which means I have climbed Mount Everest and am nearly back at base camp.

“Thanks to all of you we have raised the magnificent sum of £2000, but it’s ground to a halt. So, I’m begging you to keep putting my page out there and asking your friends to share too, please. We need fresh faces to donate and I need encouragement to keep me going for the next three months.”