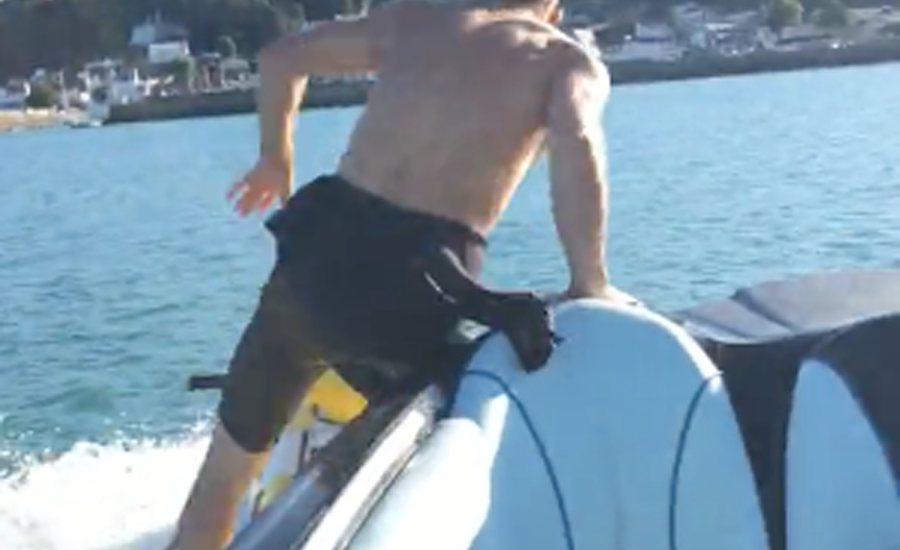 It might look like a scene out of a James Bond movie but it happened right here and you can watch just how a group out wake boarding in St Aubin's came to the rescue of a jet skier who'd lost control of his jet ski last night.

Robin Smith and Adam Vautier were heading back to shore on board Robin's boat 'Black and Blue' at about 19:00 last night when they spotted the jet ski heading straight for them with no-one on it.

Adam said: “Robin moved the boat out the way, I was in the water at the time. I remember thinking why is he zooming out the way, I thought he was leaving me in the Bay and then the jet ski went between me and the boat, headed towards St Aubin’s Harbour wall and obviously there were more boats there, there were canoes, and two or three paddle boarders.

“The jet skier was shouting so I knew he was alive and there were other jet skiers around. Robin moved out the way of the jet ski, turned around and came and got me. We decided to chase the jet ski before it hit anyone else.

“I walked up to the front of the boat and the plan was for me to pull the kill switch. I couldn’t reach the kill switch so I decided to jump on the jet ski.

"I’m quite nimble and I’ve had jet skis before and been boating all my life. I wouldn’t have done it if it was too unsafe. I’ve been around the sea all my life. I wasn’t jumping on something I didn't have experience with.”

“He had already been very close to us when we were wakeboarding and I mentioned to Robin that he wasn’t wearing a lifejacket.

"It just shows how someone’s own decision can then affect others. It then affected our safety. The short of that was that he wasn’t wearing the kill switch either."

Robin who was driving the boat said: “The first thing I did was get us out of the way and then I took off after it to try and manage it and get it out of danger of people.

"Adam was hoping to try and reach the kill cord, to stop the engine but we got up alongside it and we were going about the same speed so Adam decided to jump on it, which was pretty brave, then he drove it back to the owner.

"We're always out in the Bay, we're always aware of what's going on and we did it in the safest way."

The jet skier told Adam he wasn't wearing a life jacket because he didn't like wearing them and Adam hopes the incident has made him think twice.

Adam said: "I said where’s your lifejacket. He said I’m fine, I don’t like wearing them. I then said you’re not fine, the only reason you are fine is because we are here. It would have been a different story if that jet ski had hit someone."

Jersey Coastguard say the incident should have been reported to them last night and are urging people to head out on the water properly prepared.

Jersey Harbour Master Captain Phil Buckley said: “I am concerned that this incident was not reported to Jersey Coastguard at the time.

“This incident could so easily have ended in tragedy and I would remind water users that they must take their personal responsibility for their own safety while at sea seriously and ensure they use the appropriate equipment and that it is in working order.

“Kill Cords and lifejackets are a must for everyone using high powered craft such as jet skis.”

The Coastguard have since tweeted this link with advice on using kill cords.