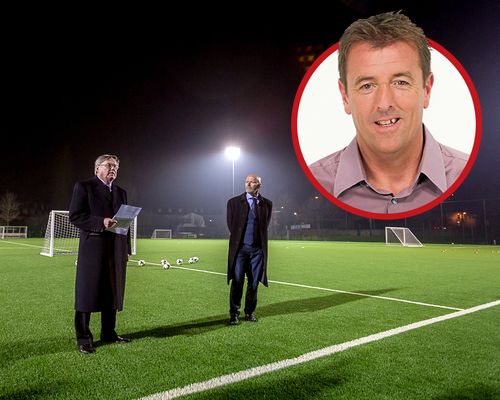 The Guernseyman thinks the Island’s first 3G synthetic pitch costing £800,000 is vital for the future of the sport and hopes it will help more young players from the Channel Islands to kick off professional careers.

Former Southampton FC captain Matt Le Tissier said: “Jersey now has a high quality 3G playing surface that will enable young grassroots players, as well as the wider local community, to play football all-year round, which is why these types of facility are so vital.

“I’ve seen myself, the excellent 3G pitch facilities that the Premier League & The FA Facilities Fund, delivered by the Football Foundation, is developing right across the country. Clearly playing football on these types of surface is going to be a far more attractive prospect for youngsters than on a quagmire, so they do help to get more people playing the game purely for pleasure of doing so which can only be a good thing.

“So who knows, we may see a few more talented youngsters developed in the Channel Islands as a result. The States of Jersey, Jersey FA and everyone that has worked hard to make this project a reality deserve huge credit for what they’ve achieved.”

The Junior Muratti teams were the first to kick-off on the pitch last weekend and one of the Island's sporting heads is confident it will help youngsters to play a better game at a higher level.

“It’s going to be able to meet our needs to play representative matches and it will be great for coaching.

“It means that players have access to a fantastic facility on a regular basis, the bounce is so true, the ability to pass the ball is always going to be true, technically they will become better.”

The States stumped up half the cash to pay for the new surface and the Football Foundation pitched in the other half for the work that was carried out by both local and UK contractors.

Leader of The FA Council Barry Bright said: “It was an honour to be in Jersey to officially open the excellent new 3G pitch at Springfield Stadium. The second report from The FA Chairman's England Commission stressed the importance of investing in grassroots facilities, supporting coach development and avoiding participation decline amongst 16-21-year-olds. St Helier’s new 3G facility, which The FA has funded through the Premier League & The FA Facilities Fund, expertly delivered by the Football Foundation, is the perfect example of how football’s governing bodies are working together to tackle the issues highlighted by the Commission.

“The Jersey FA has produced a five-year Football Development Plan (FDP) which will ensure that the Springfield Stadium becomes a central hub for football on the densely-populated Island. The high-quality playing surface will enable football participation at the site to increase significantly and provide a venue for FA coach education courses, ensuring a sustainable future for football in Jersey. I’d like to thank everyone who helped make this project possible and I look forward to watching the development of football on the Island.”

Assistant Sports Minister Steve Pallett said: “The feedback from the first game – the Junior Muratti which we won, the feedback was that it’s incredible, beautiful, well sprung, it’s flat so it enables them to play great one touch football, they don’t have to worry about hitting bumps and lumps.

“It is quite tiring on the legs playing for ninety minutes on it because it hasn’t bedded in yet, the pellets are still on the top but that will be sorted with half a dozen matches on it.”

In a year you normally get about 50 matches on it, 1,500 a year. We’re looking to get 1,000 people using it a week, that’s a huge increase in numbers using it – community groups, schools and then obviously the evening 11 aside matches.”

The pitch will be the venue for most of the matches during this summer’s NatWest Island Games but it’s not just the pitch that has had a makeover. The whole project at Springfield cost just over £1 million and includes a new play area, new car park and the ball park has been re-done too.