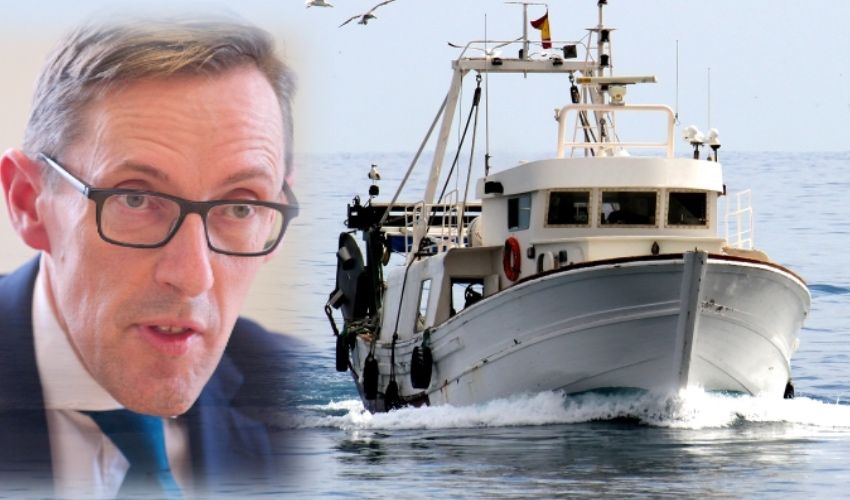 Jersey is locked in a standoff with Europe over “discriminatory” checks that will be carried out on local fishermen’s produce – but not that of their French counterparts – after Brexit.

The hurdle is a major one the External Relations Minister is hoping to clear as 1 January edges closer.

After 12 days of secret negotiations between London and Brussels, which included the fate of the Crown Dependencies, the two sides are taking a break today to brief their respective sides on progress.

It is thought there has been some progress since negotiations restarted, but not enough to announce an imminent breakthrough. The UK government insists it is still preparing for the possibility that talks will collapse without reaching agreement on a deal before the end of the transition period next month.

The longer the negotiations go on, the less time the States Assembly will have to scrutinise, debate and pass any legislation required under the deal.

External Relations Minister Ian Gorst told Express: “I have committed to put any deal that we might want to agree to the States Assembly for approval, which is absolutely the right thing to do, but that could be challenging if, say, a deal doesn’t happen until December.

“We already have the Government Plan to debate, we’ll have to engage with Scrutiny, and consult with the public, which could all be fairly fraught in the run-up to Christmas. We really do need to keep covid under control in order to deliver that.”

Senator Gorst added that there was no significant progress in defining Jersey’s own position after 1 January, which has to be presented to Brussels by the UK.

On the contentious issue of fishing, he said that Europe had refused to budge on its insistence that statutory checks of Jersey produce arriving at its borders are carried out.

These ‘Sanitary and Phytosanitary Checks’ would add a costly burden to Jersey fishermen landing their catch in France, yet they would not apply to French fishermen, even if they caught fish in Jersey’s own waters, which they are currently permitted to do under the Bay of Granville Agreement.

Jersey is arguing to maintain the status quo - so that Jersey fishermen landing produce caught in the shared waters, as defined in the agreement, would not be subject to these uncompetitive checks.

Senator Gorst said: “We have said that we believe that the Bay of Granville Agreement forms a very good basis for a future relationship but it is fair to say that if there are SPS checks in the way that the EU is currently suggesting, it makes it very difficult for us to maintain that current position. Because at the end of the day, we can’t have a discriminatory approach to our waters.

“We have maintained the principle that a fish caught in our waters by a French vessel should be treated in the same way when it goes into the European market.

“Europe, however, is maintaining its view that they want these SPS checks in order for our fishermen to access the French markets, and therefore we are saying that that creates an unfairness.”

Senator Gorst added that, while Jersey wanted to see the reciprocity of the Bay of Granville Agreement maintained, he appreciated that it fell short in other areas.

“There are three things that are important to us when it comes to fishing: the sustainability of our waters, which is about our control of them; access to the European market; and the issue of tariffs. We are trying to manage all three of those together but the Bay of Granville Agreement has only ever been about access to waters.

“From the outset, our position has always been that any future relationship has to connect all three of them.”

Senator Gorst said he was confident that the UK was negotiating on behalf of Jersey in good faith - despite the recent inclusion in the UK Fisheries Bill of a ‘Permissive Extent Clause’, which gives the UK the right to legislate on Jersey behalf, without seeking the island’s approval.

“I have continued to engage with UK parliamentarians and ministers on this issue,” he said. “The Bill is to be laid in the Lords very soon, so there is a lot of ongoing engagement to see, even if it can’t be amended, to make it constitutionally correct. That is still a work in progress. A PEC is acceptable to us, providing we have agreed to it.”

Overall, Jersey’s position on goods is similar to the UK’s in that it does not want to see tariffs imposed.

Posted by Keith Marsh on Nov 4th, 2020
Surprise, surprise the French find it hard to understand that "a fish" caught in Jersey waters, going to market in France is still the same fish, no matter what boat lands it.
Keep up the good fight, Senator Gorst, you never know.
To place a comment please login Login »