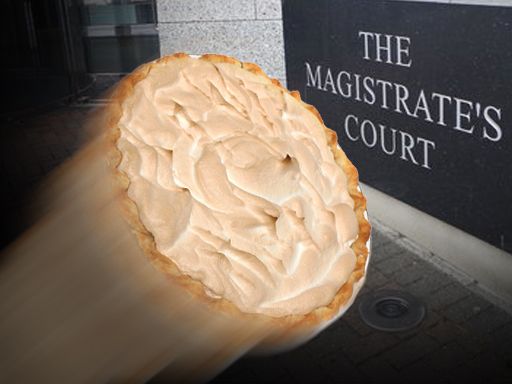 Brian Renouard, 75, admitted a charge of common assault and driving with excess alcohol following a bizarre incident on July 10th.

Renouard came home drunk and threw a lemon meringue pie at his wife - and although he missed, the court told him he had still technically committed an assault.

Prosecuting Advocate Darry Robinson said: "The brief facts of the case are that the defendant came home drunk. His wife was terrified after he arrived home after he remonstrated with her.

"He reacted by throwing a lemon meringue pie recklessly at his wife."

When asked about the incident, Renouard said: "I did throw it but if I had meant to hit her I would have hit her. I know that."

Magistrate Peter Harris said: "That is still an assault even though there was no physical injury. It has really come down to drink."

Renouard said: "That's why I have decided to abstain. I haven't had a drink since."

Later that same day Renouard was stopped in his car by police officers who found two bottles on vodka on the passenger seat of his car.

Advocate Robinson said: "The defendant told the officers 'I am an ex-airport fire serviceman and I am pXXsed out of my head.'"

Renouard was found to have 52mcg of alcohol per 100ml of breath, with the legal limit 35mcg.

Magistrate Harris told Renouard that drinking alcohol had landed him in trouble on numerous occasions.

He said: "I am primarily concerned with the welfare of your wife and to lesser degree yourself. A probation order will hopefully assist you to stay on track and help both you and your wife. It is about preventing re-offending. If you stick to not drinking that is going to help you and if you drink again it will make the process a lot more difficult."

Renouard agreed, saying: "It is causing problems. I apologise for the time I have taken up."

Renouard was handed a 12-month probation order for the common assault and a £1,600 fine, plus 18-month driving disqualification for the offence of drink driving.

Posted by Scott Mills on Nov 12th, 2016
surprised he wasn't burned at the stake. So missing now gets you a criminal record of common assault. All along in fights I was there thinking that dodging a punch could have led the bloke to be prosecuted for common assault. Can imagine walking into the police HQ, I want to report a common assault, a lad threw a punch at me, he missed, can I do him common assault. Answer's on a postcard. I fear that Air will be sued by defendants soon. 21st century Jersey at it's best. Wonder what it would have been had the woman been drunk and threw the pie, and was over the limit for driving?
To place a comment please login Login »